From p.240 of "Twentieth century impressions of Hong-kong, Shanghai, and other Treaty Ports of China", published in 1908:

In the opening days of Hongkong's history as a British Colony, ice was imported from the North and stored. Later on, the Tudor Ice Company imported ice from America, a sailing ship arriving annually with the Colony's supply, and many old residents can remember the ice ship lying moored close to the foot of Ice House Lane, and the ice blocks being stored in the present Ice Depot, which gives its name to the street on either side of Queen's Road. The only year in which the ice ship failed to put in an appearance was during the American Civil War, when it was captured and burned by one of the Confederate cruisers. The importation of American ice continued until 1874, when two young Scotchmen, Messrs. Kyle & Bain, erected one of Dr. Kirk's damp-air machines, which proved so complete a success that the Tudor Company were compelled to withdraw. Later, another of Kirk's air machines was erected.

In 1879, Messrs. Kyle & Bain sold their property to Messrs. Jardine, Matheson & Co., who formed the business into a limited company with a capital of $125,000, and now act as general managers. The original machines and also some later machines have long given place to three ammonia compression machines, while the ice-making tanks have been quadrupled within the past twenty years. The ice is made on the plate system, and nothing but pure, hard, transparent crystal ice is sold by the Company, which is believed to be the only company in Asia producing this quality of ice.

For local consumption the ice is carted to the town depot, but to shipping it is sent direct by boat, the works at Causeway Bay being most convenient to the harbour. In 1900 the Company extended their business by building a range of insulated cold stores, now of a capacity of 50.000 cubic feet. These have added revenue to the Company, and are largely taken advantage of for storing meat, butter, &c., from Australia, and game from the North, as well as local produce. The British naval and military forces at Hongkong are now principally supplied with Australian frozen meat from these stores.

In 1884, the Company purchased from the Government the property in town known as the Ice House. A portion of the ground-fioor is used as otfice and ice depot, the remainder tieing let on lease to suitable tenants. The Company has had a remarkably successful career, the capital remaining at $125,000 — the renewals, extensions, and new land and property acquired since the formafion of the Company having all been paid for out of profits made during the intervening years. Mr. Wm. Parlane, who is still with the Company, has been manager during the past twenty-four years.

In 1914 they expanded again, buying the site and ice-making equipment of the old Oriental Brewery at Lai Chi Kok.

In 1918, Hongkong Ice was acquired by Dairy Farm Company, Ltd., which then changed its name to the Dairy Farm Ice and Cold Storage Company. An extraordinary general meeting of the Hongkong Ice Company was held on 6th May 1918, and the shareholders confirmed the winding up of their company, and its amalgamation with Dairy Farm. (See p.4 of The China Mail, 1918-05-06.) 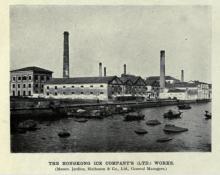 View From The Peak