After the typhoon: Ah King's Slipway 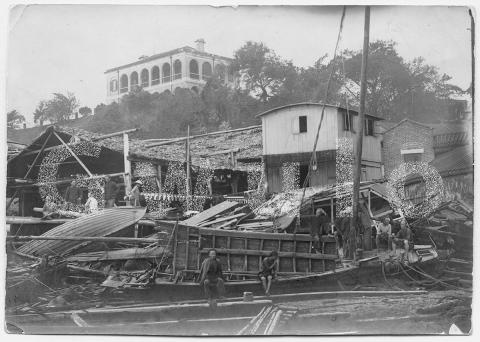 What: Judging by the black paper stuck on the back, this photo must have been removed from an album to sell. 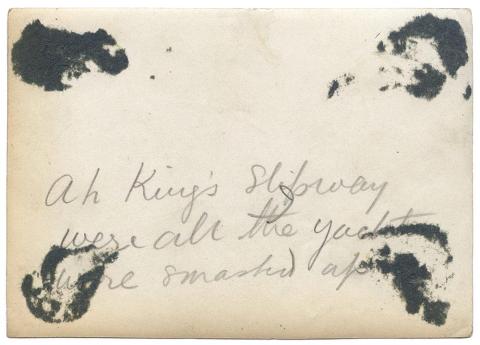 "Ah King's Slipway
were [sic.] all the yachts
were smashed up"

Ah King was a famous boat builder in Hong Kong, well known among the yachting community. This is a photo of his boat yard, showing a scene of post-typhoon destruction.

Here's a closer look at some of the wreckage. 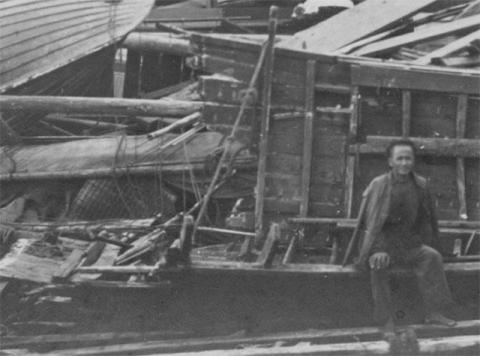 Who: It would be great if one of the men in the photo is Ah King - has anyone seen a photo of him? More likely these are some of his workers. 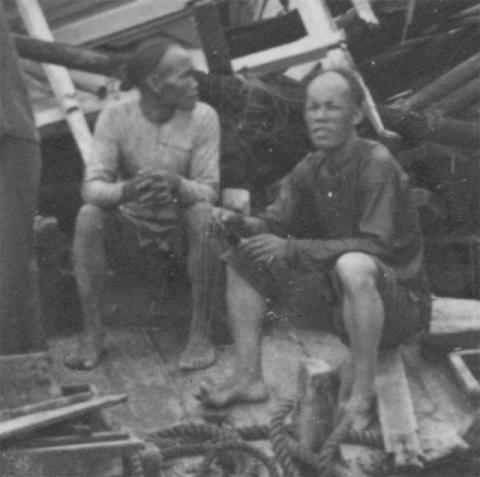 When: The men have the pre-1911 hairstyle of shaved forehead and braided queue. The big typhoon around that time was the one in September 1906, which seems the most likely date for this photo.

Confirmation comes from the post-typhoon report on page 5 of The Hong Kong Weekly Press, 1906-09-22, which describes this photo's scene:

The yachts at Ah King’s and the Corinthian Club suffered badly. About fourteen or fifteen went down, the Dorothy and the Snipe being the only two to ride through safely. The Plover was seen a little lower down, capsized. The launches whose anchors held were almost all dismantled, funnels blown away and decks cleared. Some anxiety was felt as to the fate of the houseboat Marion occupied by Mr. Ramsay and his family but how they fared was not known yesterday. Mr. W. H. Donald lost his thousand-dollar houseboat.

Where: The address of Ah King's Slipway at this time is given as 'Praya East', or Johnston Road on today's maps.

We know the building up on the hill overlooked the modern junction of Wanchai Road and Johnston Road, so Ah King's was somewhere near there. 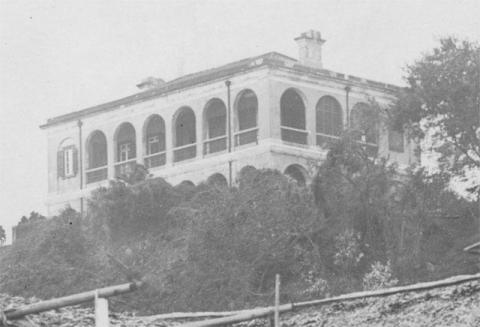 It would be great to pin down the exact location, though. If you have any views of Wanchai from the harbour, can you spot any of these buildings? 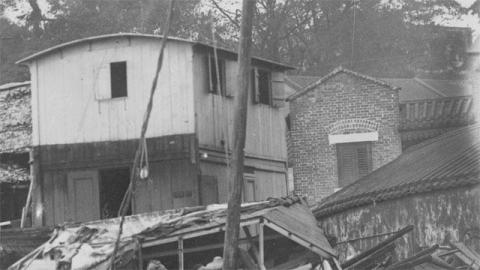 I originally had a different photo in mind for this week, but after Mangkhut's visit over the weekend this seemed more appropriate.

Typhoon Mangkhut has left a trail of destruction across Hong Kong. But after reading about the 1906 typhoon, which killed several thousand people in Hong Kong, we can be grateful for how much safer we are today.

Anxiety about the houseboat "Marion"

The houseboat Marion was probably owned by Alfred Formosa Ramsey, an engineer with the Douglas Steam Company. He married Marion Lysaught, daughter of Inspector William Lysaught. William Lysaught and his family all figure in Patricia O’Sullivan’s book Policing Hong Kong. The Ramsey family was subsequently found not to have been hurt, the article on the typhoon later states.

The hoouseboat is an interesting aside in this story. Was it a permanent dwelling or just for leisure, and where would it have been moored?