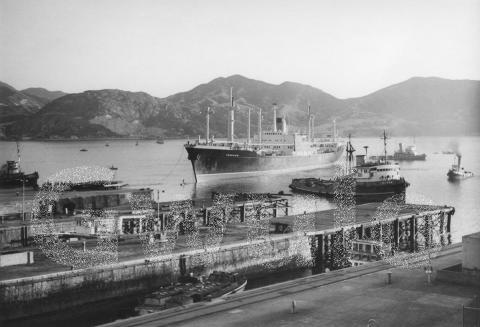 Where: The name of the tug, "TAI KOO" is the clue. Part of its work was to serve the Taikoo Dockyard, and that dockyard is what we can see in the foreground.

We're looking at the eastern end of the dockyard, which had three slips and a large dry dock. I guess the photographer was on board a ship that was hauled up out of the water on slip number 3, the slip at the bottom right corner of this plan.

That would explain the photographer's high vantage point, looking out over slips 2 & 1, with the dry dock beyond them. Here's a photo of this area from a slightly different angle, taken in the 1950s: 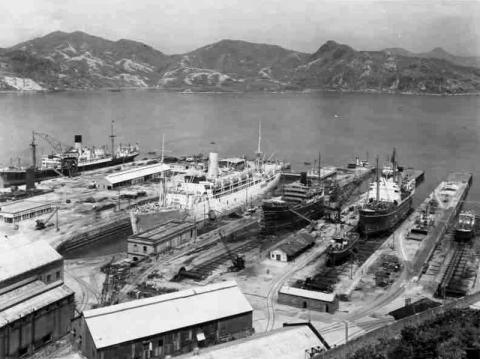 What: Two ships are worth a closer look, starting with the Tai Koo. 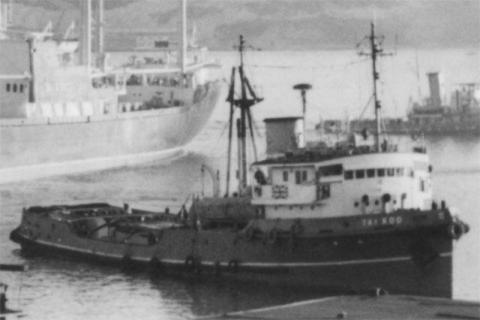 Apart from routine work around the harbour, it was also built to head out into the open seas in all weathers, to rescue and salvage ships in distress.

Here are extracts from the Wikiswire article about this, the third generation of tug named Tai Koo:

[...] It was said 'that she would roll on wet grass'. In a sea the tug would roll like a log, going 25 degrees in the best of weather. The bridge was well for'd, so high and for'd that when she lifted over a big swell in a monsoon sea and crashed down into the trough, the men on the bridge would drop a sickening 30 feet. The Tai Koo III pitched and rolled and corkscrewed so badly that even 'old salts' who had spent their lives at sea fell prey to seasickness. However when towing a large disabled ship the Tai Koo III would dig her stern deep under the waves, and under full power performed well."

The other ship to note is the Norwegian freighter, the Fernview. 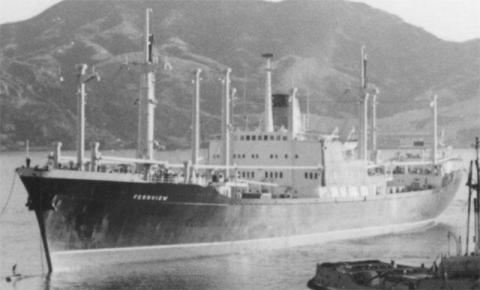 In this photo it's nothing special, just one of the dockyard's many customers. But it made the news the following year, when it collided with a small tanker off the coast of New England. Its bow sliced into the side of the smaller boat, and the tanker later caught fire and capsized.

When: This is the third and final photo in this set. The previous two have shown the result of Typhoon Wanda in 1962, and a ship being broken up off Rennie's Mill that was also dated to 1962. I'm assuming this is from the same year.

Who: This is one of those times it's a pity we don't know more about the photographer. The three photos all show aspects of life at sea, suggesting the photographer was a sailor, but that's all we know.

Here’s a photo of the Fernview after she was lengthened in Japan in 1970 to take 227 containers (one of the many reasons she’s such an interesting ship from the point of view of HK): https://www.sjohistorie.no/no/skip/9767/#&gid=1&pid=1

That shows the pic you have was taken before the lengthening, so certainly in the 1960s.

Interestingly, so slow was cargo handling in pre-box days that neither the collision with the Dynafuel nor the lengthening in Japan seems to have shown up in her scheduling!