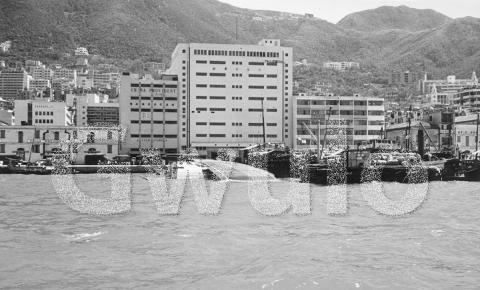 Where: Over at the right edge of the photo there are two spires. 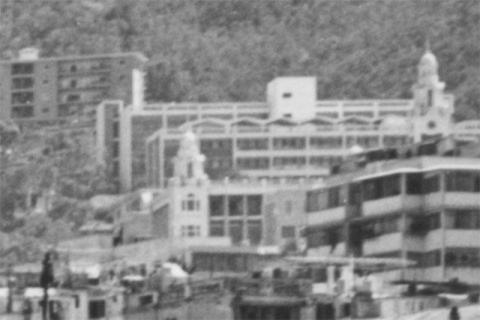 They belong to HKU's main building.

With the University over to our right, the photographer must be somewhere around Sai Ying Poon.

Next, the owner of the two buildings on the left is clear to see. 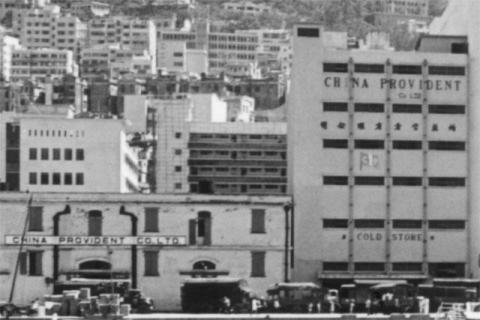 A quick search on Google confirms Sai Ying Poon is the right part of town, as it shows China Provident had Godowns (wharehouses) along Connaught Road West. Godowns 3 & 4 were at 171-178 Connaught Road West, the block west of Water Street where Phase II of the Kwan Yick Building stands today.

When: Did you notice this?

It wasn't obvious when I first looked, as the photo is just a small one. But once it was scanned and enlarged it clearly shows the hull of a capsized ship. The ship was the SS Cronulla, one of the victims of Typhoon Wanda.

When the typhoon hit Hong Kong on September 1st, 1962, it broke the Cronulla free from her government mooring. The ship drifted across the harbour until it ran aground against the China Merchant's Wharf at West Point, the area shown in the photo above. Initially it sat upright but listing to one side. After two days it capsized and that's how it stayed til this photo was taken.

To put a range of dates on the photo we need to know when the ship was salvaged and removed. We know it was still there until the end of 1962 at least, as the Chamber of Commerce reported that "At the end of the year the British ship Cronulla was still lying capsized off the China Merchants S. N. Company's Wharf at West Point." The Fairplay Shipping Journal explained the delay, noting that "Local ship-breakers are reported to be sceptical about whether it is worth raising her." But it also said that the government had only given the ship's owners "six months to remove the crippled ship".

If we assume the six-month limit was enforced, the photo was taken sometime between the ship capsizing in September 1962 and being removed in February 1963.

I'd said that the China Provident's address put this scene west of Water Street. But the quotes above say the Cronulla was next to the China Merchant's Wharf, and that wharf was to the east of Water Street (see the pier's location on a map). They obviously can't both be true!

Another search finds that China Povident had more Godowns at other locations. The 1964 Year Book for Hong Kong External Trade lists several, including Godown No. 19 at 158A, Connaught Road, W. The same page lists China Merchant's Godown nearby at 160-161, Connaught Rd. W., so those seem more likely addresses for the buildings in the photo.

If you have a detailed map of this area from the 1960s, or other photos that show a wider view of this area, please could you look to see if they give any clarification?

The end of Connaught Road's godowns

In the early 1960s when this photo was taken, Connaught Road still ran along the shoreline, with various companies' piers extending into the harbour. Across the road on the inland side were many godowns, supplied from the sea via those piers. That was the way the island's north shore had worked for over 100 years, but by 1962 the shipping world was already starting to use a new technology that would change everything: 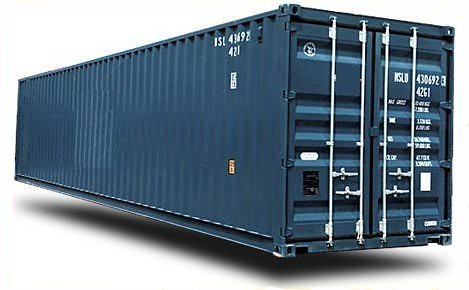 The change happened quickly. By 1976, the first five new container terminals had opened in Kwai Chung, bringing Connaught Road's life as a godown centre to an end. The owners of the old godowns probably didn't shed many tears though, as they could make handsome profits by replacing the old buildings with new housing blocks. The Kwan Yick building is a good example of how the area was re-developed in synch with the move to containerised shipping: its three phases, I, II, and III were completed in 1974, 1977 and 1978 respectively. 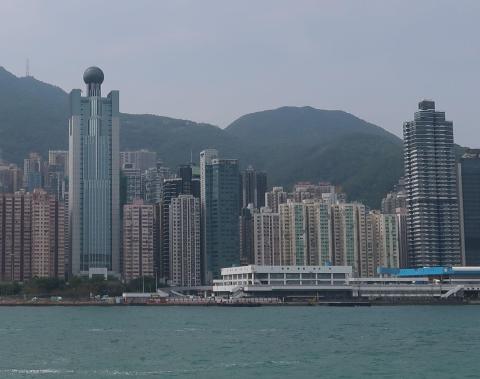 This shows the same area that we saw in the first photo above. The tall building on the left with the ball on top is the Liaison Office of The Central People's Government in the HKSAR. It's just about opposite where the China Merchant Pier was in the 1960s. Look a few buildings to the right to see several cream-coloured buildings with light-green centre panels. They're Phase II of the Kwan Yick Building, my first guess for where the China Provident buildings were located. 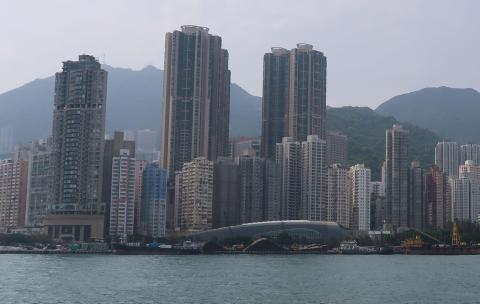 The second photo was taken further west, where Connaught Road West ends, and shows the government's Public Cargo Working Area. All shapes and sizes of goods are unloaded here, so it's the closest we can get to the 1960s Connaught Road environment. 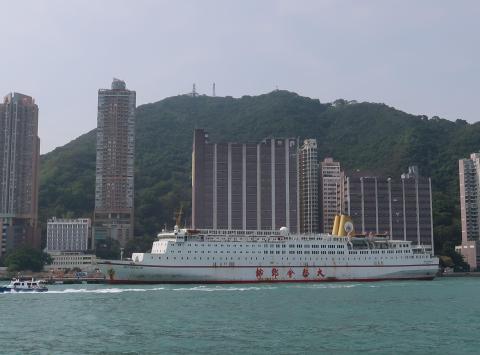 We have to go west again, out through Kennedy Town, to find the last wharf & godown combination that is still in use west of Central. It's run by a familiar name too - China Merchant. There isn't any sign of 1960s-style loading or unloading though - the only ship berthed there is the Metropolis, one of the ships that offers overnight trips from Hong Kong into international waters for gambling.

Greetings.  Interesting photos.  If you had not explained, I would have guessed it was a rapid launching pad for ground-based fireboats.  Regards,  Peter

Photo caption: The S.S. Cronulla blown from Yaumati lists to starboard at West Point where she ran aground.

Some information here about the scrapping of the vessel.

The info about the scrapping is, sadly, wrong. John Manners, the owner offered her for sale on 27th Sept 1962, but could find no buyers. On 16th November the wreck was sold to Chiap Hua Manufacturing Co. Ltd. for salvage, the deal being that they got the ship for free but that all costs for removal and disposal would be theirs to meet. Salvage started not long thereafter and took three months. She was partially refloated on the night of 10th/11th March 1963. By 12th she was clear of the pier, but still with a hefty list to starboard, which had been stabilised enough for her to be towed to Gin Drinkers' Bay for breaking up on 16th March. That was the end of the saga bar the curious report on 2nd March that the Marine Board of Enquiry into the wreck had been adjourned 'sine die' because all the witnesses were no longer in HK. It seems never to have been reconvened.

The pier it sank alongside was definitely the China Merchants' Pier - maybe we need to take into account that it was the longest pier on the HK Island north shoreline, so whoever took the photo, in order to get the wreck, etc. in, needed to be a fair bit to the east of the pier end, hence maybe the angle.

One newspaper story, recounting the actual stranding and before the capsize, notes that the ship "hit the China Merchant Company's pier and the adjacent refuse dump". That boggles the mind.

Thanks Stephen. Good information. I think the refuse pier (dump) was to the west of the long pier. Cheers!

Thanks for the extra

Thanks for the extra information, which gives the date range for this photo as Sep 62 - Mar 63.

Great photo too, which pins down the location as between Western and Chiu Kwong streets: 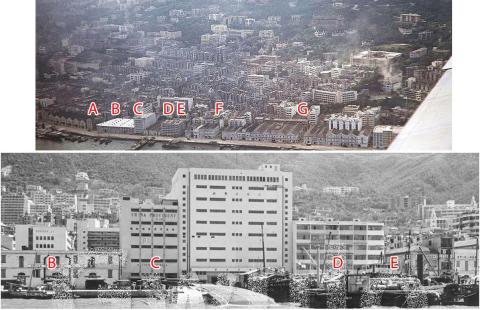 I agree that the refuse pier looks as though it was just west of the China Merchant pier. It probably looked similar to the one off Fleming Road in Wanchai:

It appears that China Provident also had godowns in the area now occupied by Mei Sun Lau and Kwan Yick phase 1. 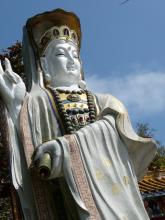