I've looked at this photo many times over the last few months, as it's one that's going into the Gwulo book. It got me thinking about how the cloth baby carrier has gone in and out of fashion. 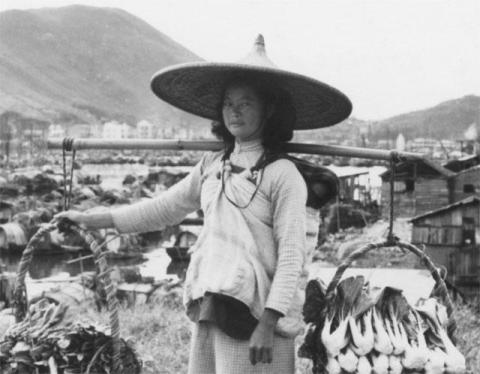 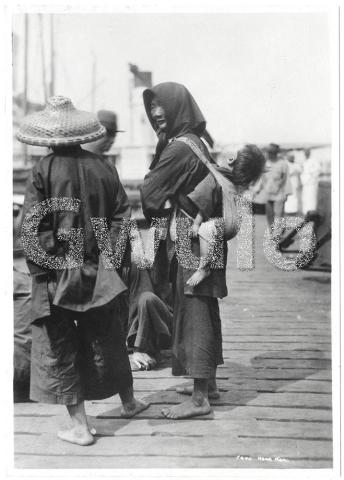 The carrier has a very simple design: just a square of material with a strap at each corner, often with embroidery to add some colour. You can see some stitching on the carrier in the photo above. 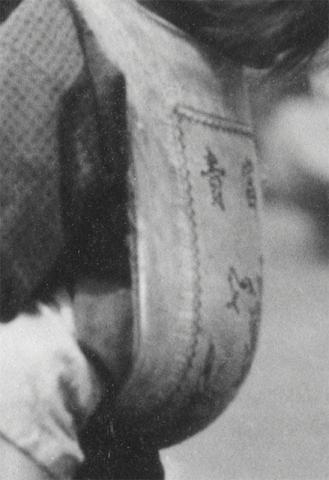 We can get a better idea of the design of the carrier and their decorations in these next two photos. Each shows a carrier that was made in the 1940s.

They're unusual in that they were made to carry western children. Indeed Chris Potter, holding the blue carrier above, was carried in it when he was a young boy!

I say it's unusual, because photos we have of western children from around that time usually show the child in a pram.

But of course the early 1940s in Hong Kong were anything but usual, with Hong Kong occupied by the Japanese, and most of the western families interned in Stanley Camp. There the usefulness of the Chinese baby carrier, plus the fact it didn't need a lot of resources to make, overcame any prejudices the internees may have felt about wearing them.

Here's a sketch drawn in Stanley Camp showing Chris in his carrier, being carried by his mother.

After the end of the war, the internees returned to their prams, but the carriers remained as popular as ever with local mothers. Andrew Suddaby caught two travelling in convoy in the late 1950s.

There's only room for one child in the carrier, so how did the mother manage if she had two babies born in close succession? If they were her first two children, that must have been quite a headache. But families were larger then, so before long there would be an older brother or sister who could take over carrying the young child. Andrew's photos have a couple of examples:

The carriers were still popular in the 1960s and 70s, when Harry took these photos:

This type of cloth carrier is much less popular today, so we don't see them as often. And I've tried to remember if I've ever seen a child wearing one to carry another child, but I don't think I have. Although that style of carrier has gone out of fashion in Hong Kong, the idea of carrying a child close to the body has become more popular in overseas markets. You'll find modern carriers, with high-tech materials and ergonomic claims, in all the baby goods shops.

When each of our daughters were young, I carried them around strapped to my chest in a modern carrier made by Baby Bjorn. A bit sweaty in the Hong Kong summer, but a lot more convenient than trying to navigate a pram or stroller through the crowded streets.

We'll finish with photos of two carriers that deserve an award. First the award for most ornately decorated:

And finally the award for the person most in need of a handkerchief: 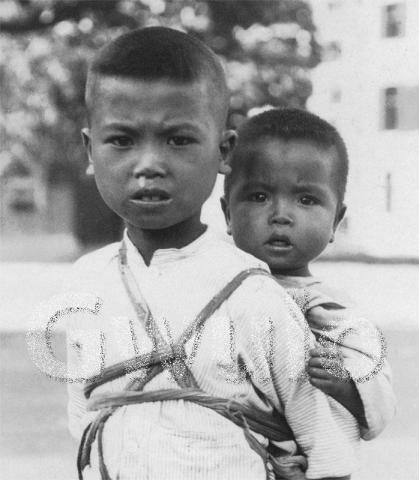 If you've got any memories of carrying or being carried in one of these, or any good photos showing the carriers, please let us know in the comments below.

PS The Chinese name for this type of carrier is 孭带, which in Cantonese sounds something like 'mair dai'. 'mair' means to carry something on your shoulders, and 'dai' is the word for a belt.

The stitching of the second photo

The stitching of the zoomed-in photo reads "abundance".  It must the hope of all mothers in old Hong Kong.

Chinese baby carrier in Chinese should be 孭帶

The Chinese baby carrier in Chinese should be 孭帶. not 背帶！
孭 means carrying on shoulders!

Hi Winnie, thanks for the correction.  I could not find 孭 using Google translation, but found this site - https://en.wiktionary.org/wiki/%E5%AD%AD which pronounces it "me", similar to that (more closer to mer in Cantonese) we used in my 1950s in HK.  Regards, Peter

These can still be purchased (new) in the Yau Ma Tei street market - I bought one there last year for my little one, for about HK$80. It is embroidered with the 'Double Happiness' characters.

Thanks to Winnie for the correction - I've updated the text above. Thanks also for the comments about the embroidery, and their continued availablility.

I asked my sister Carolyn if

I asked my sister Carolyn if she knew anything about this in our family. She is six years and two months older than me, and was born in 1926. Probably in my birth year that started in late Sept. 1932, she carried me in one! Our parents did not let her do it very much. Here is part of her note:

"Yes, I had a meh dai (in Yeung Kong dialect) for my big doll, Perika, which was almost as big as I was when I received her as a present from our parents when I was 3 or 4.  I think I carried you around a little bit, but you were a big baby and I don't think our parents really trusted me not to do something stupid.  Mother never used one.  I think I remember they thought it might injure your neck."

Carolyn is 91 now and has noticed that fact, but is doing marvelously for her age. My brother is only 90 and ditto. I have to myself smile when remembering so many infants so fast asleep with their heads almost straight down connected to upright bodies by bent necks. Wishing I were that flexible.

My mother-in-law calls these "Bei dai" which is 背帶. She was still using one to carry my daughter on her back (whilst cooking!!) well into her 70s. Actually, she is a Hakka lady and the pronunciation of 背 sounds more like "bee".

Within the current stock of

Within the current stock of photos hosted/linked on Gwulo, there should be lots of such baby carriers.  Here is one such photo from 1940: 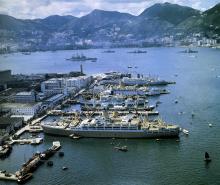