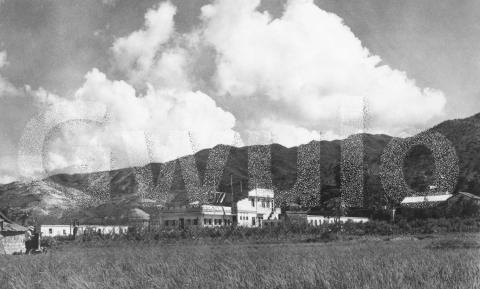 When: This comes from the same set as the recent photo of the YMCA and the Peninsula Hotel in TST, and should be taken around the same time in the 1950s. There's a personal connection between the two photos, which we'll look at in the "Who:" below.

What: Over at the right of the photo, there looks to be a "San Miguel" sign on the end of the building. Possibly a pub? 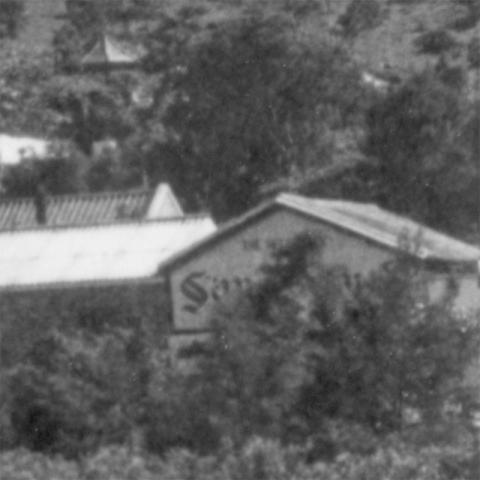 In the centre is a more substantial building, the J E Joseph Hall: 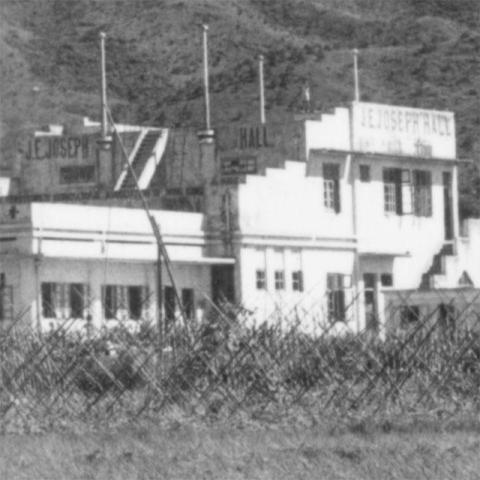 Do you remember either of them?

Where: The photo was sold to tourists with the title "A suburb view in Hong Kong", but according to the 1938 report for the New Territories [1] the location is somewhere in Fanling:

In January H.E. the Governor opened Joseph Hall, the fine new building at Fan Ling presented to the New Territories Agricultural Association through the generosity of Mr J. E. Joseph.

Can anyone pinpoint where the hall stood on a modern map?

Who: The Hall is named after Joseph Edgar Joseph [2], and he's the connection with the previous photo of the YMCA and the Peninsula in TST: 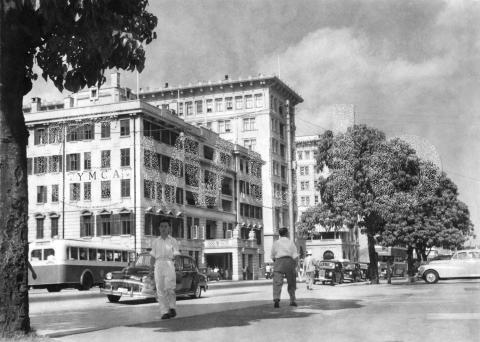 If you had to associate a name with the TST photo, it would be Kadoorie. Not only are they the family behind the Peninsula, they were also one of the main donors towards the cost of building the YMCA. The Kadoorie and Joseph families share many links.

Looking back through the Jurors Lists, we can see they worked together. J E Joseph first appears in the list for 1905 [3], working as an assistant at Benjamin, Kelly & Potts. The "Kelly" in the company name was an alias used by the Kadoorie family, and so in that same list we find Eleazer (aka "Elly") Silas Kadoorie, working there as a broker.

The families likely first met through the Jewish community. They were certainly both prominent members of the Ohel Leah Synagogue [4] up on Robinson Road. The membership lists for the synagogue [5] show them swapping roles between member, committee and trustee over the years.

They were also both connected with the nearby Jewish Recreation Club [6]. The first clubhouse was a gift from the Kadoorie family, opening in 1909. It was destroyed during the second world war, but the Club re-opened in a building that had been donated by J E Joseph as a house for the synagogue's Hazzan [7] [8].

The last connection is their generosity to various charities over the years. As one example, they both supported Hong Kong's farming community, and created funds that are still in operation today. The Kadoorie Agricultural Aid Loan Fund [9] grants loans to "to individual farmers, pond fish operators and mariculturists", while the J.E. Joseph Trust Fund [10] grants to "farmers' co-operative societies and individual farmers".

Though they shared many similarities, one big difference is that while the Kadoorie name is still well known, few remember J E Joseph. The likely explanation is given in Joseph's obituary: it doesn't list any children to carry on his name and reputation [11].

Tired to look up New Territories Agricultural Association but found it had been desolved back in 3rd July 1986.  I guess if we could dig out its former address(es) in Fanling maybe we may find something.

The philanthropy of Mr. Joseph was quite extensive. Joseph Hall was opened on 9 January 1938 and located near the Fanling Railway Station. Perhaps an old map of Fanling would be able to assist.

Since whoever left a link here (http://www.hkmaps.hk/details.html) with the Hong Kong maps some weeks back, the old maps have become my new toy.

The 1957 map (http://www.hkmaps.hk/map_1957.html) shows some extra buildings, and it claims to use information from 1954 aerial photographs.

Shame no map gives any names of individual buildings.

Re: matching the ridge skyline

The ridge shown in the photo could be used.  That leave just a few locations for matching.  I wonder if the shades\patches behind the watermark G could help.  If they are rock faces we might be able to match them.

I began to wonder if the patches is Wo Hap Shek Cemetery.

Here's the area of the photo behind the watermark G:

I'd thought the hillside was terraced for farming, but if you zoom in on the area at bottom-left, it looks like gravestones on narrow terraces. So I think Thomas is right that we're looking towards the cemetery.

Re: Line of sight

Ah, that would put the location of the Hall on a line approximatelyNNE toward present day Fanling somewhere close to the Railway Station.  That being the Hall appeared to be on a piece of relatively flat land.  Unfortunately the area had been heavily redeveloped since the 1970's.

May have to look for aeral photo of the area.  I'll fish out the 1963 book tonight and see if there are any clues.

I agree with T.  There is

I agree with T.  There is also one thing about this picture that is a little mysterious, and it concerns a faint horizontal straight dark side (or wall) pointing at the 2 o'clock direction from below "u" in the watermark all the way to "o", running at the back of the Hall to the San Mig house.  What is that?  some sort of outer wall of a building?  a walled-village (圍村)? a passing train even?

There is a Fanling page in the Hong Kong in Old Times - A Collectin of Aerial Photos Taken in 1964.  The scan below was taken from page 130.

No concrete evidence but I have highlighted a building in red.   The outline fairly match the long side shown in the photo above.  It's just off the railway.

Unable to determine.  We need a Fanline resident old enough to verify.  Hope Lawrence is reading this.

It's right next to the Better 'Ole in Fanling. If you look at the map on Gwulo's Better Ole page (http://gwulo.com/node/11611) you'll see that it matches the very helpful aerial photo in the last post.

Re: Location of Joseph Hall

Pieces seemed to be falling into places:

Shall we use that at the location of the Joseph Hall until otherwise disproved?

Thanks to everyone for your help. I've made a Place for the Hall at http://gwulo.com/node/36628

As you expected David even at the high resolution you sent me it has proved very difficult to determine the name of the pub, even working at pixel level.  However, I can say that the first word is 'THE'.  I am also reasonably certain that the second word does not start with a 'B' (for Better Ole), it would appear to most likely be 'W' and the second letter would appear to be 'I'.  After that the tree branch gets in the way.   We need an ex Fanling drinker!

Re: The San Miguel Ad

The line above San Miguel may or not have anything to do with the name of the pub or restaurant.  It could be part of the advertisement itself.  If only we could find another exterior wall advertisement of the same decade for comparison...... 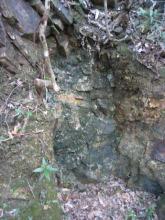