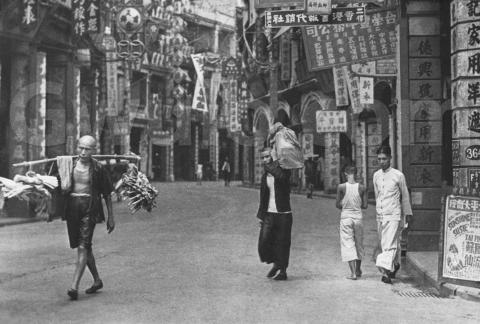 Where: The title of the photo is "Queen's Road". They don't say if it is the East, West, or Central section, so that's a lot of road to think about. Fortunately, one of Queen's Road's quirks is its twists and turns, which helps identify the different sections.

Looking at the shape of the road in the photo above, and the curve of the curb stones in the bottom right corner, I believe this is a photo of Queen's Road Central looking west from the junction with Bonham Strand. Compare it with this view taken earlier in the week, and see if you agree: 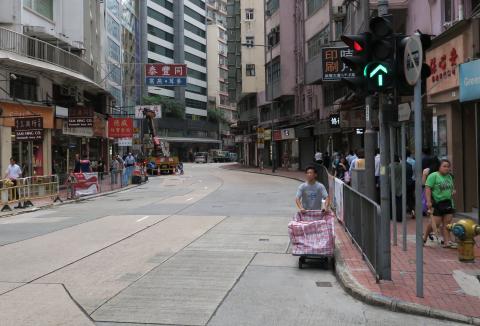 When: The board in the bottom right corner is advertising "Sunshine Susie", showing at the Tai Ping Theatre. 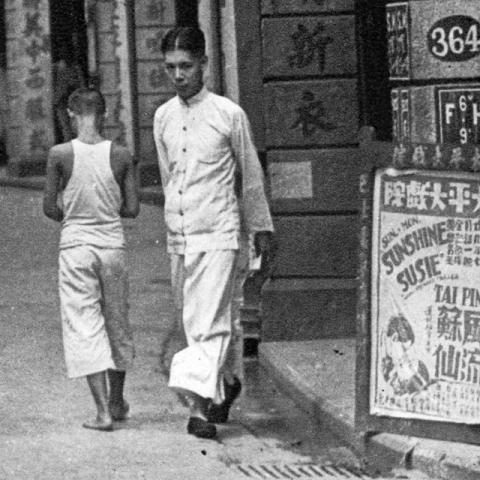 The film was a British musical, released in 1931 [1], and dating this photo to the early 1930s. The sign also confirms we're out on the western side of Central, as Tai Ping Theatre was in Shek Tong Tsui [2].

Who: Not many people to see. I'd expect this part of town to be busier, so maybe the photographer has made an early start. 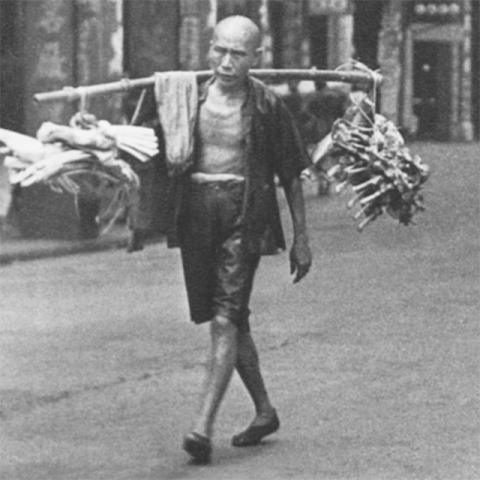 Any guesses what's dangling off the back of his shoulder pole? It reminds me of a rack of ribs...

What: Only the foreground is in focus, so there isn't much to say about this photo. A couple of signs on the pillar caught my eye though:

The "FH" sign that shows a Fire Hydrant is near, and indeed the modern view above shows there is a fire hydrant on that corner today.

Above it is the number 364 in an oval. Any ideas what it represents?

Was it a number to identify the Fire Hydrant? Today the fire hydrant on this corner is number 151, but it's possible the hydrant has been re-numbered. 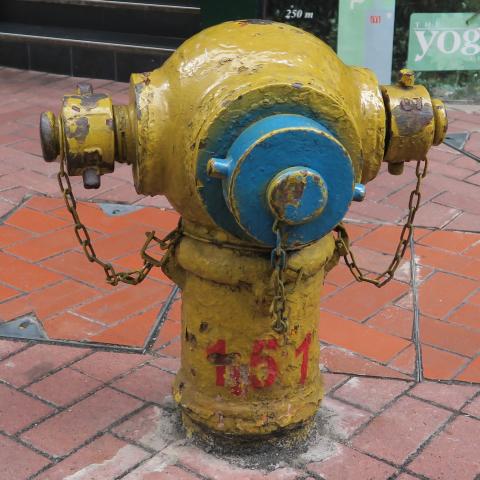 Any other ideas what that number might be for?

Trivia: Why is this fire hydrant painted yellow, instead of the standard red colour?

And the blue coloured cap? That shows that this fire hydrant is out of service, telling firemen not to bother trying to connect a hose to it. [4]

I believe the photo shows where I lived and grew up. The extreme left shop shows reflections of the characters "Po Kwong" (寳光 meaning precious light). It was a jewellery shop in my childhood days, but the Chinese characters in the reflections suggests it was a watch shop. My home should be the one to the right (west), at 210, Queen's Road Central. The shop should be Tin Fook (天福), also a jewellery shop. In those days, this part of Q's Rd C was lined by such shops. The shop further to the right is Tai Hing (大興), another Jewellery shop. There were some changes in the shop where I lived, first to Chan Kwong Kee (陳廣記), then to Tin Yuen (天元), my landlord.  All were jewellery shops. The latter and Po Kwong made a fortune and moved further east of Q's Rd C., quite a distance east of the old Central Market. Both shops are still next to each other and are still doing the same business.

The rows of shops opposite are beyond my recognition. There is a short section of Steps linking Q's Rd C to Jervois street, opposite to a few houses to the right of where I lived. But it was blocked from the cameraman's view. 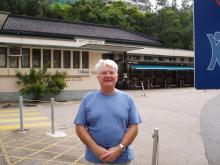