I'm searching for old photos (or sketches, paintings, etc) to illustrate the history of the Central Police Station (CPS) site (click here for details of the project). In this update I'll look at what punishments were given to convicted criminals, and the prison buildings on the CPS site.

If you'd been caught by the police and found guilty by the magistrate, you coud expect to receive some combination of the following punishments:

(The death penalty, and longer prison sentences could only be handed out by the High Court, not the Magistrates.)

The stocks were used for many years. They were a popular subject for postcards, so we have several examples showing criminals in the stocks, eg: 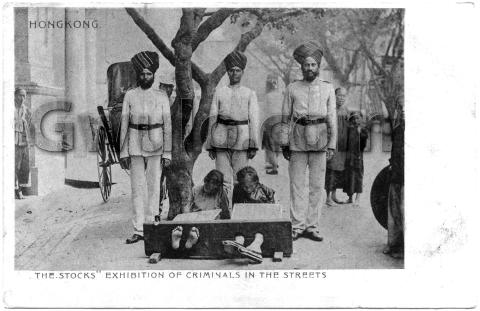 You can see more photos of the stocks, and a similar Chinese punishment known as the cangue, in the first project update. I'm still interested to hear from you if you know of any other photos / sketches showing prisoners in the stocks or cangue in Hong Kong. I'm especially interested to see any photographs that show clear detail, and any views that are older than the ones we already have.

The stocks were uncomfortable, but more serious crimes received a much more painful punishment:

Q8. Have you seen any photos of the flogging post?

We've seen one photo that appeared in the Asia Society's "Picturing Hong Kong" exhibition, and is shown on page 94 of the exhibition catalogue [1]. Are there any others out there?

This report from 1843 calls it a "whipping stand", and places it "at the west end of the Upper Bazaar":

The punishments inflicted on the Chinese are flogging, hard labour, and confinement. All, or nearly all, are flogged, the number of blows varying from 20 to 100. Few only receive a hundred, many have 40 or 50, the latter number is most common. these are given in public. The criminal, with a label on his back, written in Chinese characters, is conducted from the prison to the whipping stand at the west end of the Upper Bazaar, and there undergoes the sentence of the law, and returns again to prison.[2]

An 1842 map [3] shows the Upper Bazaar as the area of land immediately west of the CPS site, and stretching downhill as far as Queen's Road.

However, reports from the 1870s, closer to when the photo mentioned above was taken, mention a different location:

The public flogging of eighteen prisoners will take place at the whipping post, this day, at 3:30 p.m. Hongkong Daily Press, 23 January 1872

A public flogging of four Chinese prisoners has taken place at the Master's flogging post, opposite the old Harbour-office. The London and China Telegraph: 1873 [4]

As far as can be ascertained, the whipping post was near the Harbourmaster's Office, located half-way up Wyndham Street, near the present On Lan Street. [5]

The photo shows an area of flat ground though, so that doesn't sound right. Perhaps it was opposite a later version of the Harbour Office [6], which stood in Sheung Wan, roughly where the Western Telephone Exchange is today. If anyone knows more, please let us know in the comments below.

So far we've looked at flogging that was prescribed by a Magistrate as punishment for a crime. Flogging was also used as a disciplinary measure inside prison. The stand that was used has been preserved, and is on display at the Correctional Services Department's (CSD's) Museum [7]: 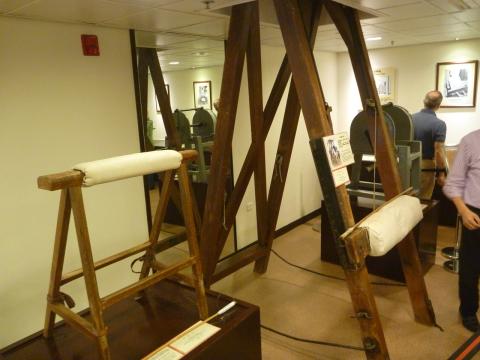 Here's the 1845 map we looked at last time, showing the area where the CPS site is today. On this map, the Magistracy is roughly in the middle of the site, and there are two buildings marked "Jail" to the north: 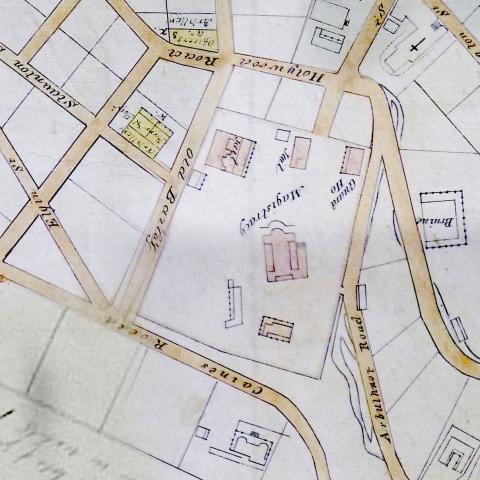 Within a year or so, a new Magistracy was built facing Arbuthnot Road, and the old Magistracy building became the Debtor's Prison. Later the police built across the north of the site, so we end up with today's layout: Prison across the southern, uphill half of the site; Police Station downhill on the northern half, and the Magistracy running along the eastern edge.

Q14. Do you have any photos of the prison buildings / prison officers / prisoners?

Sources I know of include the CSD's museum, and also the collection of photos, maps and information in the "Victoria Prison" section of the Hong Kong Memory website [10]. If you know of any more, please let me know in the comments below. The older the better, and interior shots are especially rare.

We've shown a few before in the first update. They are from the UKNA (UK National Archive), and are relatively well known:

But a big thank you to Christopher Munn for directing me to these three old photos from 1862 (over 150 years old!), held in the UKNA collection. They are tucked away as an attachment to a letter [8], so I'd never have found them without his help. 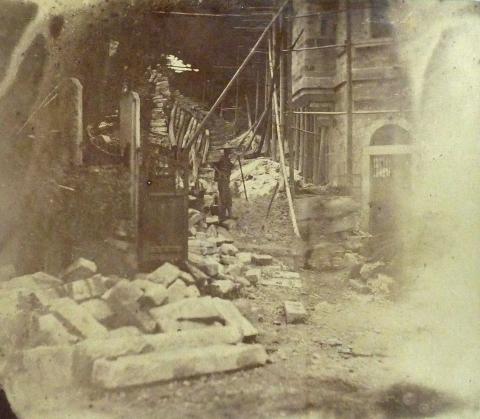 This is the view into Chancery Lane from Arbuthnot Road. Chancery Lane is the southern boundary of Victoria Prison. The little building on the right, now called Bauhinia House, is still standing today:

Next is the view into Chancery Lane from the opposite end, Old Bailey Street:

And finally the view up Old Bailey Street, with the prison on the left (the arrow points to Chancery Lane). 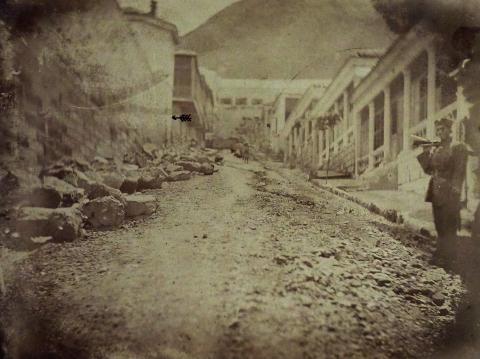 The rocks in this photo give a clue to what "hard labour" entailed. In the letter that went with the photos, we read:

To prove that convicts can work upon the Old Bailey Street, I call Your Grace's attention to View No. 1 ((ie this photo)). The police man there seen, was a guard over convicts employed carrying the boulders into the Gaol. The gaol has been more than doubled in size, since which expansion the stock of stones intended for convicts to break has been placed on one side of the Old Bailey, choking up the gutter and forcing the water during heavy rains across the street. The Photographs were taken a few weeks ago, since when there has been some little improvement.

Apart from breaking stones, other forms of hard labour included walking on a treadmill, or turning a crank like this: 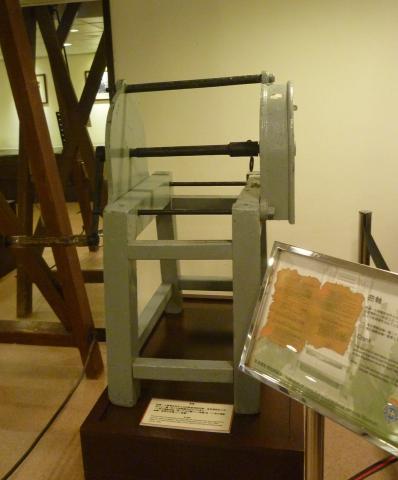 You might think that doesn't sound too bad, but it had stiff resistance, and a prisoner would need to turn it 12,500 times in one day. A report from 1896 [9] said that some prisoners would rather receive a flogging than turn the crank!

I've previously asked for help finding photos of senior policemen, magistrates and judges. Thanks to Doug, who found this picture of R E Lindsell [11], in a 1940 issue of the Hongkong Telegraph: 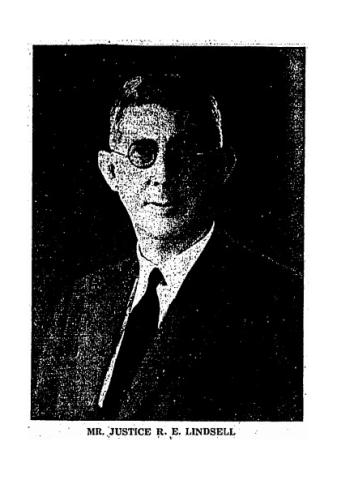 Lindsell was a Hong Kong cadet, and took on many different roles in the courts over the years.

Thanks also to Roy Delbyck for showing a couple of volumes of the China Punch he has in his collection. As the following examples show, the police and legal professions were frequent targets for the Chuna Punch's cartoonists.

In the first one from 1867, we have the acting Superintendent of Police (A.S.O.P.) giving some very politically incorrect advice to a new Indian policeman: 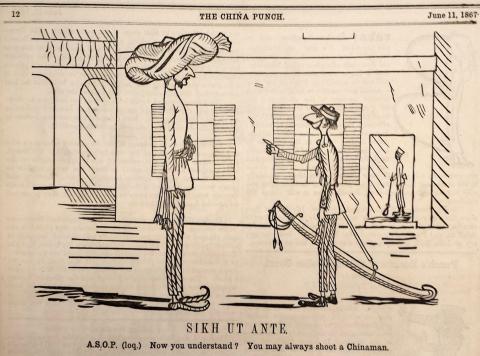 The A.S.O.P. at the time was W M Deane [12]. He must have caught the cartoonist's eye, as he appears in another issue later that month: 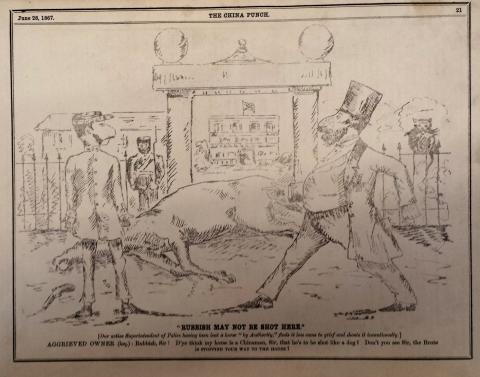 Several more policemen appear over the next year: 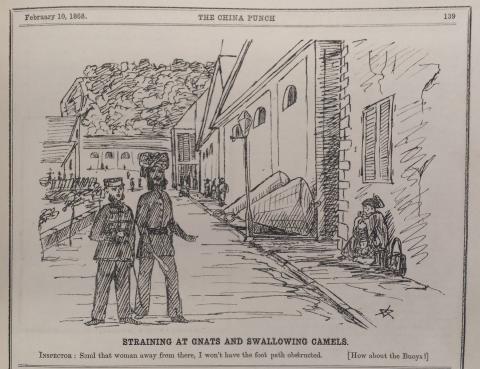 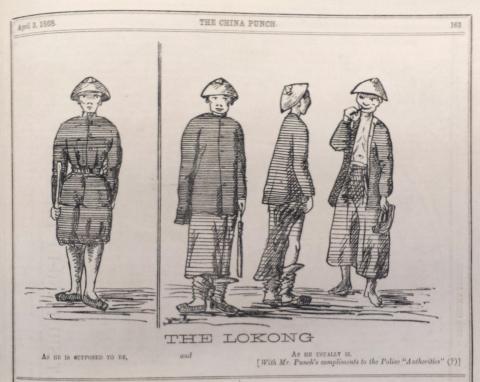 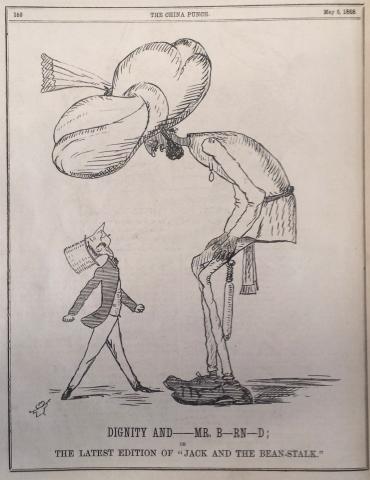 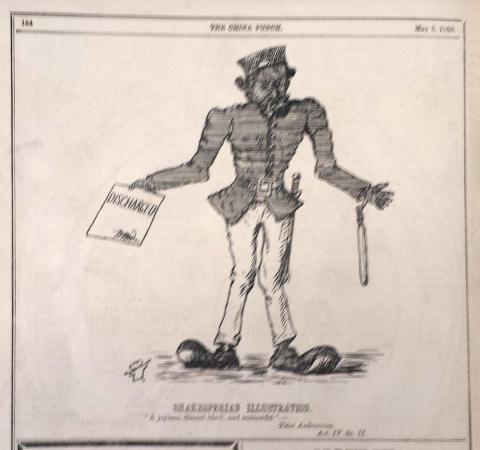 The second volume is from 1873, and this time the courts receive the cartoonist's attention.

"THE MAJESTY OF BRITISH JUSTICE VINDICATED. After the conclusion of the case, the accused Lo Apiu, returned to the Court, and through Mr D. R. Caldwell [13], thanked the Magistrate for the fair trial he had had, and expressed his obligations to the administration of British law." 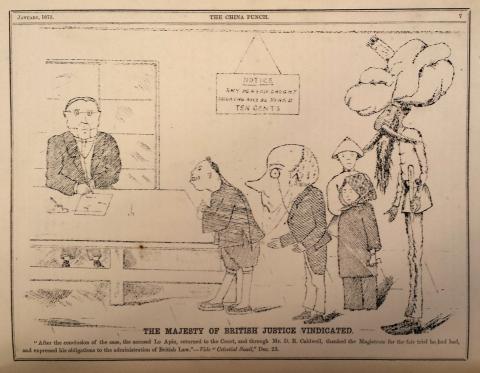 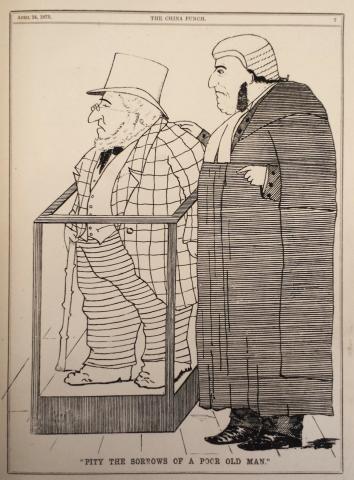 I'm not sure who the man in the witness stand is. Could it be John Smale [16], the Chief Justice? I believe the man on the right is Julian Pauncefote [17], Hong Kong's Attorney-General from 1865-73. Their names appear - not very heavily disguised - in this spoof of a Legislative Council proceedings: 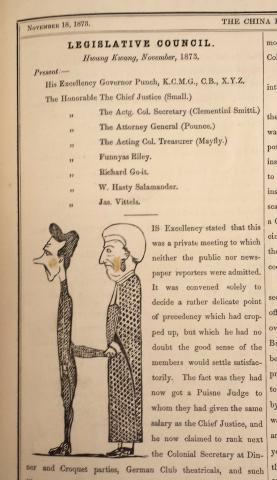 I think that's Pauncefote again on the right - there's a good photo of him on Wikipedia for comparison [18]: 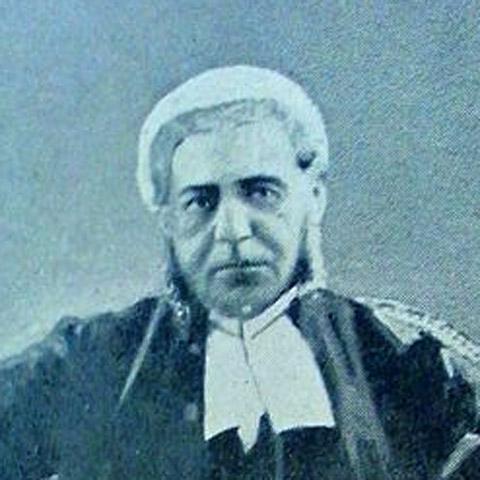 Smale and Pauncefote appear again in the final cartoon, quite literally in the doghouse: 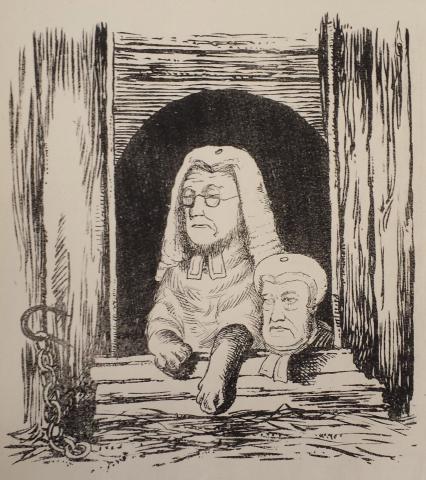 Thanks to everyone who has helped. I'm sure there are still plenty more illustrations out there waiting to be found, so please let me know if you think of any.

The 1946 Hong Kong Annual Report (viewable in HKU's Special Collections) mentions the damage to the prisons during the war:

Hong Kong formerly possessed three prisons, but from the re-occupation of the Colony until the middle of 1946 it was possible to bring into use only the main gaol, Stanley Prison. This prison is situated in rural surroundings on Stanley Peninsula in the South-Eastern area of Hong Kong Island. It was in the grounds of this prison and the adjacent area that Alied civilian internees were confined during the Japanese occupation. Built in 1937, it is architecturally a fine prison and admirably suited for housing convicts, old offnders and hardened criminals. But the lack, during the early days of the re-occupation, of any facilities for segregation was a serious disadvantage. The former female prison, which was situated on the mainland in the outskirts of Kowloon, suffered very heavy damage as a result of the war and could not be repaired and brought into use in 1946. It was therefore necessary as a temporary measure to accommodate women prioners in Stanley. They were segregated as far as possible and were housed at the end of the year in the old printing shop building round which a screening wall was built.

Victoria Remand Prison, which is situated in the urban area of Hong Kong, had suffered considerable damage during the war. Its situation is convenient for the Courts,and cell accommodation for 150 remand prisoners was repaired and brought into use during 1946. Young offenders on remand are also housed in this prison and are segregated as far as possible. The building is far from satisfactory, being the remains of the old Victoria Gaol, the Colony's first prison and a dungeon-like relic of Victorian prison design. The oldest part of this prison was destroyed by aerial bombardment during the war.

There is no mention of a case in the reports from the Magistrate's Court in the Hong Kong Daily Press involving Lo Apiu in January 1873. There is an intriguing mention to a Lo Apiu as a complainant in a consipracy case before Smale CJ with Julian Pauncefote as AG prosecuting.  (See HKDP 11 and 20 January 1873)

Given the China Punch cartoon is from January 1873, the Magistrate's Court case most likely was in December 1872.  Unfortunately MMIS has no newspapers online between July and December 1872.

Thanks Doug, that narrows it down. Then am I right to think the magistrate in the cartoon will be one of Charles May or F. W. Mitchell, or have I missed any other possible characters?

David, It is most likely May or Mitchell.  They were both sitting in January 1873 (and I presume December 1872).