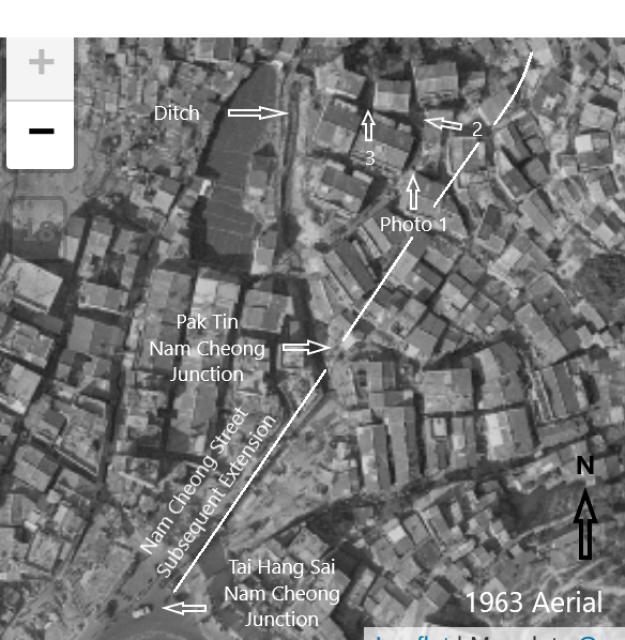 Locations of photos taken by Harrison Forman during his visit to Shek Kip Mei shanty town in 1956, marked on an aerial photo dated 1963.  For reference, the location of the subsequent extension of Cheung Sha Wan Road has been added.  During this seven-year period, physical changes to the area are expected, such what are shown in Forman's photos may not be the same, or no longer there, in the aerial photo.  There is another candidate site a short distance to the north, but after looking at the pros and cons, I have decided on the current location markers.  Corrections are welcome.

Notice the difference between SKM-2 and SKM-3, one moment the laundary was on the line, and next they were not there anymore, or was it the reverse?  One explanation is that Foreman took one photo, then on his return trip took the other photo.  Or he spent some time with his new friends between the two photos.

Bottom:  Ground view of 4 (on higher ground) and 5

During the 1940-50s, the Cheong Sha Wan Road - Tai Po Road junction was the main route to the Shek Kip Mei shanty town.  Using this 1947 air photo (above), I believe I have identified the spot where Harrison Foreman took Photo s 4 and 5 when he toured the area in 1956.  While some changes have occurred during this 9-year period, there are several features that helped my search.   It appears to me that the tall building on the right edge of the photo was built after 1947, as the photo does not show a convincingly tall building shadow.  Oh, now I remember walking down to that small ditch's holding pond, not a tourist attraction, still, corrections are welcome.

On the 1947 aerial photo, I have also marked the spot for Photo/Camera 4,  (children standing next to the small ditch).  It was at the first cross land on the high ground.

The 1949 aerial below shows the spot, between the two red dots, where Foreman was standing when he took this photo.  This short laneway was no longer there in the 1963 aerial photo.

Thank you tkjho.  I wonder if this gate was on the north side of the Nam Cheong - Tai Po junction.  The three tiny dots on one 1947 aerial map seems to suggest it was.  If my memory is correct, I walked past it during the mid-1950s; and the hill would be the northwest side of Woh Chai Shan.  Once past the gate, there was a small passage between shops to the right, and a wider path to the left.  Regards,  Peter