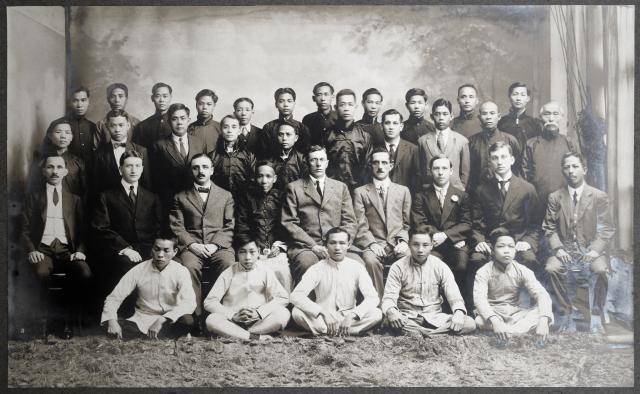 Charles Gesner van der Voort had started his career in Rotterdam, at Holland-China Trading Company (HCHC). In 1938, he went to Shanghai for the firm. The Japanese interned him, and most other Dutch nationals, from 1943-45. In camp, he met his wife Nancy and they married after the war. After a leave in The Netherlands, they returned to the Orient, where Charles continued to work for HCHC in Hong Kong.

Twenty years before Charles started, in 1918, a photo album was made of the Hong Kong office and office staff.

Fortunately, unlike several other HCHC group portraits, there are names written underneath the photograph, although not the names of the Chinese staff members. If you recognise someone, please let me know.

Cecilio Paulo Pintos is on Hong Kong Juror's lists, from 1899 (working for Hotz s'Jacob & Co, one of the companies which merged into Holland-China Trading Company in 1903) to 1930.
https://gwulo.com/jurors-list-1899

How about identifying as many of those people  in your  pictures that you can..... instead of merely posting them ?

Some time ago you asked on this site about the identiy of one portrait and I obliged with a reply  ..... for which you  thanked  me .

My point is , .....why not research these pictures before just clicking " copy  and  paste "  and adding a  personal credit?

This group photo has a prominent member of the Holland China Trading Company ( the man I identified for you....Tong Lai Chuen J.P. ) yet you don't bother to identify him now . Some of the others in the front row could probably be identified with a little research..... Yes this is a challenge....but instead of leaving it to others ..... please try doing this yourself before posting .....

Many thanks for your comment. I did think of identification, just thought readers would go to Flickr to see more detail on the photo. I have now added the Flickr comments in Gwulo as well. Identifying more people: yes please! If you or someone else can help with that, like you did before in a great way, it is much appreciated. 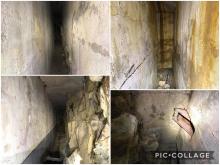