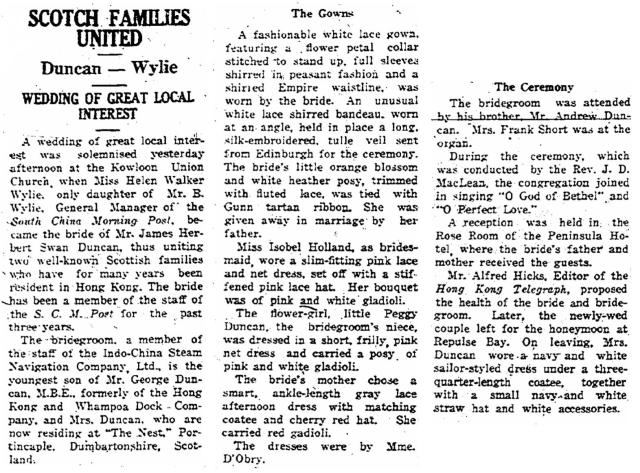 A wedding of great local interest was solemnised yesterday afternoon at the Kowloon Union Church, when Miss Helen Walker Wylie, only daughter of Mr. B. Wylie, General Manager of the South China Morning Post, became the bride of Mr. James Herbert Swan Duncan, thus uniting two well-known Scottish families who have for many years been resident in Hong Kong. The bride has been a member of the staff of the S. C. M. Post for the past three years.

The bridegroom, a member of the staff of the Indo-China Steam Navigation Company, Ltd., is the youngest son of Mr. George Duncan, formerly of the Hong Kong and Whampoa Dock Company, and Mrs. Duncan, who are now residing at “The Nest," Por-tincaple, Dumbartonshire, Scotland.

A fashionable white lace gown, featuring a flower petal collar stitched to stand up, full sleeves shirred in peasant fashion and a shined Empire waistline, was worn by the bride. An unusual white lace shirred bandeau, worn at an angle, held in place a long, silk-embroidered, tulle veil sent from Edinburgh for the ceremony. The bride’s little orange blossom and white heather posy, trimmed with fluted lace, was tied with Gunn tartan ribbon. She was given away in marriage by her father.

Miss Isobel Holland, as bridesmaid, wore a slim-fitting pink lace and net dress, set off with a stiffened pink lace hat. Her bouquet was of pink and white gladioli.

The flower-girl, little Peggy Duncan, the bridegroom’s niece, was dressed in a short, frilly pink net dress and carried a posy of pink and white gladioli.

The dresses were by Mme. D’Obry.

The bridegroom was attended by his brother, Mr Andrew Duncan. Mrs. Frank Short was at the organ.

During the ceremony, which was conducted by the Rev. J. D. MacLean, the congregation joined In singing "O God of Bethel", and "O Perfect Love."

A reception was held in the Rose Room of the Peninsula Hotel, where the bride’s father and mother received the guests.

Mr. Alfred Hicks, Editor of the Hong Kong Telegraph, proposed the health of the bride and bridegroom. Later, the newly-wed couple left for the honeymoon at Repulse Bay. On leaving, Mrs. Duncan wore a navy and white sailor-styled dress under a three-quarter-length coatee, together with a small navy-and white straw hat and white accessories. 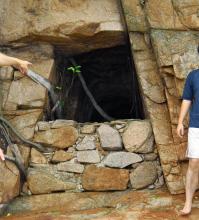