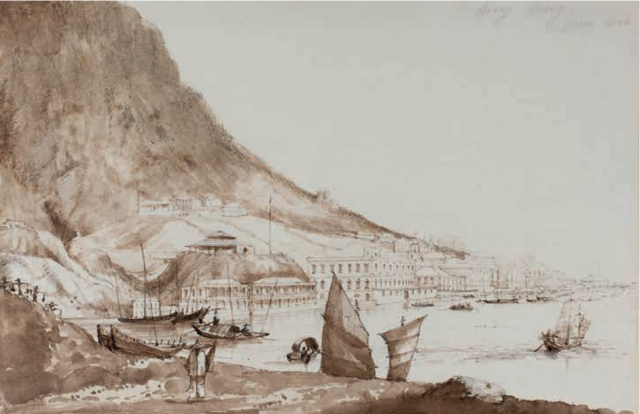 From left to right along the waterfront is:

On Peddar hill above is the Harbourmasters office. Above that is Victoria Gaol buildings.

The first Catholic Cathedral can be seen as well, interestingly it only sems to have one tower rather than the two it had later after the 1860 rebuild.

Walford Bellairs entered the Royal Naval College in 1809, and the Royal Navy three years later, serving on the ship Asia; he was commissioned in 1819. He was employed in 1842-1845 as Admiralty Agent in the Packet Service, on the West Indies route; later he served in the same capacity in the Far East, aboard the P. & O.’s first mail steamer to operate beyond India, the Lady Mary Wood. Bellairs sailed from Point de Galle, Ceylon (Sri Lanka) via Penang to Hong Kong, arriving on 21 February 1846 and setting off on the return journey a week later. He made several voyages between these ports, on the Lady Mary Wood and (in 1847) the Pekin. Later that year he returned to England, where he died on 11 September 1850

Can we add Post Office to Places. This is an excellent view of it.

Were the Court and the Post Oddice different buildings?

Yes, separate buildings. A good picture of the two can be seen here. The post office building is the one just below the Catholic Cathedral tower.

Hong Kong, boats in a harbor