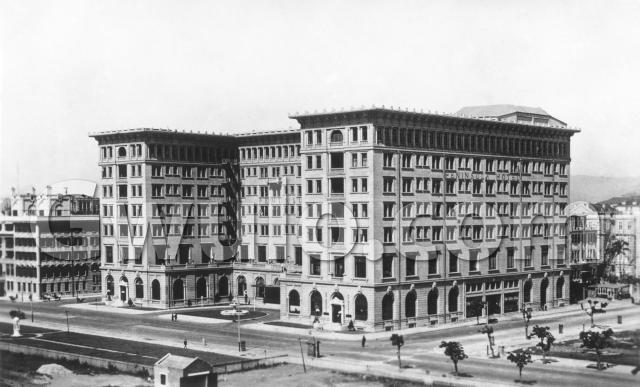 Where: Not a hard one to locate - we're looking across Salisbury Road towards the Peninsula Hotel. What's not so clear is where the photographer took the photo from. He was certainly high up, level with the third or fourth floor of the hotel.

Here's another view of the area, taken from Signal Hill around 1935: 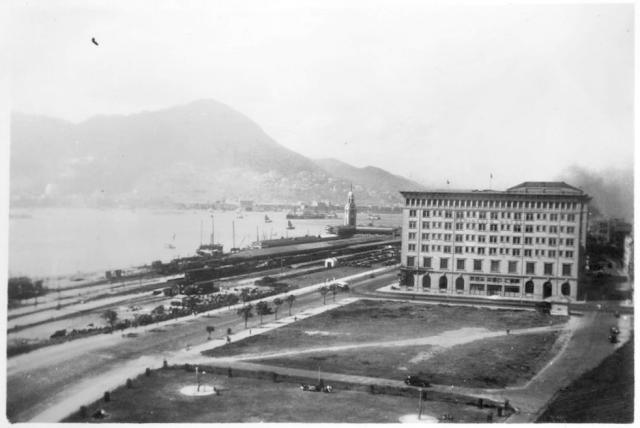 The view from Signal Hill.

There aren't any buildings between the Peninsula and the sea. Did he climb up onto the

roof of the station platforms?

Who: There aren't many people to be seen - certainly very different from TST today. We can see a few people taking a stroll along Salisbury Road, but the busiest area is over to the left: 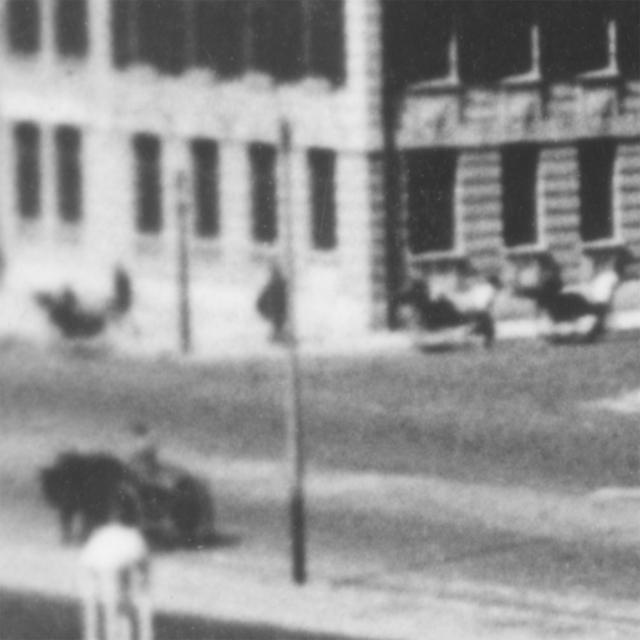 A couple of rickshaws have just turned into Hankow Road, likely carrying passengers from the Star Ferry. Then down in the foregound is a larger vehicle, possibly a horse & cart.

What: The building on the left is the old YMCA: 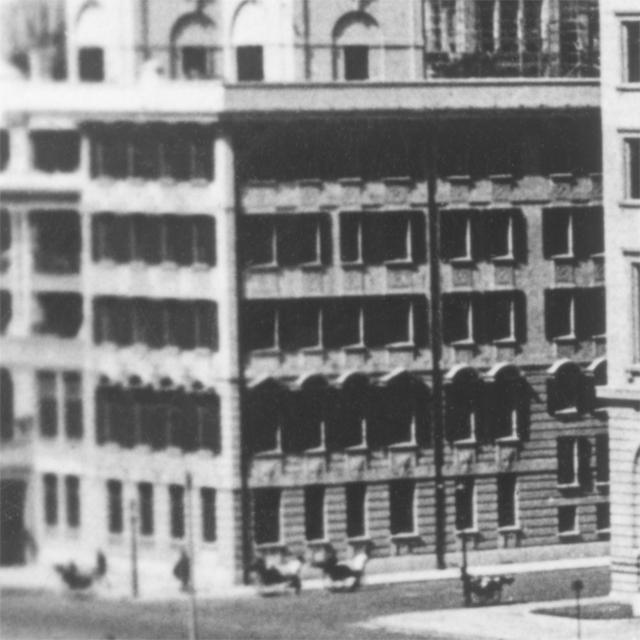 It's since been replaced by a new YMCA at the same location.

The Peninsula is still the same building, but with some major changes. 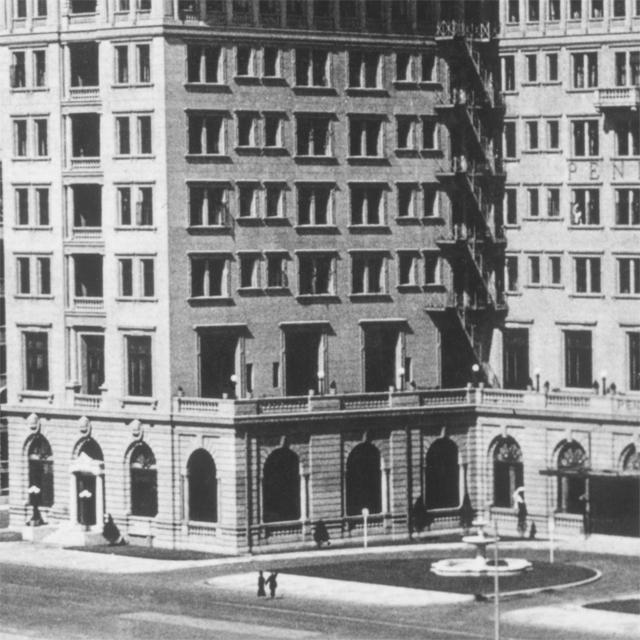 The original fountain was much more modest than today's. There was also more of an open-air feel to the old hotel - a large, open balcony on the first floor, and also more balconies running down the end of each wing.

Across the street from the Peninsula is this: 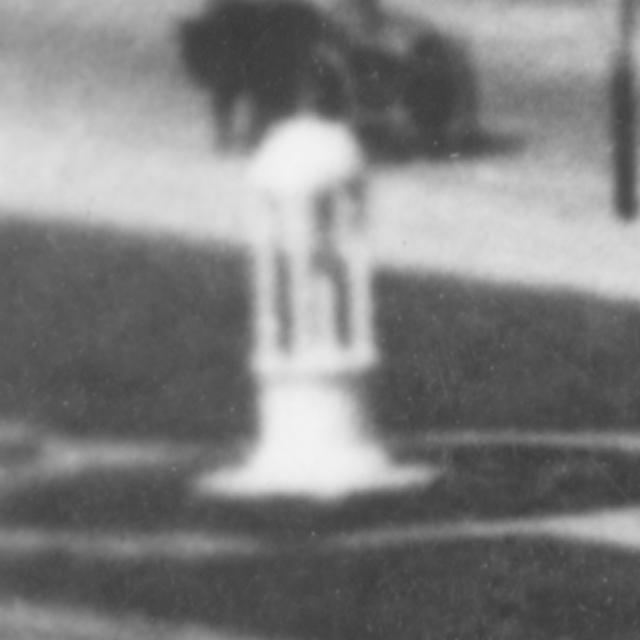 Looking along Nathan Road, there's this structure on the roof of the hotel: 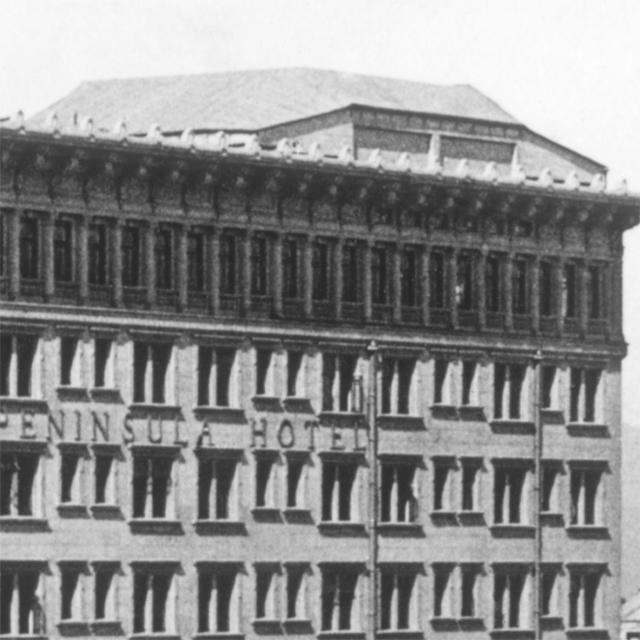 Does anyone know what it is used for? It reminds me of Darth Vader!

Then across Middle Road is a house set back from Nathan Road with what seems an impossible luxury today, its own garden... 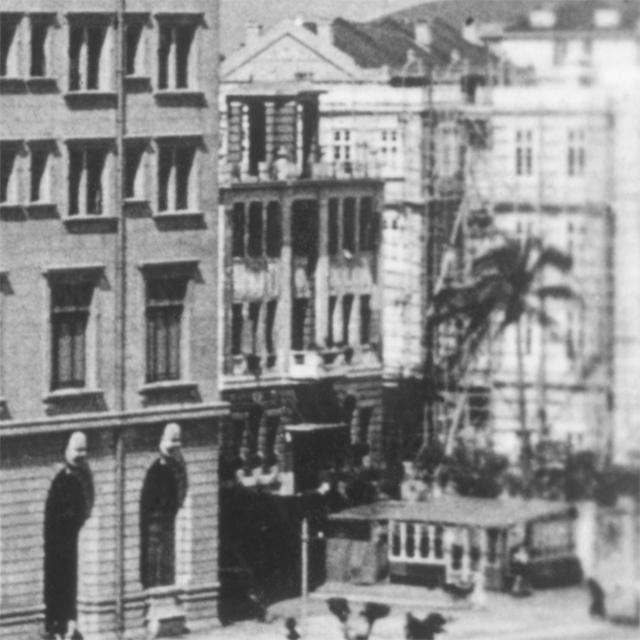 When: This photo is another from the soldier's album of postcards bought in 1945. In 1945, the Peninsula still wore the camouflage paint-job that the Japanese had given it, so this photo must have been taken pre-war.

The building under scaffolding on the far right of the photo might be a better clue. It was a guest-house that changed owners and name many times times: Airlie House, Chardhaven, Baron's Court, <Name unknown during Japanese occupation>, and Star Hotel. I've previously estimated it was finished in 1932 [3], and as it has scaffolding up in this photo, I'll go with that.

I wonder if that is the Pen's Roof Garden for entertainment parties.

Could the photo possibly have been taken from Holt's Wharf/Blue Line Funnel building? (according to a book I have, "A Century of Kowloon Roads and Streets", at p48-49, that building stood on the site of the current New World Centre from c1930-c1970, and looks to be about 4 or 5 storeys high.) However, it may be too far east of where the photo seems to be taken from...
I also wondered what the small building in the foreground could be - a railway worker's hut of some kind? And the other object, much closer to the roadside, that looks like a traffic policeman's stand? (though the road hardly seems busy enough to need one.)

Yes I agree with ElizabethM, this picture surely must been taken from the 4th. or 5th. floor of the Holt's Wharf buildings, seen here in these 1930's and 1960's pictures?:

He may take the photo from

He may take the photo from ocean liner or ship.

Correction. I see the remark about the second picture was indeed taken from Signal Hill in 1935 and agree that the first was snapped from Holt's Wharf.

As for that horse & cart outside the Pen, perhaps an ox and cart instead as the head of the animal is too low to be a horse.

Did they have a rooftop garden? If yes, it could certainly be connected. Looking through the other photos we have, it was still there into the 1970s at least.

I'd decided that Holt's Wharf was too far east, but looking again you're absolutely right. Here's a map of the area in 1924, showing that if you stood at the western end of the Holt's Wharf buildings, you'd be in the right spot to take this photo: 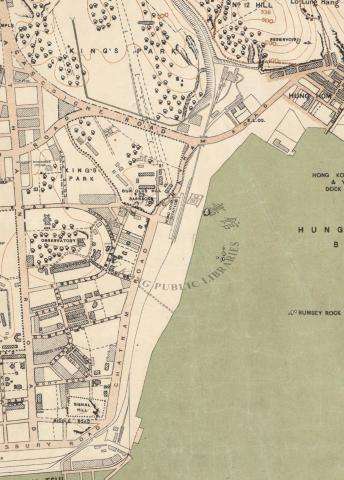 In conversation yesterday, John pointed out another difference, the very obvious fire escape staircase running down the inner corner of the building. Why make them so obvious (and not run them down the back of the building), and where are they now?

One suggestion is the the obvious fire escapes were a deliberate choice, meant to reassure guests. This hotel was completed in 1927, but the previous year the North Wing of the company's Hong Kong Hotel had been destroyed by fire. So fire risks and fire safety would have been on everyone's mind.

Thanks for all the interesting feedback,

I've found a reference to 'The Roof Garden Ball Room' at the Peninsula, dated 1928 - could this be it? It is on an invitation to a Carnival Dinner Dance being held on the opening day of the Hotel on 11 December of that year (I found it on the website http://hongwrong.com/peninsula-hong-kong/). No picture of the ballroom itself, unfortunately, but I can't imagine what else it could be!

Thanks, that must be what it is. Here's another mention, describing Hong Kong in December 1941:

At the colony's most luxurious hotel, the Hong Kong (sic.), the famous Gripps restaurant and ballroom were booked solid until Christmas for dances and parties. Those were the smartest events, but the colony's prosperity could be seen, too, in the fantastic entertainments put on at the Rose Room and Roof Garden at the Peninsula Hotel, and the dances organised at private homes.

I'm pretty certain the photo is taken from Holt's Wharf - see this 1928 (or thereabouts) photo: Holt's Wharf building behind the quay where the soldiers are lining up, with the Pen to the left. 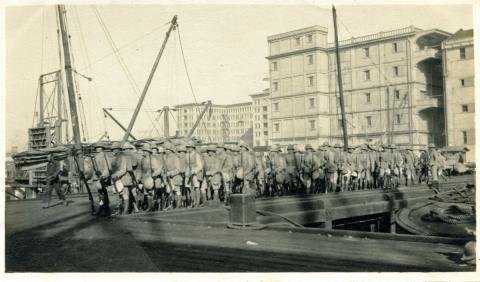 I'd say this photo does a pretty good job of confirming the theory! A great find.

David's original post mentioned two unidentified structures, namely the possible drinking fountain on the south side of Salisbury Road, and the building on the Hotel roof. Local newspaper coverage of the opening of the Hotel contains some relevant information, but doesn't tell us the function of either.

Firstly the suspected drinking fountain. The photo shows it stood in the middle of what was probably a lawn running the width of the hotel. A narrow path encircled the structure with offshoots running to, and parallel to, the road. A wooden fence bordered the lawn. This patch of land was mentioned in the HK Telegraph of 8th December 1928;

"On approaching the Hotel, one notices that the portion of ground opposite, between Salisbury Road and the railway, is being laid out as an ornamental garden..."

The China Mail of 12th December 1928 was rather more impressed;

"...opposite the building, the strip of ground between Salisbury Road and the railway is being laid out as an ornamental garden, which will be a beauty spot of Kowloon when completed."

So the suspected drinking fountain was the centrepiece of an ornamental garden. Comparing its height with the pedestrian on the nearby pavement suggests it was over 3 meters high. That's tall for a drinking fountain, but I can't think of a better suggestion for its function.

Now to the rooftop structure. Whilst newspapers of the time confirm The Pen had a "Roof Garden", it was neither on the roof, nor was it a garden!

The HK Telegraph (8-12-1928) informed readers, "It is in the east wing of the sixth floor that the roof garden and banquetting hall are located...The centre and west wing of this floor is given over to bedrooms and rooms en suite."

As the sixth floor was the top floor of the Hotel, immediately below the roof, the rooftop structure can't have been the Roof Garden or the Banquetting Hall.

Or can it? Further information on the Banquetting Hall was provided in the HK Telegraph (8-12-1928) and the China Mail (12-12-1928), both describing it as having, "an oval and slightly domed ceiling" and "an orchestra balcony". A rather grainy photo on Page 17 of the Telegraph shows its interior to have what appears to be a rather high, domed, ceiling.

With its dome, the Banquetting Hall ceiling was probably higher than the ceilings of the "bedrooms and rooms en suite", on the sixth floor. However, the photo at;

Thanks for the extra research on this. I've written to Amelia at the HK Heritage Project to see if she can confirm your idea about the roof. I've received her out-of-office automatic reply, but hopefully she'll be able to help when she's back again.

I've emailed The Pen. Hopefully they will know what their rooftop structure was for.

I talked to Mr Kwok today, who used to work at the Peninsula. He says that the structure on the roof was staff accommodation. If you were working a night-shift, you could sleep there.

I found a photo that shows the drinking fountain from ground level. It still does not give any more clues as to what it might be:

The gardens didn't last long, by the 60's the area had become a car park.

I believe the Kadoories keep an archive concerning their various interests, including the Pen. Maybe they can help.

They did a film about the hotel recently, but that may not go into much detail about the building.

Yes, they're stored at the HK Heritage Project.

I'd written to them about the rooftop structure, but no reply yet. Since then we've had Mr Kwok's description of it as staff quarters for people working overnight.

Bob Tatz at his book launch