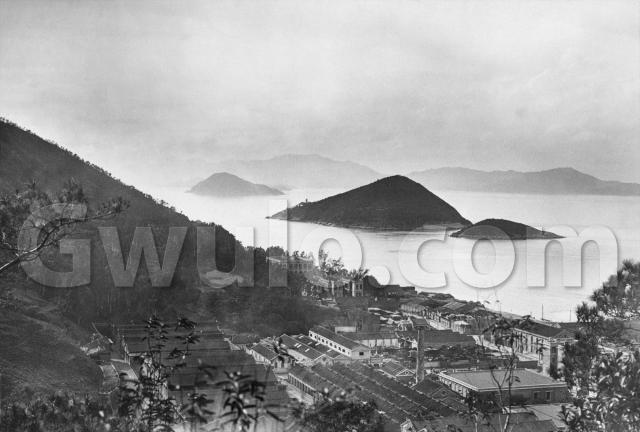 Where: The landmarks in this photo are Green Island and its lighthouse: 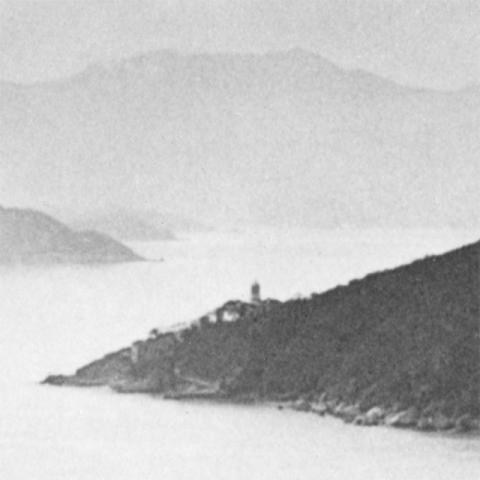 Both are still with us today:

So we're looking out to the west from Hong Kong island, over Kennedy Town and beyond.

What: We counted 14 chimneys in the last photograph [1], but there is just one to see here. And I had a hard time identifying the buildings in that last photo, but fortunately we have a map of the area this time [2]. It identifies several of the buildings: 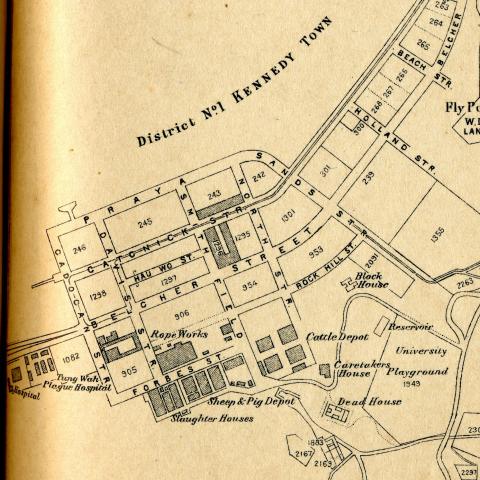 Here are the roads marked on the photo, to help line it up with the map:

In the distance, at the bottom of the slopes of Mount Davis, are these buildings: 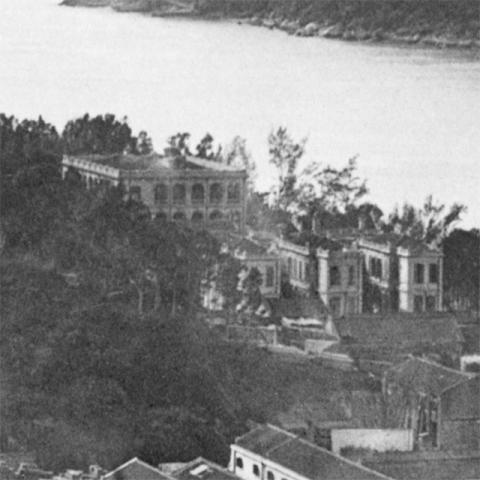 The hospitals are long gone, but this remnant of the Tung Wah hospital still stands in a small garden nearby: 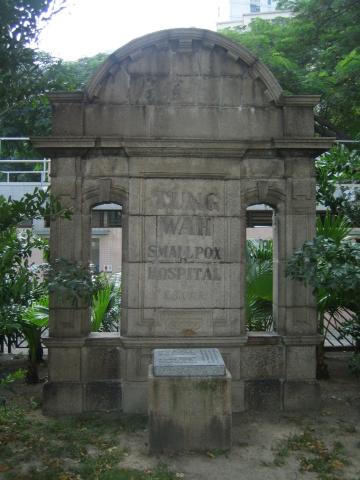 Closer to the camera, in the middle of the built-up area, are these buildings: 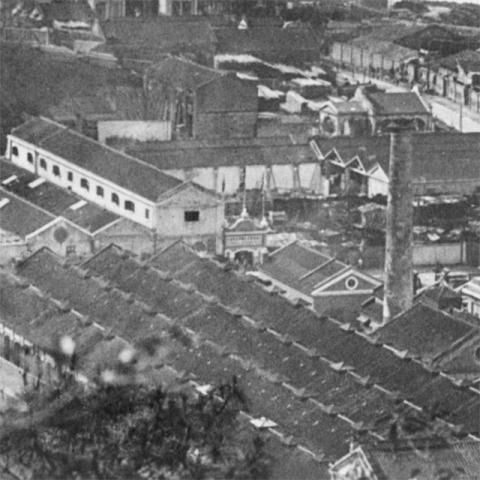 The road running across the middle of this view is Davis Street. Above it, with the fancy gateway and a courtyard, is a building shown on a 1901 map [3] as the Glass Works. It's not clear if it was still a Glass Works in 1920s, but as the outline of the buildings is the same on both maps, I'll guess it was.

Below Davis Street, the building with the chimney is the Rope Works.

Just out of sight, but running along the bottom of the photo, is the road named 'Smithfield'. A look at the map shows there are several buildings related to meat-processing in this area: Cattle / Pig / Sheep Depots and Slaughter Houses. That explains the road's name - Smithfield was, and still is, Britain's largest meat market [4].

We can't see the Cattle Depot, but the Slaughter Houses and Sheep & Pig Depot are visible over on the left: 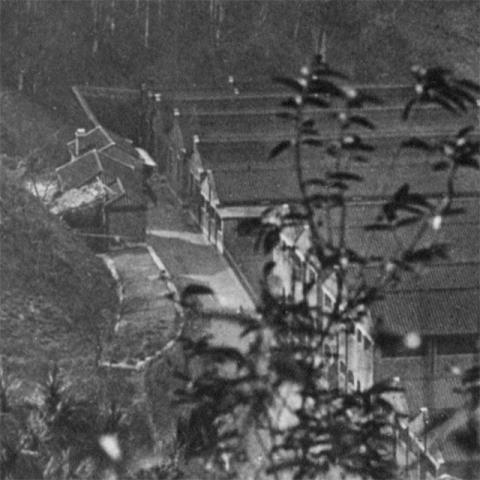 Who: I've lived around Kennedy Town since 1992. When I first moved in, there were still several direct links to this older Kennedy Town:

Today only the morgue remains. The MTR line will soon extend to Kennedy Town, and the area is undergoing a lot of redevelopment in anticipation of its arrival.

As always, it'll be great to hear from you if you can tell us any more about what we see in this photo. Questions, comments & corrections are always welcome too!

Trivia: Photos of a Plague Hospital and the Slaughter House seem odd choices for a tourist souvenir book. Until you read the caption for the photo, and understand what we're supposed to be looking at:

This photograph, taken from the recreation ground of Hongkong University, gives a glimpse of the beautiful western entrance to Hongkong's famous harbour. Most of the big passenger ships to and from the South sail via this deep and narrow passage which separates Green Island from Hongkong, while vessels to and from the North use the more magnificent eastern channel, Lyeemun Pass. The buildings seen in the foreground here are at the extreme west of Victoria City. Beyond Green Island, stretching North West, we have a chain of similar islets place like gigantic steppingstones between Hong Kong and its bigger brother Lan Tao, whose mountainous skyline can be seen in the distance.

Whether he enters Hongkong Harbour by this channel or by Lyeemun Pass the visitor never forgets the first vivid impressions made by the mighty mountains standing sentinel to that wonderful sheet of water. Though the less imposing of the two entrances, this one is, in a way, the more dramatic, for, whereas the long sheltered Lyeemun Pass prepares one for placid waters, Sulphur Channel takes the traveller suddenly from the deep swell of the vast Pacific to the lake-like surface of the harbour.

Not sure but the tramlines on Belchers Street between Cadogan and Davis Streets appear to be visible.

Can anyone tell me the location of two places in Kennedy Town that people used to go swimming: the Chung Sing Charitable Association" (direct translation from the Chinee name) and its neighbour, the "Kam Ngan Exchange" in Kennedy Town. I learnt to swim in Chung Sing in the late '50s or early '60s. I also did lifeguard training in Kam Ngan during my secondary school days in 1967. The "swimming houses" were kind of U-shaped structures, built or wood in Chung Sing and concrete in Kam Ngan, where people swam inside the U. Across the U were floating bamboo poles that delineated different depths of water. There were 2 floating pontoons further out. Some swimmers swam all the way to Green Island, across the sulphur channel. All I remember now is that I had to take the tram to Kennedy Town and walk along Victoria Road to get there, but the exact location excaped me. It would be nice to shwo them on an old map (and a  new one too!)

A long article on the Hong Kong and Macao Glass Manufacturing Company Limited in Kennedy Town is available in the Hong Kong Daily Press dated 9 January 1886. From newspaper records, the Glassworks did not last long. By 1889 the Company had closed down and reclamation was taking place on the foreshore in front of the Glassworks.  On 20 May 1894, the old Glassworks was  used as a temporary plague hospital.

It is possible that the Dead House referred to the Tung Wah Yi Chong 東華義莊 -Tung Wah Coffin Home of the Tung Wah Group of Hospitals.  Nowadays, it is at Sandy Bay.  Originally, it was located near the old Slaughter House at what is today the junction of Smithfiled Road and Porkfield Road, in front of the Caritas Community Centre.  Overseas Chinese left the coffins of their ancesters there waiting to be relocated to their home villages in the Mainland for burial.  It should not be the original location of the public mortuary / morgue now at the water front, which was originally located at mid-hill along Hill Road between Porkfulam Road and Kennedy Town.

If I remember correctly, the swimming club was located at the end of Catchick St which is the reclaimed land for the Bus Terminal, slaugher house / vegetable depot.  Dragon Boat races were held there in the 60s.

A 1958 map shows the swimming pavilions near the end of Catchick Street, as Lawrence describes.

A photo from 1968 (http://gwulo.com/node/17725) shows they've been relocated further west, after their original location was reclaimed.

Thanks to Lynn Seymour for this present-day view of the area: 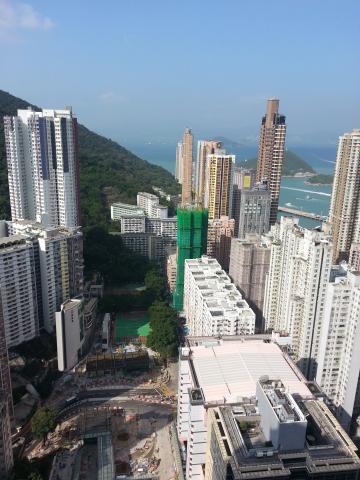 The green football pitch & basketball courts shown on the modern photo are the location of the line of buildings below the "wu" of the watermark in the old photo.

Family oral history said that my great grandfather was resettled from a village here, Fan Yee Tan (Laundry Beach?) to Telegraphic Bay (Cyberport) not long before 1900 when the area was being developed.

That's an interesting piece of information. I wonder if it was connected with a reclamation needing to move people away from a beach, or even when the area around Smithfield was developed? Do you know where your great grandfather worked at the time?

If you know the Chinese characters for Fan Yee tan, please could you add them in the comments? There's always the chance that Google will bring someone here who can tell us more. 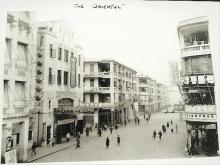