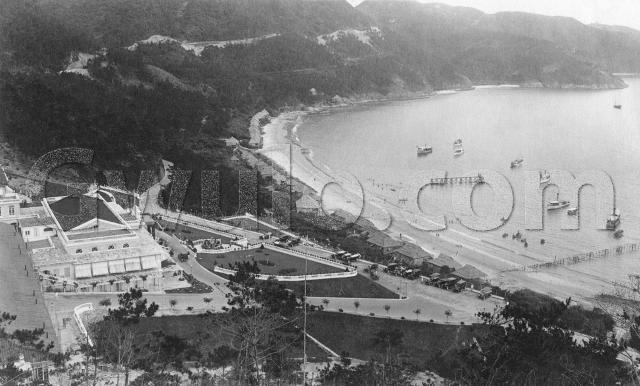 Where: We're swimming again, but this time it's at Repulse Bay. The big building on the left is the old Repulse Bay Hotel, looking out over its gardens to the beach, and the sea beyond: 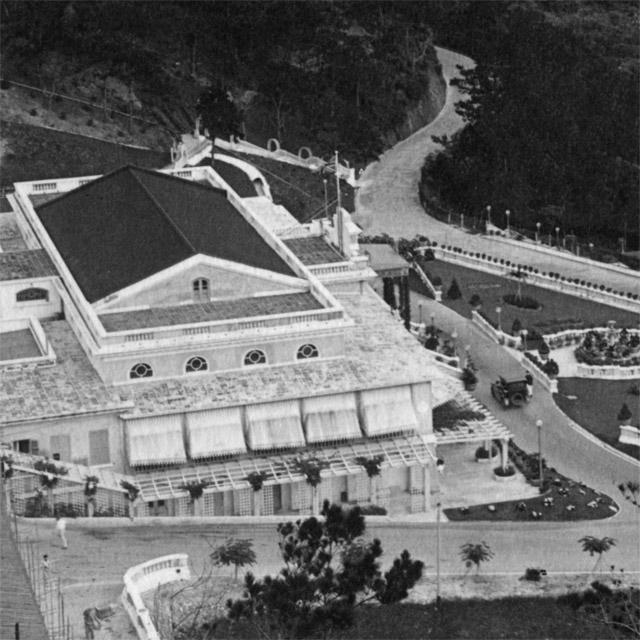 When: The hotel was opened on the 1st of January, 1920 [1], so it must be later than that. Not too much later though, judging by the look of the 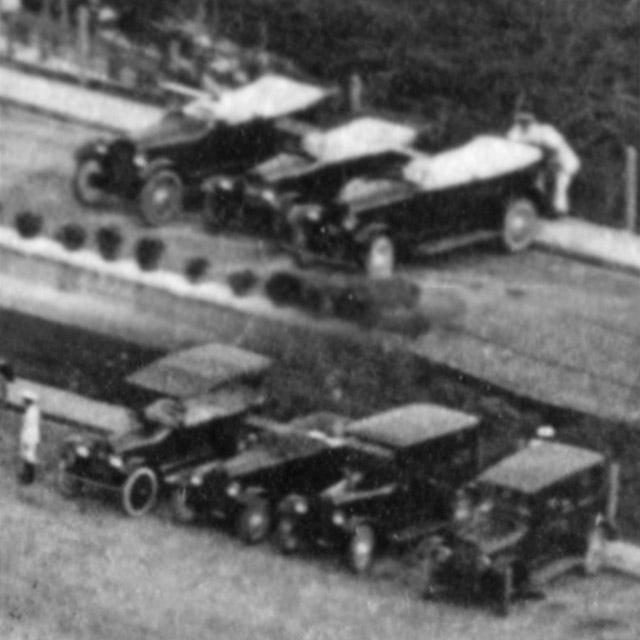 Can anyone tell us more about these models, and which years they were popular?

Who: Here are this week's swimmers: 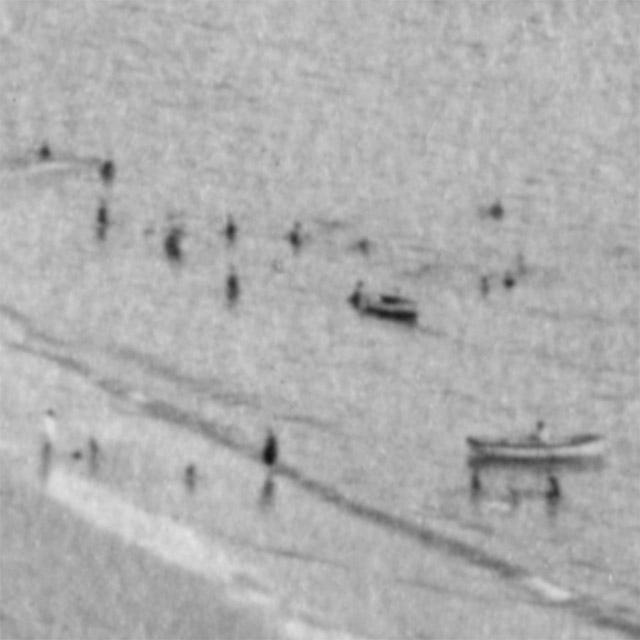 If they'd arrived here in one of those chauffer-driven cars, they were certainly a lot wealthier than the swimmers in last week's photo [2]! Or perhaps they'd made the trip here on a company launch: 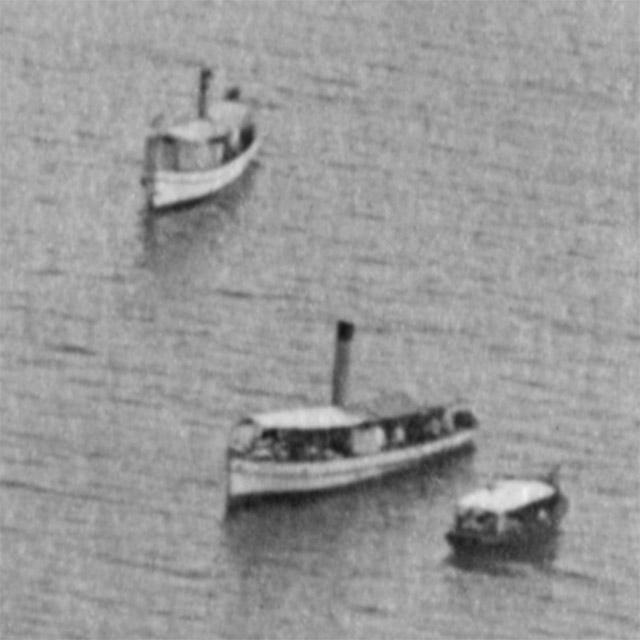 Failing that, there was always the bus:

As regards the accessibility of the hotel the problem has been solved by the Dragon Motor Company. On January 1, there is being instituted a motor bus service to Repulse Bay at the low charge of $1 return. It is hoped to have five of the small motor buses running by that time. The buses, which have been locally constructed, will accommodate 20 passengers each, all facing front. They are cushion seated and will be covered at the top. More are under construction. The trip will take about an hour each way, but when the new road that is being constructed from the Wong Nei Cheong Gap is opened it will be of much shorter duration. We learn that a service of motor bus trips round the island at a charge of $2 is contemplated when the road is completed. Government permission for the service has been granted.

What: There are a several piers visible. The long one in the foreground was built to let passengers on the launches walk to and from the beach. It doesn't appear in later photos, so it likely went out of use as more visitors arrived by car or bus. But what about the shorter "pier", out in the sea? 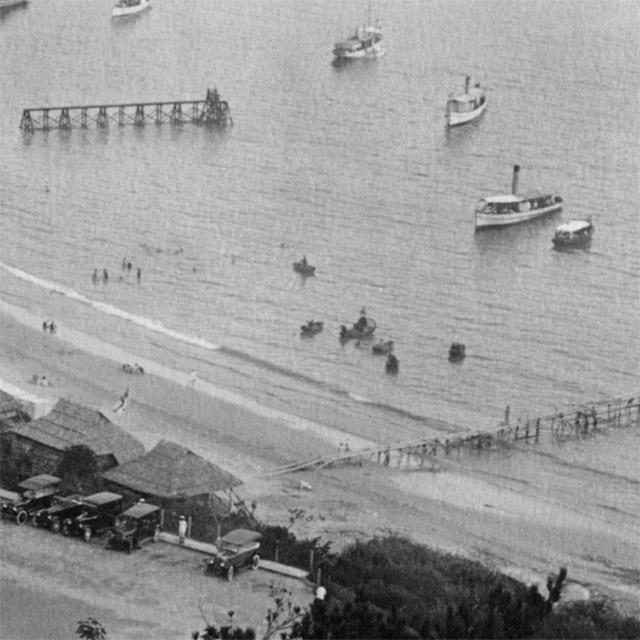 It doesn't reach the beach, so I'm not sure what it was used for. Does anyone know?

While editing the photo I noticed there's a third pier at the far end of the beach: 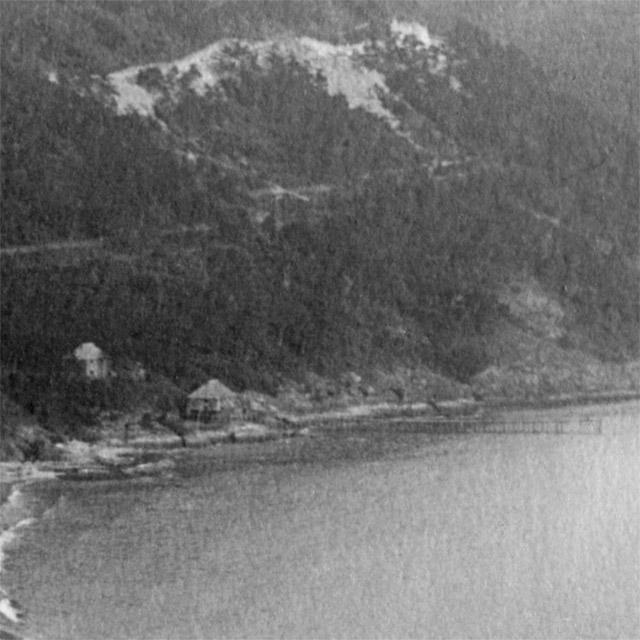 It looks as though there is a house on the slope behind it, that is somehow connected with the pier.

The other structures along the top of the beach are accomodation for visitors who prefer something simpler than a room in the hotel - larger matshed beach houses, and smaller canvas beach huts in front of them: 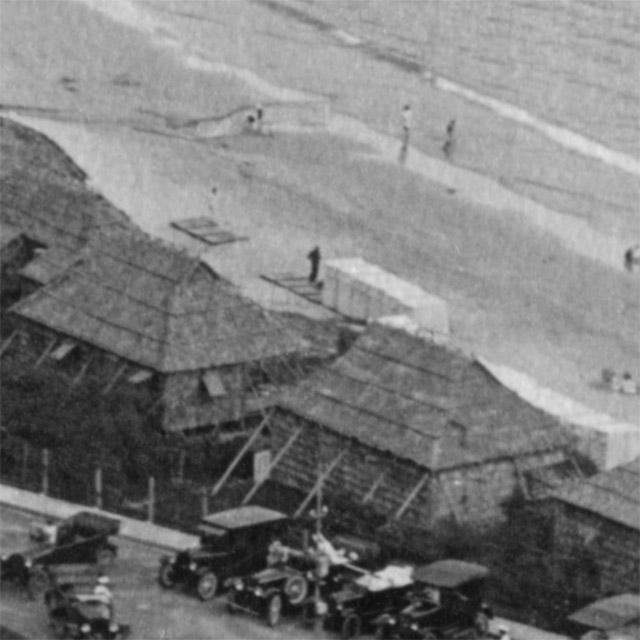 Trivia: Something else to note is how narrow the beach is in this photo. Compare it with the width of the sand in a modern satellite view:

The beach has been extended artificially, by dumping extra sand to make it wider.

Thanks for the fascinating tour. It was really an idyllic destination with charm and beauty once upon a time. No thanks to HKG and the Kadoorie family for turning it into the ghastly horror show of today all for the sake of the almighty dollar. Will the Country Parks be next?

I thought that arriving by chauffeur-driven car was impressive enough, but thanks to Martin Heyes, who says there was another method of transport that could outshine the car:

I believe that the shorter pier about which you have asked was used by flying boats, (Catalinas?), which well-heeled passengers would have used at this time.

There's a mention at http://www.therepulsebay.com/en/apartment_2.asp:

In the 1920s, Charles de Ricou, aerial pioneer, made transportation history in Hong Kong by offering the first flying boat service between Macau and Repulse Bay.

Does anyone know which years the flights were in operation? That will help narrow down the dates for the photograph.

The Catalina wasn't available until 1936.

There is a article in the Straits Times 7 July 1920 (the Kings Birthday), of Sea planes at Repulse Bay, coming from Macao.

It doesn't say what type the planes were.

Thanks Alun, so it looks as

Thanks Alun, so it looks as though the photo was taken in the early 1920s.

I found a good introduction to early flights in Hong Kong, including de Ricou, at: http://www.chingchic.com/kai-tak---the-prior-years.html

I also see we have a photo from IDJ showing one of the planes mentioned in the Straits Times article (the event happened on the 3rd of June, but they didn't report it until several weeks later): 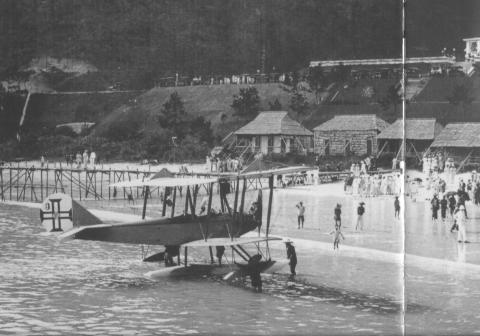 Your main post above noted the "pier" standing offshore in Repulse Bay. It's also seen in the 1920's photo at;

The pier doesn't reach the land, so it's not a normal pier. Para.120 of the 1920 Report of the Director of Public Works may hold the answer to its function. It states;

"Repulse Bay - A Diving Pier was constructed to permit of diving from the end thereof at all states of tide."

So was the "diving pier" the offshore pier, one of the others in your photo, or even out of camera shot?

The second photo at;

looks towards the Repulse Bay Hotel from a boat. There's no sign of the offshore pier. The photo is dated 1919, so the "diving pier" hadn't been built by then. The photo is one of a series of four on Flickr. The next is at;

It's wrongly labelled "Deep Water Bay", but is actually Repulse Bay and shows a wooden pier running from the beach into the water. I think it's the same pier as the one nearest the camera in your photo. If so, it had already existed in 1919, too early to be the "diving pier".

Next, the pier at the far end of the beach in your photo. It can't be ruled out as the "diving pier", but it's in quite a remote part of the Bay, not where you'd expect the Government to put it to encourage public use.

It's been suggested that the offshore pier could have served flying boats. Again it can't be ruled out, but the photo of the flying boat at Repulse Bay in 1920 in your post dated 16-9-2013 above shows that they, this model at least, could come right up to the beach, meaning an offshore pier wasn't necessary.

On balance, I tend to think that the offshore pier was the "diving pier".

Whatever the offshore pier was for, it didn't last very long as it doesn't appear in the photo at;

I haven't been able to find any mention of the "diving pier" in the annual PWD Reports after 1920, but Pages 55 & 56 of the 1923 edition say that a strong typhoon struck on 18-8-1922. "The damage done to the highways and piers was exceptionally heavy", as a result of which, "considerable repairs were executed at...(a number of named piers)...and Repulse Bay Beach". It's unclear which of the Repulse Bay piers is being referred to.

The "Bathing Facilities" section of the PWD Reports mentions Repulse Bay for the first time in the 1924 edition, and states that, "Three rafts together with the necessary attendants were provided at Repulse Bay." These rafts were mentioned again in the 1925 and 1926 Reports, but there's no mention of the "diving pier".

I wonder if the "diving pier" was destroyed in the typhoon on 18-8-1922? I'll get around to checking the old newspapers one day.

That all sounds right. Thinking about it, if a flying boat moored itself to that short pier, wouldn't there be a high chance of it swinging around and damaging its wings against the pier?

If anyone has any evidence of it being used with flying boats, please could you let us know?

I used MMIS to search for repulse bay pier or repulse bay diving in the local newspapers for the 1920s, but didn't get any results.

The Diving Pier at Repulse Bay 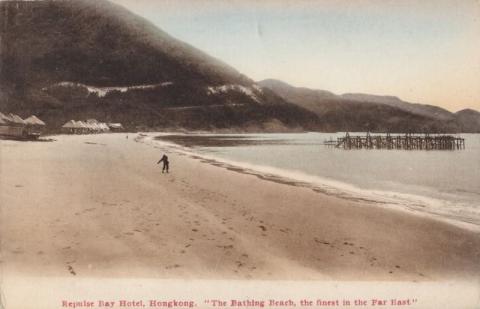 One can view the steps leading up to the diving pier. 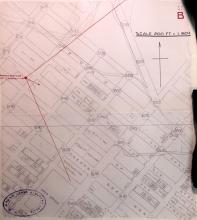