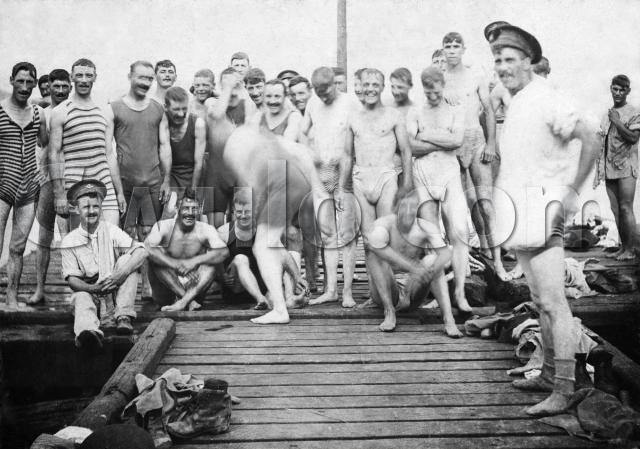 When: Here's the back of the photo: 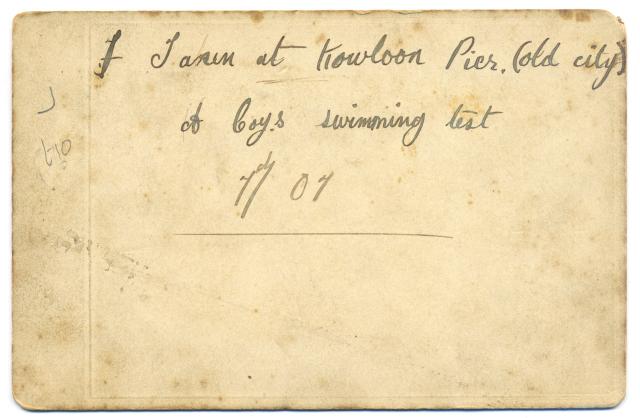 Which I'm guessing means it was taken in July 1907.

Who: Soldiers from "A" Company. A couple have their caps on, and one 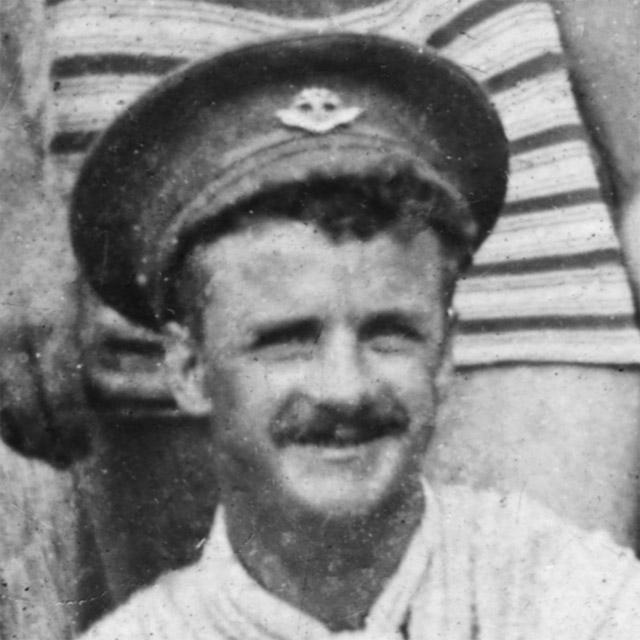 Does anyone recognise which regiment they belonged to?

Where: "Kowloon Pier (old city)". This pier disappeared long ago, buried under the reclamation that later became the Kai Tak Airport. However, after the airport closed archeologists went looking for the pier, and found large sections of it were relatively intact. Here's a satellite view of the area today - that large diagonal line pointing to 10 o'clock is the excavated pier:

The pier was a modification of the earlier Long Jin / Lung Tsun Pier [1].

I bought this photo as part of a small set of three. The other two photos show the soldiers living up at Mount Austin Barracks on the Peak, so why had they come all the way over here to swim?

Modesty perhaps? The New Territories were less than ten years old, and Kowloon City would have been off the beaten track

What: I mention modesty because of their swimming suits. The men on the left are dressed in the typical suits of the time: 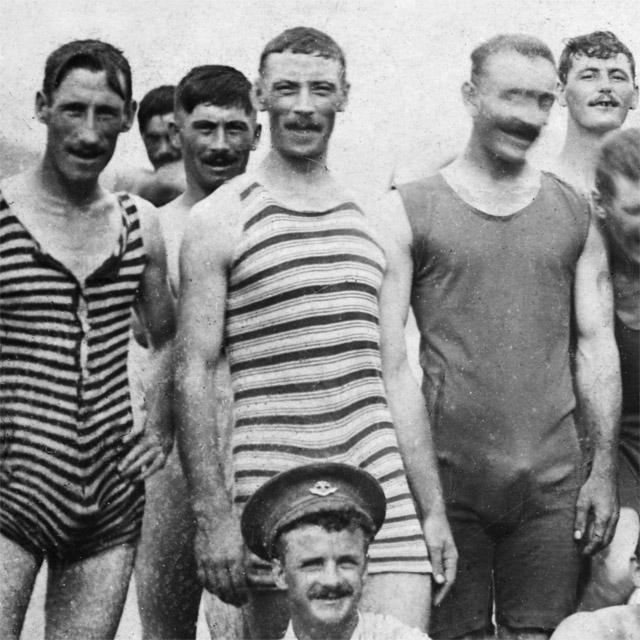 But the group on the right are more skimpily attired: 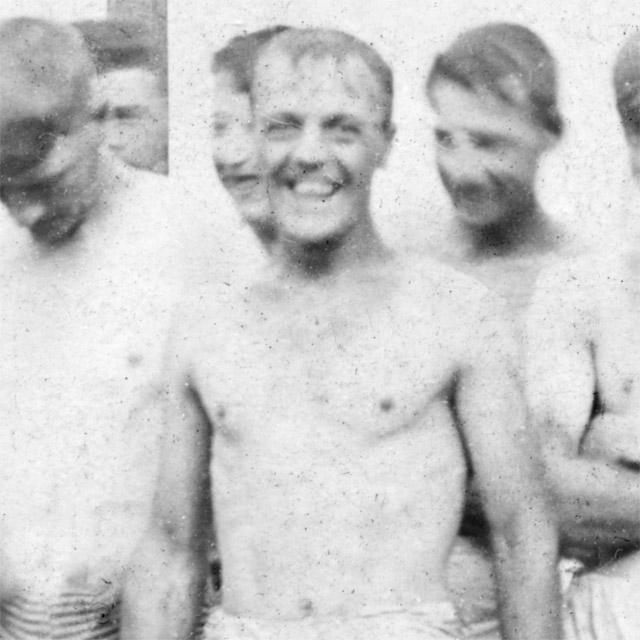 If there were any ladies present, this topless style would have been considered indecent according to the customs of 1907 [2]! Maybe that's why they went out to this remote pier to swim?

We have several other old photos tagged swimming: http://gwulo.com/taxonomy/term/4492/photos-gallery

If you can add any more, please could you upload them for us to see? Here's how: http://gwulo.com/node/2076

Trivia: This style of photo was known as a "cabinet card". From the 1870s on, if you bought a photograph from a professional photographer you'd probably receive it as a cabinet card like this one.

Each one has a thick card backing measuring a standard 4¼ by 6½ inches. The photo is stuck on one side and there was often a photographer's logo on both the front and back of the card. This example has an unsually plain layout: 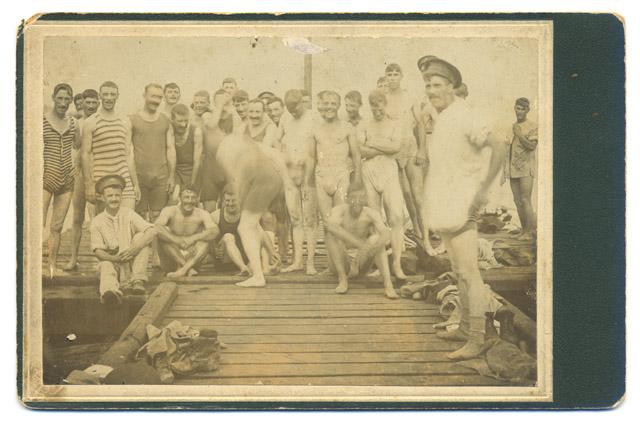 Front view of this photo on its original cabinet card mount: http://gwulo.com/node/17184

By 1907, cabinet cards were going out of fashion. Kodak's Box Brownie was encouraging more people to take their own photographs, and professional photographers were switching to different formats [3].

Thanks to Judith for pointing

I've updated the text above.

Between 1906 and 1908 the sole Infantry Battalion in Hong Kong was the 2nd Battalion,Queen's Own Royal West Kent Regiment.Their cap badge was the Horse of Kent (Invicta),which this does not appear to be.

1314, Please can you let us know how you traced which regiment was in Hong Kong at a given time? That will be a useful trick to know for future.

I searched for regiment hong kong 1907, and turned up a mention of the Middlesex Regiment winning a polo match in Hong Kong that year: http://newspapers.nl.sg/Digitised/Article/singfreepressb19080929.2.47.aspx

I took another look at the other photos in the set, and one has a much clearer view of the badge: 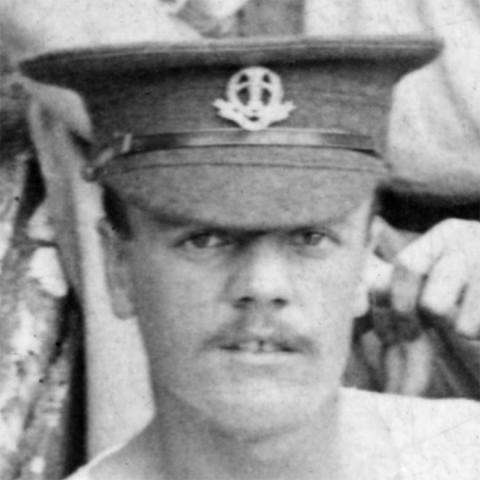 Which confirms it is the Middlesex - see this photo for comparison: http://www.heartsanddaggers.co.uk/The%20middlesex%20Regiment%20Cap%20Badge.html

My earlier is in error.

Original info on QORWK Regt from a list in Harfield - British and Indian Armies on the China Coast 1785 - 1985.This list omits the the 3rd Battalion Middlesex Regiment who arrived in Hong Kong on 30th October of  1906 and were billeted in temporary accomodation on the Murray Barracks Parade Ground ! Four of their companies then went to North China to relieve companies of the QORWK.In 1907 the infantry in HK comprised the HQ and 4 Companies of the Mx,together with  2 Indian Army Battalions.The Mount Austin Barracks were later the home of the Mx Regt.

So it appears we have a group of swimmers from 'A' Coy,3rd Middlesex Regiment !

Thanks for that - good to have them identified.

The other photos of soldiers I've posted have also been from the Middlesex Regiment, though from a later visit in 1917-18: 1917. 25th Middlesex Regiment Concert Party and 1918 Lookout at Cape D'Aguilar. It's just by coincidence though, as the photos were bought at different times and from different sources.

Harbour swimming in the 1840s

On the subject of pollution in the harbour rather than swimwear, Samuel Gurney Cresswell, a midshipman writing home to his parents in July 1844 recounted that a French frigate with four men in the sick bay piped all hands to bathe in the harbour after lunch at about 2 pm and the next day there were 124 men on their sick list .... This seems to have been a consequence of the practice of lowering the bodies of deceased sailors into the sea, even in the harbour itself.

(War, Ice and Piracy: The remarkable career of a Victorian Sailor)

It seems a long way to travel to Kowloon City for a swimming test. That said, in July 1907, the Middlesex Regiment 'A' and 'B' teams took part in a Water Polo Shield Competition amongst other clubs such as VRC, Corinthians, RHKYC, Royal Engineers etc that was held at the VRC enclosure. The photo shown could be such of swimming trial for the competition.

Hi all, I hope that I am not missing something here, but the photo of the smiling chap at the top, wearing his uniform cap and surrounded by his smiling chums in their quaint swimsuits, does NOT appear to be that of a member of the Middlesex Regt.

That cap badge does not look like one of the Middlesex to me. I stand to be corrected, of course. Which begs the question, to which Regiment does this soldier belong?

Unfortunately the photo of the swimmers doesn't have any other clear shots of their cap badges, and the one on the smiling man is at an angle. But here I've stretched it out to be closer in shape to the clearer badge from the second photo:

Again, not sharp enough to be 100% sure, but they look similar enough to me to both be Middlesex badges, and the other notes mentioned above show the Middlesex were in Hong Kong at the time and taking place in swimming events. So they are still my best guess at the moment.