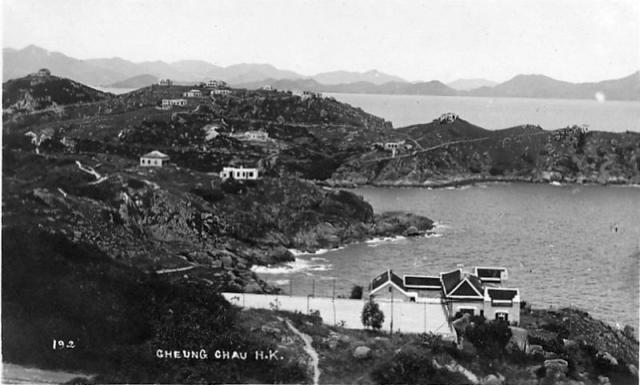 Thank you for posting this photo

The distant background horizon lies the Lamma Island in front of the south Hong kong. Then within this Cheung Chau photo, the highest hill land being seen here is the Far Peng area which has Kwun Yum Wan ( Afternoon Beach) off its western slope and Chi Ma Heng off its northern and eastern slopes.

Near the far Left in the picture probably run the famous Peak Road and it turns southward along the Nam Tam Wan ( means South Cove Beach Land) and bends westward to the Sen Yan Tseng area. There were not many houses in the 1920s and this photo helps to uncover the real physical feature of the island's oceanica ( land with ocean view). Basically the Nam Tam Wan area was the most beautiful and comfortable region of Cheung Chau island, a ideal resort area  to live or to getaway for many reasons.

Thanks to the historical partition policy in the early 1900s, the area was well protected from aggressive development seen everywhere over the island town, most inhabitants on the tiny island enjoy its beauty regardless of the past heritage.

The view in the picture is probably being taken from the same  high place by the site of House #29. Similar view also appeared on Laura's Mystery Rock photo (1937--1941). Tall trees were quite rare and the land probably was grassy everywhere. Boulders and rock land were common near the cliffs.

By 1950s the hills of Nam Tam Wan were already forested with matured evengreen and conifereous trees such as firs, pines, and spruces that was very different from the native trees on the island. They were the natural wind breakers too during the typhoon and winter seasons.

Here the house and its fenced playground in the foreground of this photo  seemed to be the McPherson House which was by the cliff  not too far from the Laura's Mystery Rock. It's maybe a second residence for the family of  J L McPherson during their stay on the island.

There were missionaries, mostly in transit or in vacations, lived on some of the houses in the picture. Actually before the Opium War of 1842, a Baptist Mission church operated by the American churchmen was already there in the Tung Wan area. By 1950s, the policy in mainland China caused the relocation of the Alliance Bible College from Kwangxi to  Cheung Chau's Nam Tam Wan area. The geographical choice was indeed superb for a religious campus. And there remained to be ideal place for various religion establishments.

Next time as you visit the island, see for yourself the beauty and tranquillity  side of the island

Of course, Nam Tam Wan was also famous for shore fishing but be careful of the tidal waves.

I've been looking at the map again:

I think the house in the foreground with the tennis court could be 27A, then the two houses on the small headland in the middle distance could be 24 & 25. Does that sound right?

You are right, in the mid-distance there are two houses. Actually the left one is a bit further away from the right one.

The left one stands close to the Peak Road has the address as #25 Peak Road on the 1926 Cheung Chau which is an information coming to my attention from the Translation copy of Ruth Hitchcock's biography. She purchased the property as a vacation home for herself, a missionary of the Hebron Mission in China, and other fellow missionaries out of the generosity of her Californian parents. Problably this house would be the European House on the Lot #25. The original House was damaged by the Jap and was restored with a newer look. It also came with a big garden or yard, in my time of the 1950s, a dense forest of firs and pines with Peak Road on its west perimeter. For few years we came to sing X'mas carol to this House, on the front yard to Miss Hitchcock and then on the backyard to the tenant family, the Xins back then.

Today the property stands a dormitory and is under the ownership of the Bible College next door.

The other European House next to the water should be House #24. I don't have much attention for that. Yet me and my friends had climbed up this part of the hill from the water on the edge of this property like after fishing or swimming in the vicinity during the hot summer days. The water here was among the worse shoreline and quite unsafe in general. However we had to  climb up out of the water here, it was an adventureous experience but couldn't leak about to the family for we didn't want to get lessoned.

For quite a while, I try to look carefully on those old photos and the old maps and I feel I should have  made clear that the European House #25 is really not the same one stood at #25 Peak Road on CC island, rather having about hundred meters apart from each other.

It seems to me that in the very early years, the system of address about the residences on the CC's European District was quite odd. They are being numbered somewhat like in groups, not necessary following either a road or a trail. Most likely depends on a particular hillet or ridge.

So later on it comes in the name of Peak Road, and address system re-defines each of them with a correct number by the correspondent road or trail.

These three digit number  defines the other locations where the westerners may stay for different reasons...... Some of them includes the hospital, police station, school, churches, powerhouse, hostel....

By the way, could you keep an eye on the Erythrina Flowering season as cold winter comes for next few months in HK. The song I did is very good. I hope it will be released properly soon.