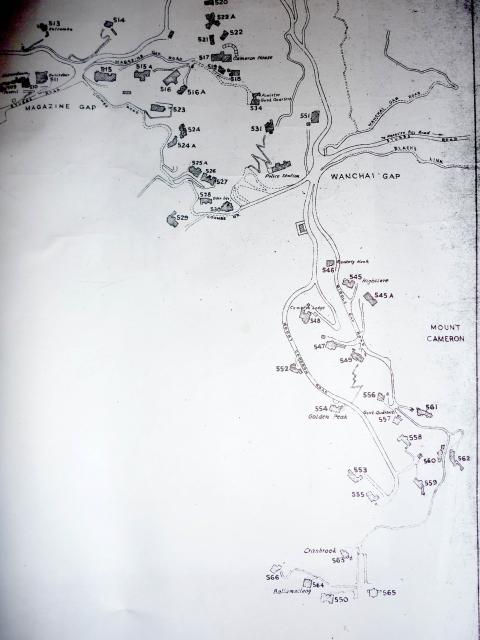 Portion of a map of the Peak District. Copy available from Survey & Mapping Office, their ref: HG36.

Given that Kennedy-Skipton lived in 565 The Peak in the position Deputy Controller of Foods, where would the likes of the Colonial Secretary, Attorney General, Financial Secretary etc, have resided during this time frame ie:1938 to 1941?

Michael, I don't have an answer for your regarding where the top government officals resided from 1938 to 1941.  It seems the government sold 565 The Peak not too long after this map to American Express.  I found the following from the 1948 Telephone Directory:

Can anyone identify the individuals that resided on Middle Gap Rd at this time?  I believe C.B. Moller was part of the Moller Group of Companies that owned 6 Middle Gap Rd.

From the following source:

Not the Slightest Chance: The Defence of Hong Kong, 1941 by Tony Banham

It seems these three valiant soldiers were buried at 562 The Peak.

Later on it the book it lists: Spink, George - Signalman, Royal Corps of Signals, HK Sig. Coy. as being buried at 562 Coombe Rd, The Peak.  Is there a difference between the two addresses?

Michael, I guess they'd be higher up the Peak around Mount Gough. You might get lucky searching for title+residence (eg "financial secretary's residence") in the government records & newspapers from that time.

Compradore, the reference (142) for the mention of Spinks on pg 180 of Tony's book is a "Prisoner of War Diary", so there's a fair chance the exact details would have been a bit muddled up. I think it's probably the same address as "562, The Peak".

Out of interest I looked at the Jurors lists for 1938 to 1941 and unless my eyes have gone I could not find any Juror listed as living in any of the houses in that area ie:545 to 566 The Peak.

I note that 557 is shown as Govt. Quarters. Could it be that most of these residences were originally built for senior colonial officers.

If someone can prove me wrong, I will be most elated.

Hi Compradore - Here's one: See the following summary and detailed bios of Lt Cdr Angus A Mackenzie.  I was just surfing through the web, so not 100% sure if this was the gentleman who lived in No. 564 in 1948.  But the "circumstantial evidence" looks reasonably strong:

-  Rank, initials and surname all match with the telephone directory (the Holywell bio also specifically mentions that his surname should be spelled with a small "k").

-  Arrived in Hong Kong in Oct 1945 whilst serving in the Royal Naval Reserve.  Left the navy in Jul 1946 but stayed on in HK and became a businessman (perhaps not that likely for a junior/middle ranking officer in the forces to have his own house on the Peak, but a businessman/taipan - which was what he's become by 1948 - may well have had one).

Moved to Japan a few years later.  Sounds like he had a most interesting and colourful career.

I believe the colonial secretaries residence was that which was on the summit of Leighton Hill.

Leighton Hill did have government quarters (see this page), and they were damaged in the fighting you describe. But photos from the 50s (eg this one) show the area already cleared and new government quarters built in their place. So I'm not sure that's where the Colonial Secretary lived (plus it seems a bit low down for such a senior post - they generally lived up around the Peak somewhere.)

Does anyone know the name of the man in that role in 1941? Maybe that will help track down his residence.

The colonial secretary at the time was F.C.Gimson(arrivedHK

This may help you out.

It may be easier to search for Norman Lockhart Smith who was Colonial Secretary from 1937 to 1941. Gimson was only there a week before the Japanese attack.

Norman Lockhart Smith was appointed Colonial Secretary on 26 November 1936.  He was replaced by Franklin Gimson who arrived in Hong Kong on the day of the Japanese attack on Hong Kong on 8 December 1941. See also here

Thanks for the reply

My grandfather stayed in Hong Kong for business etc

to England, my grandparenst stayed in Hong Kong until the mid 60's

he was in the Green Jackets.

They lived at Repulse Bay and Stanley Camp

Yes please, any photos from that time will be gladly received. Here's how to upload a photo to the site: http://gwulo.com/node/2076

Thanks for the extra

Thanks for the extra information about the Moller family on Middle Road. I've made individual pages for them and linked them to the names in your comment above.

On July 8th, 1939, the SCMP gave the address of the Secretary of the Left Book Club, Joan Staniforth, as 557 the Peak. She was Hilda Selwyn-Clarke's 'domestic assistant' and secretarial helper, so I think this almost certainly means that's where the Selwyn-Clarkes were living. As Dr. Selwyn-Clarke was the Director of Medical Services, this supports the idea that the houses in this sequence were built for senior government officials.  Staniforth left Hong Kong on June 6, 1940 and became secretary to Robert Lim of the Chinese Red Cross. She seems to have been replaced as Mary's 'governess' by a Chinese nurse called Miriam.

On June 19, 1935 the SCMP reported on page 9 that Mrs H. F. Crapnell of 557 the Peak had been bitten by a dog belonging to E. L. Lammert of No. 556. It seems that Mr Crapnell was NOT a government official but secretary of the Star Ferry company.

The Selwyn-Clarkes lived 'first on Mount Cameron, 800 ft above the sea and with wonderful views, and later among the cooler breezes of the Mount Kellet area of the Peak, 400 ft higher still'.

We lived in the Moller buidling on Mt. Cameron in the 1950s and the address was 519 The Peak.  This was a 6 floor apartment block with some open garaging.  My father worked for Mollers and several of the families there were connected with Mollers but I don't think all of them were.