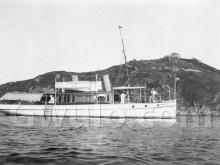 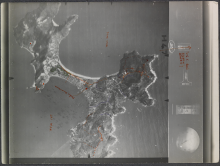 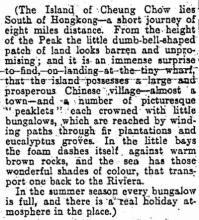 Can anyone tell me about Cheung Chow during the 1920's? My Grandparents lived in Canton at this time, my Grandfather working for Dodwell Co Ltd. I have some extrodinary photos of ex-patriots apparently camping in tent-like shelters made of straw. I recognise my Grandmother, and Mother in some of the pictures. The page has been labeled Cheung Chow, and some other people identified with names I recognise from my Grandparents talking about their friends. My Grandparents though not missionaries will have been part of any Methodist comunity while in China. The general look of the terrain on which the shelters stood looks similar to the picture you have of Cheung Chou in the 1930's

The notes of the Annual Meeting of the Cheung Chow Residents' Association which is available in the daily newspapers on the Hong Kong Public Library website provides information about expatriate life on Cheung Chau (Cheung Chow) in the 1920s: Advanced Search page

Prior to 1923, the Association was called the Cheung Chow Summer Resort Association. 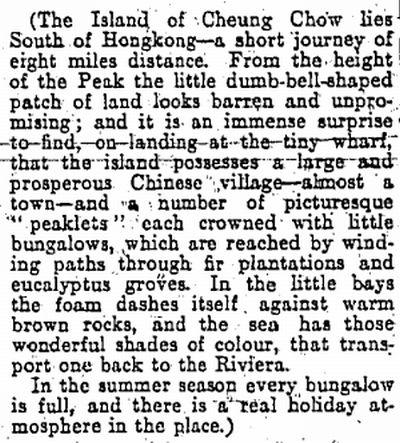 This would be interesting to see:

About Cheung Chau in the 1936 film

I was happy to be able to recognise all the places in the last part of this film about Cheung Chow.

The farming cow or buffalo in the field and the water pond with villagers around was by the Kwun Yim Wan. The Hill far away was of the North landscape of the 'Dumbell' island.

The two European houses were the same as we saw during my early childhood days of the early 1950s. The hill had more trees near the house sites. One of them was known as 'Kay Yuen Bi Shu'. The words Bi Shu mean a resort residence. I'm not quite sure of the words Kay Yuen since I never see the name plate, not knowing the exact words in display. In my own idea, it sounds like to mean as Wonderful Garden.

The Harbour viewing was just the same we got during the early 1950s. Not much different,  there it was a bay with  lots of fishermen junks and sampans.

The feeling is so personal.

In 1962, I toured Cheung Chau with my classmates.   The houses filmed at 14:38 were most likely the same as those I saw.  It was my first venture outside Kowloon/HK island and this scene takes me back to that moment when our ferry was coming to dock.  Thanks.

Don Ady wrote these down in 2003, as part of a letter to his friend Donald Van Ettens. Both their fathers were missionaries in China, and the damilies lived for a time on Cheung Chau.

In a revisit to Cheung Chow at age 16 in 1948 and in my late coming growth spurt, I looked for the hills and couldn't find them. They had SHRUNK! Did you get that same feeling?

When your first grade class was gathered all in Mrs. Rae's lap at the same time, did you ever see whales offshore? That is one of my memories.

In my class at the Rae's were Johny Karcher (Chinese, adopted) and a Canadian boy, Corky Cokefield. Corky said a lot of 4 letter words out of class, but I never repeated them nor ever got in that habit. Once they egged me into joining them in throwing rocks at a bees' nest - it was on the rock where Mr. Rae had built a concrete spiral ramp for toy cars. I have a mediocre arm and poor aim, but strangely can often hit things on a first try then maybe never again. So, I hit it with my first rock, and we all ran from the avenging swarm. Only one sting among us - painfully on the back of my head.

Did you ever go through Smuggler's Cave aka Dynamite Cave? Not far from your house? I did so once with Johnny & Corky. I was the leader after they firmly shoved me in front. Sqirming out the end, I noted that the daylight was plugged by something - a masked face! A gruff voice said, in Chinese, "Your money or your life!". Having no money, I figured on getting killed. Gasps from all of us. Then, a snort, giggle, and guffaw which sounded like my brother Bob! And it was him.

Did you ever get down to Afternoon Beach? I well remember getting lots of sea urchin spines in my feet there. They were buried like booby traps under the sand. And swimming there, of course. Brother Bob used to go way out, fearless of sharks, but I always got a bit of agaraphobia in open water and stopped at the raft. Australian and Canadian servicemen showed up there - my introduction to "Strine" (Australian accent) - I remembered the phrase "I sigh, can you ply on the pie-ano?".

My folks stayed in Canton after the war, three years. I was fortunate to go to SAS (Shanghai American School) then. In late spring in 1949 I left Shanghai very abruptly with Communist armies closing in rapidly. We left Canton 6 weeks later, and my folks finished out until 1965 in Hong Kong. 1949-1950 was a furlough year. I attended High School the last year in Evanston Illinois. Had also lived there in 1936 and 1945. Then off to the College of Wooster in Ohio.

My friend was named Donald Van Etten.  He had some brothers, one of whom was named Upton and called "Uppy".  When I was perhaps age 6 with Uppy and my brother Bob were about 11,  Uppy one day saw a broken loose mine floating just off rocks on the shore.  He threw stones at it until it blew up - he had ducked in time in a rock crevice.  Uppy and my brother were "always in trouble"!

The Van Etten family repatriated before the war - not in Stanley. ((Don was still in Hong Kong when the Japanese arrived. You can read his experiences at: http://gwulo.com/node/12889/view-pages)) Mr. Van Etten at some point died early, leaving his boys fatherless.  Missionary family.  I do not recall any particulars of them now other than that they lived a number of houses to the East of the house we rented, a bit closer to Hong Kong.

My sister, who is older than me, remembers Cheung Chau (likely a lot better than I do) and is interested in especially older photos of there and of Hong Kong and the area.  She remembered well the occasion when the dead whale washed ashore.  She and my brother rushed home, excitedly, to announce it.  "My life was over" when I was denied permission to run off to get a look for myself - age 6 perhaps that was - but I got over that by this time, haha!  It allegedly had a knockout odor.  That did not keep away a swarm of older kids, with some boys climbing "aboard" and taking samples with knives. Laura Ziegler Darnell did see the whale, I think.  We could see the whales spouting, some times.

It was my sister holding me when I saw the white coral tree (somewhere) on Morning Beach at my sole swim on that side of the island.

My sister elaborated for me on the Van Ettens:

The Van Ettens had five sons: the oldest, Al, was my age--I saw him a few times when he and his family lived in Puyallup; then came Uppy (Upton),  Tommy, Donny, and I can't remember the youngest's name.  Their father was a doctor who died of typhoid the last year we lived on Cheung Chau, after which they had to come back to the U.S.

Thanks to Don & his sister for sharing their memories with us.

While living on Cheung Chau island...

Did they go to any local school at all?

Where they got their schooling?

The video can be seen here

Thanks moddsey for the video.   Year 1939, the girl's age and her hair style, happy dog though not so the cat,  lovely parents.  I think these matches one famous movie if the wind had been much stronger.  Regards,  Peter

This house is one of the ghost houses (Tao Yuen "濤苑") in Cheung Chau.
It is within the boundary of no.14 in 1938 map.
Here is the video taken around and inside the house in 2017
Below is a comparison 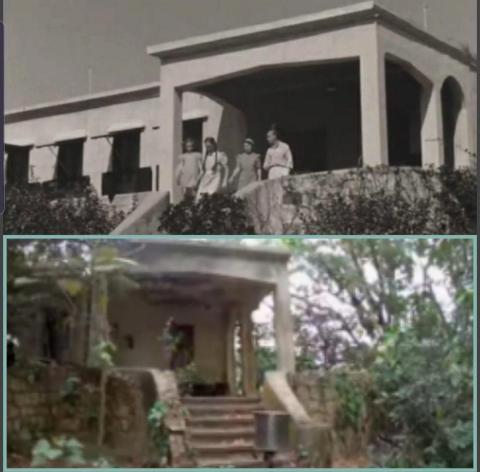 The Waves Garden on Cheung Chau

Thanks for the picture with people by the house. As a kid, I learnt from CC folks that the Tsang Fook family had a big house here. They started the piano business in the city. This house was quite close to my high school down the road during the 1960s.

The Waves Garden was in quite a good shape back in the 1960s but hardly for us to know about the residents nor their visitors. Other sources reveal that the property got neglected for the Tsang did not have a direct descendent and his family relatives ( the Law Family ) had keen interest only on running the Tsang Fook  piano & music business.

I don't think it is a ghost house. Somehow the SAR office should know better.