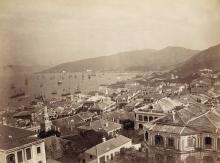 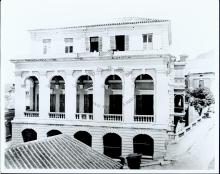 The Club Lusitano, situated in Shelley Street provides for the Portuguese Community just as the Hongkong Club and the Club Germania do for the British and German residents. A good Concert room, library, reading rooms and billiard rooms form the principal features of the establishment.

We hear that the Club Lusitano is to be opened on the 17th instant. A grand ball is to be given on the occasion, at which it is expected Governor Horta and other of the Macao officials will be present. Regarding the unfortunate difference between this institution and the old Club in Gough Street, it is intended to send invitations this year to the members of the latter to this inauguration festival. This step may tend to remove any jealousy and feeling of animosity between the two Clubs. It is understood that the Macao Governor is desirous of bringing about an amalgamation of the two institutions.

I skimmed the other newspapers available in the HK public Library MMIS for December 1866, but didn't find any other mentions. Unfortunately they don't have any newspapers from 18th Dec, the day they'd most likely have reported on its opening.

Its foundation goes back to 1865. In the early Sixties the need for a central meeting place for the community was felt - somewhere for them to gather for recreation, social intercourse and exchanges of views and several prominent Portuguese decided to form a club, and to name it the Club Lusitano, Originally the site was in Shelley Street, facing on Elgin Street, that premises comprising an attractive three storeyed building, but in 1919-20, the move was made to the present club-house in Ice House Street

The-foundation stone of their fine club-house was laid on December 26, 1865, in the presence of the Acting Governor, the Hon. Mr. W. T. Mercer, attended by the Civil, military and Naval Authorities of the Colony: and on December 17, 1866, the inauguration took place the celebration being in the form of a grand ball at which the Governors of Macao and Hongkong were present, together with a large number of the foreign element including half the residents of Macao. The building was of most substantial character and when later vacated became the private residence of a wealthy Chinese. Its appointments were complete, with reading-room and library billiard dining and card rooms, and also several bed-rooms for members. There was also a ball-room one of the best in Hongkong and a theatre originally attached in which travelling opera and comedy companies often used to perform, as also the local amateur Dramatic Society of its day. This theatre was demolished after the City Hall had been completed, as the Theatre Royal then came into use.

The demolition of the club’s theatre was evidently a step which was regretted by many. Looking through the Hongkong Times of June, 1873, I find the following: " We are sorry to hear that the Directors of. the Lusitano Club, have determined to put an end to their beautiful theatre by pulling it down as soon as the last performance which is to be given some time this week by the Portuguese Amateurs has taken place. In lieu of the theatre, they are going to enlarge the Club, with rooms for the.members, the present accommodation being deemed insufficient.

Its ballroom was thing to inspire poetry. Somewhere in Chancery Lane, was also the Club Venatorio and in Peel Street, if I remember alright, the Club Basco da Gama.

One of the club’s founders was Mr. J. A. Barretto and in the Hongkong Telegraph of November 26, 1881, appears the following: “ The death is announced at Manilla of J. A. Barretto, one of the oldest residents of the Colony. Mr. Barretta was for a long time book-keeper to Messrs. Jardine, Matheson & Co., and afterwards acted as Portuguese Consul in Hongkong His name was closely associated with the establishment of the Club Lusitano in fact, he may be said to have been the prime mover in the foundation of that institution as he advanced no less than three fourths of the money necessary for its establishment. Owing to the important services rendered by him, a life-size likeness of  Mr. Barretto was placed in the Hall of the Club although it was afterwards removed when the Club was free from debt, which act was anything but a compliment to the deceased gentleman. 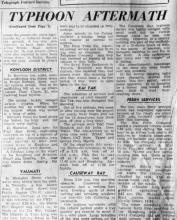