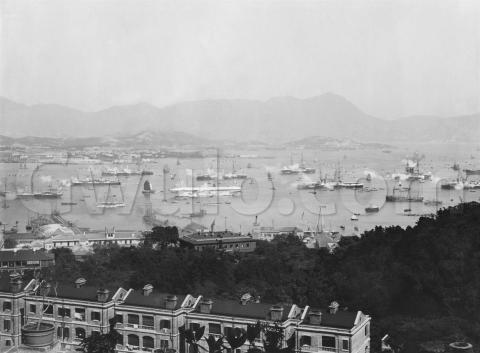 When: A note pencilled on the back of the photo explains:

His birthday was the 9th of November, so this photo is exactly 113 years old!

Here is the newspaper's description:

The Warships in the Harbour, the English mail steamer at Kowloon Wharf and some of the German merchant ships were decorated, rainbow-style, to-day in honour of the birthday of King Edward. A salute was fired at noon by the various warships, and the afternoon was observed generally as a holiday. Monday has been fixed as the official holiday, when offices and stores will be closed. A levee will be held in honour of the occasion at Government House, this afternoon at 4 o'clock.

Who: A king? How peculiar.

When the British came ashore at Hong Kong in 1841, Queen Victoria was 21 years old and had reigned for just three years. She would reign for another sixty years, until her death on the 22nd of January, 1901 [1].

It must have seemed strange to have a King's birthday after sixty years of "God save the Queen".

What: Royal Navy ships, and lots of them. This was the time when Britain's navy followed the two-power standard, ie the British fleet should be as strong as the combined forces of any two other countries [2].

Here are closer views of the ships (they appear from left to right in the main photo):

If any shipping experts are reading, how many can you identify? The only one I recognise is the obvious one:

Something to note about the ships is the dark colour of their hulls. Today we expect navy ships to be grey coloured - we even call it "battleship grey" [3]. The navy changed to the grey colour scheme in 1903, just two years after this photo was taken.

Where: We're up on Kennedy Road, or possibly a garden just above Kennedy Road, looking north across the army's land towards the harbour. Down at the bottom of the photo is a line of houses. They are marked "A. Block" on a map of the area from the 1920s [4], and stood where the pagoda and tai chi garden are in today's Hong Kong Park. 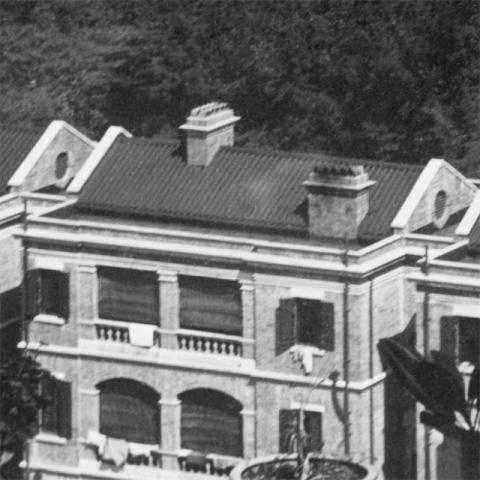 Above them is Headquarters House, still standing today but now called Flagstaff House: 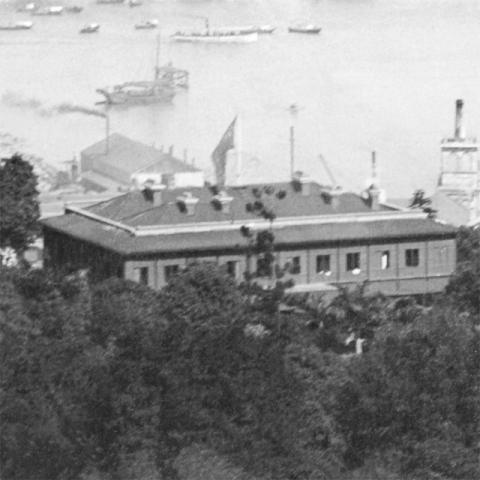 Down at the water's edge, a couple of temporary piers stretch out to the sea. Here's the one on the left: 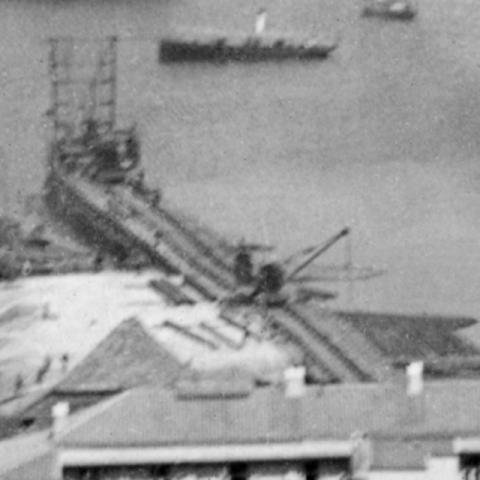 The piers each have railway lines on, and a steam crane can be seen. They're part of the construction work for the extension to the Royal Naval Dockyard.

Finaly, across the harbour Tsim Sha Tsui is still a bay, yet to be filled in by reclamation: 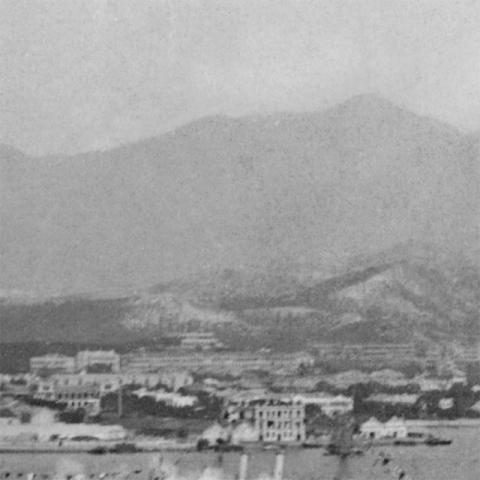 If you can see anything else in the photo of interest, please let us know about it in the comments below.

Thanks Moddsey. Looking at the main photo there's what looks like a start of the new seawall under construction on the right (below the M of the watermark). Your postcard view is taken a bit further east than the photo, and confirms it.

I lived with my parents in Flat 2, Birdwood Block, Victoria Barracks from 1951 until my father, Major Kenneth Charles Harvey, left the Army in 1953.

I also went to Victoria Infants School which was in the barracks, very close to the lower Peak Tram terminus. There was also a large red-brick Militart Prison near the Peak Tram, but it was demolished while we were living there. I remember the squaddies I talked to later as a teenager, who told me how terrified they were of ever being sent to the "Glass House", as all British Military prisons were nicknamed. The treatment to break a prisoner down was brutal, (as depicted in the Sean Connery movie, "The Hill"), but worse.

Flagstaff House was the residence of the Commander British Forces, and his car bore the number plate CBF.

I've tried to identify the warships in Davids photo. I've ignored Ship C as it's much smaller than the others, and isn't cloaked in gunsmoke, so may not be a man of war. David has already identified Ship E as HMS Tamar, so that leaves eight unidentified warships, Ships A, B, D and F to J. Here goes.

Around the time the photo was taken the China Mail regularly published lists entitled, "His Britannic Majesty's Ships on the China Station", giving details of British Royal Navy vessels based in and around China including Hong Kong. The lists for the nearest dates to 9-11-1901, the date of Davids photo, were published on 8 and 11-11-1901. In addition to HMS Tamar, the 8-11-1901 list names the following ships of over 3,000 tons (therefore big enough to be amongst the warships in the photo) as being "last reported in Hong Kong".

The 11-11-1901 list is identical, except that HMS Marathon is not mentioned. I haven't been able to trace her whereabouts on 9-11-1901 as neither the previous or subsequent editions of the newspaper mention her arrival in or departure from Hong Kong. In the absence of evidence that she was in Hong Kong on 9-11-1901, I'll assume she was elsewhere.

The China Mail of 11-11-1901 provides additional evidence that some of the ships listed as "last reported in Hong Kong" were actually in Hong Kong on 9-11-1901. On Page 4 is a list of attendees of a party on 9-11-1901 at Government House to celebrate the Kings birthday. Amongst those present were the Captains of Arethusa, Argonaut, Astraea, Aurora, Barfleur and Blenheim, meaning that only the Captains of Albion, Endymion and Ocean missed the event. Presumably someone had to mind the shop whilst the others attended the party.

Fortunately there are photos and a varying degree of information on the web for each of the ships named above.

photo and plan at; http://www.battleships-cruisers.co.uk/orlando_class.htm

Possibly the easiest of the above ships to distinguish from the others is HMS Argonaut, as she was the only one with four funnels. As no four funneled vessel is seen in Davids photo, Argonaut is obviously not in it. The Hong Kong Daily of 11-11-1901 explains why. On Page 6 it reports that Argonaut had been in Kowloon Docks on 8-11-1901, while at Page 4 it mentions that she had come out of dock on 10-11-1901 having undergone repairs.

Also easily distinguishable from the rest is HMS Arethusa, as she was the only one with three masts. In Davids photo only Ship A has three masts. As Ship A also looks similar to Arethusa in other aspects I think it's safe to conclude that Ship A is HMS Arethusa.

Another visually distinctive ship was HMS Barfleur, as she was the only one whose two funnels were positioned next to each other across, rather than along, her axis. Only Ship H in Davids photo has that funnel arrangement, so I'll say Ship H is HMS Barfleur.

HMS's Albion and Ocean were sister-ships, both being Canopus Class Battleships. Ships of this Class were visually distinctive due to another peculiar funnel arrangement. The Canopus Class Battleships had two funnels, the forward one being the normal circular shape, but the rear one being oblong with rounded ends, with the axis of the oblong running across the ship. When viewed from a forward angle, the rear funnel is seen to be wider than the front funnel. In Davids photo only Ship I shows this characteristic, so Ship I is either HMS Albion or HMS Ocean.

Ships G's funnels are obscured by gunsmoke, but the whole of her rear and the upper part of her forward mast are visible. Each mast has two cross-beams ( I don't know the nautical term) with a crows nest like structure just above the lower one. The rear mast has an additional, larger, crows nest between the lowest cross-beam and the deck. Of the warships not yet accounted for, namely Albion or Ocean, Astraea, Aurora, Blenheim and Endymion, only Albion and Ocean have two cross beams and two crows nests on each mast. Therefore Ship G should be HMS Albion or HMS Ocean.

Considering the conclusions in the last two paragraphs together, Ships I and G should be HMS's Albion and Ocean, but I don't know which is which.

From the online photos of the remaining ships, Astraea, Aurora, Blenheim and Endymion, only Aurora had single, large, crows nest type structures on both her lower masts. Ships B and F in Davids photo don't have such features, and the image of Ship D is not clear enough to see. Although only the fore mast of Ship J is visable, it does have a crows nest in the approximate size and position. I'll say Ship J is possibly HMS Aurora.

That leaves Astraea, Blenheim and Endymion unaccounted for. At 320 feet in length, Astraea was significantly shorter than either Blenheim (375 feet) or Endymion (387 feet). I find it difficult to say if any of the remaining ships in the photo, Ships B, D or F, are smaller than the other two. If pushed, I'd say B is the shortest, leading to the conclusion that Ship B is possibly HMS Astraea.

That leaves Ships D and F to be HMS's Blenheim and Endymion, but I can't distinguish between them.

An issue I've been unable to resolve concerns the flags of the Flag Officers of the fleet. To my understanding, officers of the rank of Rear Admiral and above have the right to "fly their flag", basically a white ensign, from the top of the fore mast of their designated flagship, hence the name.

"Rear Admiral Harry P. Grenfell, CMG, who succeeds Sir James Bruce as second in command in China, arrived here yesterday by the P&O mail steamer Ballaarat. About 5pm Admiral Grenfell went on board the flagship Barfleur (i.e. Bruce's flagship), being saluted en route by the men-of-war lying in the harbour, and was there entertained to dinner. The Admiral will hoist his flag on HMS Albion."

Further confirmation that there were two Flag Officers in town on 9-11-1901 again comes from the China Mail of 11-11-1901, which reported that both Bruce and Grenfell attended the party at Government House on 9-11-1901 marking the Kings birthday.

Ignoring the issue of the flags, I've concluded the following;

Many of the identifications suggested above are very speculative and I wouldn't be surprised if some are wrong. Grateful for any corrections, for clarrification on the matter of the Flagships, and any information anyone has on the whereabouts of HMS Marathon on 9-11-1901.

Thanks GW, some careful

Thanks GW, some careful detective work there. I know almost nothing about ships, so hopefully some more knowledgeable readers can add to your findings.