A house named “The Castle” was erected on Inland Lot 577 at Castle Road in 1868 (i.e. after the naming of the road).  This large residence was then owned by Charles May, who became the first Police Magistrate in 1871 and in 1879 became a member of the Legislative Council. 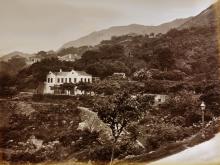 At last Friday's RAS talk, one of the audience asked for any information about The Castle, but noone had anything to offer. Here's what we know, which isn't much!

We've also got a couple of residents' names:

Can anyone add any more information about the place? eg who built it, and how it got its name?

More about The Castle

The footnotes are almost as interesting, as they point to some new sources for checking old building information:

Charles May was in the

Charles May was in the position of Superintendent of Police from 1845 - 1862.  Charles May never sat on the Executive council.

So many bits of information - so hard to decipher.

The 1863 map shows Castle Steps and Castle Road. I can't think they'd be given that name without some 'Castle' landmark nearby, so I'm guessing there was another building here pre-May.

I also note the name still in use at a couple of other places n the area. There's a 'Castle Lane' running up the hill along the southeast side of Ho Kom Tong hall, and off that lane there are buildings named 'Castle Villa', and a 'Castle Tower'.

Douglas Castle in Pok Fu Lam was built in 1863.  Would that have been a road that took you out there via what was Robinson Road.  What does the 1863 map show?

Castle Road isn't on the route to Douglas Castle (you'd be going up the hill to Robinson Road, then back down to Bonham Road and Pok Fu Lam Rd - quicker to just go along Queen's Rd then up Pok Fu Lam Rd), so I doubt that's the reason for the name.

Certainly a coincidence though, so there may still be a connection. Could he have had a house named Douglas Castle in this part of town before moving out to the "new" Douglas Castle in Pok Fu Lam? Or maybe it's just that "Castle" was in fashion as a House name around that time?

The death occurred at his home Bucknell Manor Bicester on October 1, of Mr. Anthony Babington a former resident of Hong kong. The late Mr. Babington was one of the older generation of residents, and at the time of his death was 69 years of age. The end came suddenly from, heart failure. He was the youngest son of a distinguished father, Lieutenant. Colonel W. Babington of the 7th Hussars and came out the East in his early twenties, serving in Japan for some time before settling down in Hong kong. Mr. Anthony Babington first arrived in China in the Eighties and was was for some time connected with National Bank of China being for several years thereafter manager of this Bunk's branch in Yokohama. About the year 1892 he joined Messrs. Shewan, Tomes and Company in Hongkong and retired in 1910 when he went home to England. The deceased was a very keen polo player, and was also popular in social circles besides doing a great deal of entertaining himself. He married after leaving China, and settled down in Bicester. He is survived by his widow. In Hongkong the late Mr. Babington made his residence at the at Castle in Caine Road, and it is interesting to note that Babington Path, which is close by, was named after him.

On the 1845 Map there is a Police Station here; its possible that "The Castle" was named after it. In 1843 the numerous bandits who inhabited the hills above the Upper Bazaar were responsible for many robberies so a police station was constructed in the vicinity to discourage them. 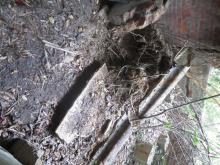