This was one of the places that civilians were interred in early 1942, before they were moved to the Stanley Camp. I've made a guess at its location on Des Voeux Road based on the notes below, but if you know the address please leave a comment below.

Notes by email from Barbara Anslow:

The Tai Koon Hotel was on Des Voeux Road, towards the western end, near the then Central Market.    I never knew its number, it was on the opposite side of Des Voeux Road to where Sincere's and Wing On large shops were.   There were 4 floors.   When we ARP folk were sent there on 4th Jan, we were directed to occupy the 2nd and 4th floors for some reason, and had a tiny cubicle each.  A week or so later the Japs sent another load of internees to our hotel, as a result we had to squeeze up - two persons to a cubicle sharing the only bed.

As you probably know, several other Chinese hotels also housed internees. I have a little photo (from a newspaper) showing the outside of one of the hotels, don't know if it is the Tai Koon but it is very similar. The heading is:-
'The gaol where Americans and other prisoners were housed in Hong Kong.'
I don't think it is clear enough to scan - I don't remember where I got the photo.

Excerpt from the book "Fetters Fall" by John Bechtel:

The route followed by the "enemy aliens" had led past the Central Market, the Hong Kong Fire Brigade Building, and now their column had come to a stand-still immediately in front of a dreary-looking, red-brick, five-story structure, from the second veranda of which hung a large, red sign. two Chinese characters occupied the bigger portion of the signboard, but immediately above them were their transliteration - "TA KWAN"; and at the bottom of the sign was the English word - HOTEL.

"I wonder why the column is stopping here?" Lester merely voiced aloud thoughts of all.

" 'Ta Kwan Hotel.' Hotel! What a Hotel! You don't suppose that they are planning to house all of these white women and children in a place like this?" Donald shook his head, as if it were ridiculous to even entertain such a thought.

"Donald, the Japanese officer is directing the leaders into the building."

"And look, there are white people up on the verandas now..." Alma made this startling discovery.

Lester called Donald aside and whispered something into his ear. The color was drained from Donald's face. "No. It couldn't be!"

Just one of the group immediately in front of the Addesons and Chapmans declared, with a laugh of scorn: " 'Ta Kwan Hotel' - Why it's not a hotel, it's a brothel. A Chinese brothel!'

A wave of indignation swept the length of the line. With all of the European-styled hotels in Hong kong, why was it necessary to confine them in a building of such disreputable character?

They stumbled up the narrow, gloomy, dusty, dirty staircase, and were greeted on the first landing by one of the Hotel "boys", who blocked their entrance into the dark hole of an opening, which served as a door, and pointed up. "No have got room. All full up. Must go higher one storey." 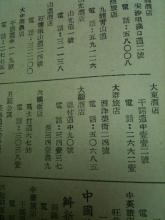 During my visit to Barbara Anslow on the 2nd of this month, she was so kind to show me the photo from a newspaper showing the outside of one of the hotels which housed the internees.  The name of the hotel on the photo is legible - Xin Hua Hotel (Mandarin pronounciation) or Sun Wah Hotel (Cantonese pronounciation).  So even though it was not Tai Koon, it gives us a very good idea of how such hotels looked like!

I've added a Place for the

Today I had the opportunity to meet HK history writer Mr Cheng Po Hung and asked him about Tai Koon Hotel, amongst other stuff.  He could pinpoint it at 90, Des Voeux Road (currently Central 88), based on the Chinese name 大觀酒店 in the Hong Kong Year Book Volume 4 (1951) published by Wah Kiu Yat Pao (http://hkclweb.hkpl.gov.hk/hkclr2/internet/cht/html/frm-bas_srch.html).  I have browsed through the entire hotel list and could not find another hotel with a similar Chinese pronounciation.  As such, I believe that the location of Tai Koon Hotel indicated in the map above should be changed.

Furthermore, Mr Cheng also advised that the building of the Tai Koon Hotel was previously the first-generation P&O Building.  The street at the back of the current Central 88 is still named Tit Hong Lane (鐵行里), which means P&O Lane. 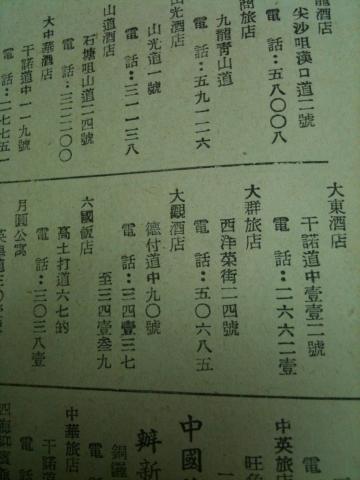 Thanks CM, that location is a better match for Barbara's description of the location. I've updated the marker.

Please pass on my thanks to Mr Cheng too. I've really enjoyed reading his illustrated history books of Hong Kong.