The Wesleyan Chapel, No. 127 Wellington Street, has been licensed as a place for the celebration of marriages.

The history of this Church began in 1885 when an application for a Wesleyan Chapel for sailors and soldiers were submitted.

The chapel was officially opened on Sunday, May 20th 1893 - the beginning of the English Methodist Church, also known as the Garrison Church, or the Military Chapel.

Wesleyan Chapel (IL 1316) Accepting the site offered by Govenment for the erection of 21.11.1892  (Public Records Office)

A small Wesleyan chapel stands at the junction of Queen's Road and Kennedy Road. 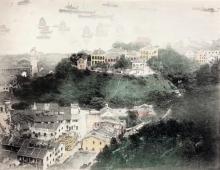 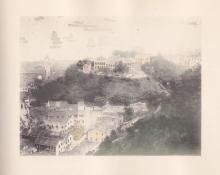 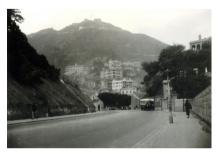 More info from the church itself

As demolition of the second-generation church is getting underway, I stumbled on a little more info here:

Nutshell view -- the second-generation church opened in 1965, so a 1964 demolition of the original building sounds right, although no date is specifically confirmed.

There are two excellent, high-resolution images of the first-generation church in the same document linked above, showing it both inside and out. Given that the building was likely demolished only 50 years ago, and copyright term for artistic works in Hong Kong is life plus 50 years, I'm not including them here.

re: More info from the church itself

The link in the above comment no longer works, but Revd Dr G Howard Mellor has kindly sent me a soft copy of the booklet and permission to include excerpts here. The booklet was produced in 2013 to celebrate the 120th anniversary of the Methodist international Church.

The land for an erection of a Wesleyan Methodist Chapel and Ministers Manse was eventually given in 1892. It was signed off by the Governor on the 25th December of that year, with a lease of 999 years at one dollar per annum. The Church was opened on Pentecost Sunday, 20 May 1893. The Revd William Musson was the appointed minister and he served for six years.

The chapel seated 300 and in torrential rain the opening services were conducted by the Revd Charles Bone, since Wenyon was travelling through China to England working on his book. The building cost ₤514 11s 6d of which the MMS paid ₤300. This Garrison Church served not only the army and navy personnel but also a few civilians and missionaries on furlough or travelling to China. From the beginning, the Church was known as The English Methodist Church.

Over time the change of name of the church has mirrored the church’s understanding of its mission. First of all this was the English Methodist Church, also known as the Garrison Church, serving servicemen. Then as the number of civil servants increased, the new church in the 1960s was known as the Methodist Church (English Speaking), acknowledging that there were, by now, many other Methodist Churches in Hong Kong. In 2006 the church, acknowledging the change in Hong Kong of 1997, wisely changed its name to the Methodist International Church Hong Kong through a decision made in the Conference. Today we say that we have in our congregation people from every continent and many nations.

Redevelopment in the 60s and 70s

The need to expand the 1893 premises had been a growing realisation. The original building was a ‘low lying but grand old building in Chinese style’ with its main entrance in Queen’s Road East, a kind of porch with two rooms off to the side which were used by the Sunday School, and then the main body of the church. The windows along the side were relatively tall and narrow and carried heavy shutters for use in the event of a typhoon. A door behind the pulpit led to a small courtyard and the caretaker’s flat.

Originally the church had a number of large hanging, swinging fans, fixed to the ceiling, called ‘punkahs’ which were pulled by people outside the building by means of a rope from side to side to create cooling air in the building during the hot weather. Eventually electric fans were installed.

In the 1960s Cyril Clarke indicated that ‘This Church is not, and has never been, wealthy.’ He noted that the British Methodist Church had assisted the church financially, though after 1946 it had become self-supporting, ‘though only just’. The cost of the new church at that time was estimated to be HK$250,000, and this was clearly a significant amount. The Revd Cyril Clarke oversaw the final preparations for the demolition and rebuilding. The new building was completed in 1965 to fanfares in the community of Hong Kong.

Extracts from "The History of the Wesleyan Missionary Society"

I've put together the following extracts from "The History of the Wesleyan Missionary Society" in which the missionaries resident in Hong Kong, Dr Wenyon, the Rev Musson and the Rev Charles Bone, are mentioned, as well as Dr Webb Anderson, who came in and out of Hong Kong. Estimated dates are inserted in square brackets. Otherwise the text is as published.

“Passing on to the close of the following decade in 1903, we find Dr. W. J. Webb Anderson in Dr. Wenyon’s hospital at Fatshan. Parker and Hargreaves had both returned to England, and to fill the three vacancies the Revs. Edgar Dewstoe, C. A. Gaff, and Thomas Robinson had joined the staff. H. E. Anderson was acting under the direction of the Chairman of the District, the Rev. C. Bone, both being stationed at Hong Kong. There were thus nine Missionaries on the staff as compared with eight in 1880, but two of these resided at Hong Kong, and another, S. G. Tope, was on furlough, so that while the important additions of two hospitals had been made, and the North River Mission and the Kwang Si Mission had been taken up, as well as the work in Hong Kong, the net increase to the staff amounted to a single Missionary.(…) In 1903 William Bridie wrote strongly, pointing out the serious consequences of being thus understaffed.(…) In 1893 the Wesleyan Mission was numerically the strongest of all the Churches at work in South China ; in 1903 our place was the lowest of all (…)those years, so critical for the Church in China, were precisely those in which missionary enthusiasm in England was at a low point.

In 1894 the Rev. W. Musson was appointed to Hong Kong, and from that time the work, both among the Chinese and the soldiers, was put on a better footing. With the development of naval and commercial interests there was a large increase in the Chinese population, and the census of 1896 showed that there were two hundred and thirty thousand on the island. These were quick to see the advantage of education, and in 1897 there were more children in our Hong Kong schools than there were in all the other Wesleyan schools in China. (…) Musson was followed by the Rev. Charles Bone in 1900, by which time a suitable site for a soldiers and sailors home had been secured. The home was opened in 1901. Only those who realize the moral atmosphere of the East will understand the value of such an institution. Many an English lad has been brought to Christ in the Hong Kong home, and has found his faith to be also his. (…) Bone was still in Hong Kong when the Centenary year came. Under his wise and loving care the two branches of the work developed, until in 1913 there were eighty-two members on the English side and one hundred and ninety-two on the hinese.(…) Early in the new century the Fatshan Circuit was divided, and the pastoral care of the new section the Man Cheung Sha Circuit was put under the oversight of Dr. Webb Anderson, who thus added no slight burden to that which he was already carrying in the hospital.(…) The murder of Dr. Roderick Macdonald was a terrible blow to a Church which was at last beginning to move rapidly to its goal. The consequence in Fatshan was that Dr. Webb Anderson was left alone in that city to carry on both his work in the hospital and the general administration of the Church. A further disaster followed in the form of a terrible flood, which brought death into many homes. Altogether 1907 was a sad and difficult year for the Missionary at work in the Canton District. (…)

The Chairman, the Rev. Charles Bone, resided at Hong Kong, and with the exception of a few months spent on furlough was the sole administrator of the Church during the period. [1907-11] The medical staff was particularly strong. Drs. Webb Anderson and Philip Rees were able to continue at work, carrying most of the time an excessive burden, and in the course of the period under review they were joined by Drs. A. W. Hooker, B. R. Vickers, W. B. Walmsley, R. P. Hadden, and P. V. Early. Other Missionaries who joined the staff were R. Ellison (1906), A. A. Baker (1910), J. R. Temple (1911), and C. C. Marris (1913), while E. Dewstoe, S. G. Tope, C. A. Gaff, T. W. Scholes, H. E. Anderson, R. Hutchinson, and T. Robinson, who were already on the field in 1906, maintained a service unbroken except for furloughs.(…)

To return to Fatshan. Dr. W. J. Webb Anderson came to the relief of a sadly overworked staff in 1900, and steps were soon taken to build a new hospital. The one which had done duty up to that time was admirably placed so far as centrality was concerned, and it continued to be used as a dispensary. But its surroundings were far from hygienic, and for the purposes of a hospital it was necessary to seek a cleaner locality. In 1905 Dr. Dansey Smith took the place of Dr.Webb Anderson, whose health necessitated a furlough, and shortly after he was joined by Dr. Philip Rees (…) In 1908 Dr. Webb Anderson, who had returned from furlough, was joined by Dr. Alfred Hooker at Fatshan, and in the same year the new hospital was opened, a grant of five hundred pounds from the Twentieth Century Fund being a great relief to the Missionaries in their financial embarrassments. The old hospital continued to be used as a dispensary, and was ably served by Dr. So Kit San. The greater part of the cost of the new hospital was received from Chinese sources, an indication of the appreciation of those who knew its value, and the current charges are also fully met by the income from fees, the poorer patients being treated gratuitously. In the Centenary year [1907] Dr. Webb Anderson was still in charge of this hospital, and its range and efficiency continually increased. During that year more than nine thousand patients were treated within its walls, and the number of out-patients made a demand upon the staff which, great as it was, they were only too happy to meet.(…) It is interesting to note that in the Centenary year the number of Church members in Fatshan stood at two hundred and ninety. When Dr. Wenyon began work in that city there were only three Chinese Christians within its walls.” 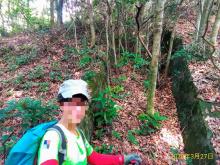