(rented by the Governor for a few years in the 1890s because Mountain Lodge was not habitable.) 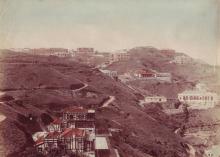 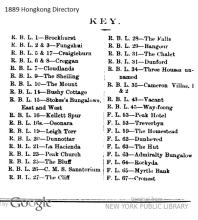 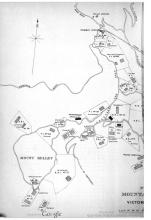 Google's satellite view shows the previous building has been demolished. Time for a new one!

It's possible that Craigieburn was once the residence of David Robert Crawford, the brother of Ninian Crawford. Ninian Crawford co-founded Lane Crawford but it was David Robert Crawford who ran it for many years. The Daily Press in June 1887 mentions an auction at Craigieburn and says it's the residence of D.R. Crawford. When D.R. Crawford's son Frank died in October 1939, he was living in Hatfield, in Hertfordshire; but he'd called his house Craigieburn.

The 1887 Peak Directory lists Mr D R Crawford living at Craigieburn, and the 1887 Ladies Directory shows that Miss D Crawford, Mrs D R Crawford, and another "Miss Crawford" without any initial were also living there.

This photo was posted on Eternal1966e's site on Flickr entitled "1880s Government House".

It's Craigieburn, one of the houses on The Peak rented as a summer residence for The Governor in the years between Mountain Lodge 1st Generation (www.gwulo.com/node/12634) becoming untenable and Mountain Lodge 2nd Generation (www.com/node/4704) being built. It can also be seen in this earlier photo where it's the white bungalow just above and to the left of centre.

It's also in this pic where its the white bungalow immediately below Mountain View - the red terrace of houses on the ridgeline in the top left corner.

Here's a timeline of its early history.

1891 - Governor Sir William ROBINSON moved in. The year may not be exact as it is taken from ROBONSON's statement on 17-7-1893 that he had "two years experience" of living in Craigieburn. The full quotation shows he wasn't very happy there;

"I can certainly from two years experience fully confirm what Mr. BELILIOS has said to the effect that Craigieburn is utterly inadequate not only for entertainment but for ordinary household and domestic accommodation". For a staff of 40 "servants, boys and coolies...the space is far too limited for entertaining and it is certainly quite impossible to put up Archdukes, foreign Admirals and the numerous distinguished visitors who are constantly in this colony".

1893 - Governor ROBINSON in Craigieburn, see statement in 1891 entry above.

1897 - Craigieburn on list of "Government Houses" and described as "Temporary residence pending the reconstruction of Mountain Lodge. 4 entertainment rooms, 8 bedrooms, coolie quarters detached from the house, heating by coal fire, lighted by gas, no land, a small garden and two tennis courts...a hill residence occupied during the summer months".

From the above, Craigieburn was used as the Governor's Summer Residence from about 1891 to 1898.

Returning to the photo at the top of this post, it was probably taken later than the 1880s date claimed on Flickr. One indicator is that Mountain View, constructed in about 1889-1892, can be seen. Secondly, the photo is captioned, "Goverment House" and the Union Jack is flying suggesting that it was taken during the Governors residency. If so, it was taken between about 1891 and 1898.

"Craigieburn Hotel" is given as an address for at least one person in each of these Jurors Lists:

There may be later years too, but we've only got as far as putting 1920 online so far. Here's the search I used: http://gwulo.com/search/node/%22craigieburn%20hotel%22

Further to the discussion on when Craigieburn was first used as a hotel.

On Page 1 of The HK Telegraph of 31st May 1898 appears an advert for the Peak Hotel. Within the advert it says, "Craigieburn will be open on June 1st, for terms apply to the Manager, Peak Hotel". The equivalent advert in the next days newspaper says, "Craigieburn is now open".

Perhaps Craigieburn opened as a seperate hotel on that date, or maybe the absence of the word "Hotel" from its name, and the fact that it was jointly advertised with and apparently managed by the nearby Peak Hotel indicates it was operated as an extension or annex of The Peak Hotel.

A random pick of the old newspapers shows that similar joint adverts continued to be used until 2nd April 1900 when a new advert appeared in the HK Telegraph - now its "Craigieburn Hotel" and The Peak Hotel doesn't get a mention. I don't know whether the addition of the word "Hotel" and change of the advertisement signified any change in reality.

The initial post in this string says that a 5 storey building was erected on the Craigieburn site, and mentions the dates 1920 - 1935. This photo shows the building, albeit at a distance.

It's just above the centre of the photo. Counting the number of floors by the windows gives a total of 6, so I suppose the lowest was thought of as a basement. As the photo was taken post war, the 1935 date quoted above can't represent the demolition date.

The Story of Government House by Mattock and Cheshire mentions "In 1897, what remained of Mountain Lodge was pulled down. The lease on Craigieburn expired and one was taken from January 1898 on 'The Cliffs', a four-bedroom house owned by Chater further down Plantation Road".

Continuing the timeline for Craigieburn given in the post of 2016-06-12 above.

1922 - Up to 1921 the Jury Lists included jurors who gave their addresses as "Craigieburn", but from 1922 the name disappeared from the Lists with jurors using the address only, i.e. 37 The Peak.

1937 - Para.36 of the 1937 PWD Report tells us of the completion of a new building of "European type flats, "Hill Crest", The Peak". Subsequent sources show "Hill Crest" or "Hillcrest" on the old Craigieburn site.

To summarize, the original Craigieburn building continued to be used as a hotel up until at least 26-4-1921. Thereafter, the "Craigieburn" name ceased to be used, but people still resided in the building, referring to it by its address - 37 The Peak. Perhaps it had stopped functioning as a hotel, but long term tenants still rented rooms? In 1925 the old building was renamed "Hillcrest" or "Hill Crest". It was eventually demolished to make way for a new building of the same name completed in 1937.

Corrections and additions are most welcome.

Thanks for all the

Thanks for all the investigations. Does c.1885-c.1935 sound alright for the dates?

Yes, those dates are the best we can do at the moment.