According to The China Mail of April 17, 1876 (p.2), the Temperance Hall was first opened on Stanley Street that month. The location marked above looks an unlikely spot, being in the middle of the old Tavern District.

Pub with no beer

Never mind the district. The manager, John Olson, held a liquor license for the Stag Hotel and was also manager of the Temperance Hall. He'd held a licence since 1867 or thereabouts and made his money from selling booze.

Any ideas of what he was up to very welcome. Does anybody know who owned the Temperance Hall because he hardly did. More likely a church or missionary society.

The Temperance Hall had accommodation for about 20 people, so someone with hotel experience would have been useful to manage the place.

"In China, the Rev. E. C. Bridgman, D. d., is Secretary of the Hong Kong Temperance Union.  and there is hope that the total abstinence principle will yet save the Chinese from the desolations both of alcohol and opium."

Temperance Halls - which sold non-alcoholic drinks - were put in the bar district on purpose to give alcoholics and others who had "taken the pledge" not to drink liquor, an alternative to going into bars.

"Another institution of the year 1873 was the opening of the first Good Templars' Lodge in Hongkong (September 25, 1873), which was followed by a steady spread of the Temperance movement in the Colony and led evventually to the opening of a Temperance Hall in Stanley Street (April 17, 1876), subsequently removed to Queen's Road East."

Mention of need for Temperance Halls in Hong Kong press?

Is there any parallel in the Hong Kong press of the following 1879 editorial calling for a Seamen’s home in two Nagasaki newspapers?

Nagasaki is acquiring a bad name, at least among men-of-war, and it would seem  to be shunned as a winter resort for the simple reason that while numberless inducements  and temptations are offered to the sailor on shore to drink, and that too often to  excess, there is not one solitary house where the temperate man or the tee totaler can  drop in and read the paper without the noisy accompaniments of drunken singing or angry  brawls...

The call was answered by the Rev Andrews who opened a ‘Reading and Coffee Room for Sailors’ and then the Rev Hutchinson, who repaired the building and named it ‘The Sailors’ Institute.’ When Hutchinson was posted to Fukuoka in 1889 a recently arrived English couple, Alexander Air and his wife agreed to buy the building and operate it as "a Temperance Hall, combining with accommodations for sailors a Boarding House available for visitors...." While Air catered for teetotal sailors, his wife let out rooms at the same address to other teetotal visitors to the city.

Info from Lane R. Earns Like a Lighthouse on a Stormy Night: the Seamen’s home of Nagasaki

The Airs’ venture was short-lived, but I’m interested that my great-grandfather John Olson decided to provide a dry alternative for sailors with his wife. I wonder if there is a record of how long their Temperance Hall venture at 1 Ladder Street Terrace, dated in JO’s Jury list entry as1888, lasted? I’m curious as to whether 1 Ladder Street Terrace, sited I believe, on vertiginous steps, http://www.panoramio.com/photo/34609809 could have accommodated 20ish people as well as the substantial Olson family. My grandfather, Charles Warren, was living at this address with his wife and first child eleven years later. It seems that his parents-in-law had moved back to the Stag Hotel by 1891, which they were already running.

John Olson and the Temperance Hall

In regard to the last post I have all the birth certificates of my great grandfather's children and the last two, Ellen and Charles ,were born in 1886 and 1888  at 1 Ladder Street.

The 1886 Certificate for Ellen Kirsten however records her birth at 1 Ladder Street Terrace but under  "Rank or Profession"  John Olson describes himself as a Landowner.

As my grandfather had been involved for many years in the tavern trade and during this period seems also to have been involved with the Stag Hotel there is a little bit of a mystery here.

It seems to me that John described himself the as the mood or circumstance took him. I have birth cert documentation showing him to be a Farm Keeper, a Hotel Keeper (twice) a Temperance Hall Manager and a Landowner. We know he held a licence to sell liquor from the late 1860s onwards from the Jury Lists and we also know that he seems to have left the "hospitality" industry around 1892 when he divested himself of the Stag hotel.

As we never discovered why John does not appear in the Jury lists after about 1885 it is hard to track him and his activities.

Perhaps it was common practice for individuals to describe themselves as they saw fit back then. Certainly his son in law C.E.Warren added architect at one stage to the business he ran with my grandfather, who was also named John.  As I recall it they were both described as building contractors in some Jury lists.

Finally, the last post seems incorrect as it is not possible that Charles Warren lived there with his wife, my great aunt Hannah, and their first child as they did not get married until about 1899 and their first child was born in August 1900 long after John had left Ladder Street. Whatever he was doing there!

It is my understanding that The South China Ladies’ Directory of 1904 shows a Mrs Olson (she was actually Ching Ah Fung) at 33 Caine Road, a Miss L.Olson (daughter Elizabeth) and a Mrs C.E. Warren (step-daughter Hannah) also at the house. The family later moved to 52 Caine Road according to the same source. Perhaps because it was a larger house.

I believe John Olson was many many thing to many many people and has left us a mystery which we will not solve.

At the risk of being boring to some regulars, as full account as I have managed to put together of my great grandfather's life, can be found at www.thehongkonglegacy.com I would be delighted to hear from anybody who has useful information to add.

re: Mention of need for Temperance Halls in Hong Kong press?

The 1876 clipping shown above has some similarities. Do the online newspapers or Google Books have any other useful references? As well as temperance try searching for tavern.

I've made a new Place for 1, Ladder Street Terrace.

Thanks David. I have to admit that I relied on Sean's reference to our great-grandfather being Manager of a Temperance Hall at 1 Ladder Street as coming from the 1888 Jurors' List. I'm sure he would have double-checked this before publication. I see that the 1888 list published here is for Special Jurors. Maybe our great-grandfather was an Ordinary Juror. Is there a separate list? Yes, Lim's section, 'Seamen', is even more evocative than on tavern keepers. I have somewhere read about the general noise level at night being pretty unbearable, but in an article that I can't now locate. I was hoping that someone might be able to point out a Hong Kong article contemporary with and similar to the Nagasaki complaints. If so, I'd be very grateful. It certainly seems like a good idea to offset a tavern with a Temperance Hall - a bit like 'smoking' and 'non-smoking' carriages, but perhaps the Temperance venture wasn't popular  after all. I have documentary evidence for Charles Warren residing at this address at the end of the century. If his parents-in-law had moved on, it seems to  have been a kind gesture to the young couple to let them live there, and if it really had offered 'temperance' accommodation in the past, there must have been a lot of space. From the Panoramio photo, the building seems to be tall and on the corner.

Just read your last. I spent a great deal of time searching for Temperance Hall mentions in various areas from Carl Smith to Google and got nowhere.

The evidence for it being at 1 Ladder Street is, in retrospect, slim. I took it from the birth certificate of my great uncle Charles in which John describes himself as "Manager Temperance Hall" and gives the above address under the heading: Signature,description and residence of informant

That was in February, 1888. The other certificate for my great aunt Ellen Kirsten which uses the same address is May,1886.

Therefore, it looks as if I probably got it wrong by assuming that the Hall was at the same address. I should have thought more carefully as the explanation as to why John calls himself a Landowner in Ellen Kirsten's birth cert. Perhaps 1 Ladder Street was just their home.

I have always assumed that the family lived above the premises so to speak until the reference in the 1904 South China Ladies Directory shows them living at 33 Caine Road.

All the other certificates give Queen's Road Central as John's address. This includes Hannah Mabel his first living child who he had with a Yau Kum (May, 1880). The certificates for Elizabeth (August, 1882) and John (May, 1884) show Queen's Road Central as John's address which was the National Tavern. All the other children were with Ching Ah Fung who is buried as Ellen Olson in Happy Valley as you know.

It looks as if my assumption has caused many hours of fruitless search and not only by me. Apologies.

PS: Still does not answer why a tavern keeper or hotel keeper of about 20 years experience, and who was involved at the same time in the Stag Hotel, was doing managing a Temperance Hall? Answers on a postcard please.

Jill, just scroll down that document a couple of pages, and after the special jurors you'll find the list of common jurors.

Sean, no problem. It's good that we can still add something new to the story after all this time.

Chasing down Temperance Hall, I think it owed its existence to the Hong Kong Temperance Society that seems to have been founded sometime before 1864 (perhaps following the founding of the Church of England Temperance Society in 1862 - see story in HK Daily Press, 12.9.1864). One of its early lights was the Rev Irwin (Colonial Chaplain 1856-1865 and also one of two clerical motivators for the founding of the Sailors' Home Trustees in 1861). It would seem to have lasted for just under 12 years - it disappears from the Blue Book in 1888 - and to have had some problems with staff. There were six managers in the 12 years. Using the jury/juror lists, John Mackay is given as manager for 1877. There is no name for 1877 and 1878. From 1880 to 1883 the manager was Edmund Shillibeer and at some time before 1883 it moved from Stanley Street to Queen's Road East. In 1884 the manager was a Nelson Pugh, and in 1885 Uriah William Harris. No name is given for 1886, but in 1887 the manager was John MacDougall. John Olson is the last manager in 1888 at which point, I suspect, the outfit folded. Between 1881 and c.1886, at 5 Hing Heen (probably Heung Hing) Lane in Sai Ying Pun, a 'dry' Seamen's Shelter was being run by an American (I think) called Charles Bunker, so maybe two operations were more than the 'maritime temperance' market could baar. This may have created the gap into which, in 1893, the Missions to Seamen's "Star" Seamen's Coffee house moved. 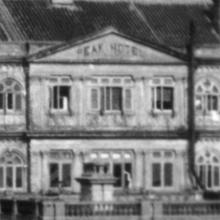