More than 1001 Days and Nights of Hong Kong Internment. A Personal Narrative.

This book is a lightly edited copy of Grenville Alabaster's journal, which in turn was based on his diaries covering the Japanese invasion of Hong Kong in December 1941, the years of internment in Prince’s Building and Stanley Camp that followed, and the eventual liberation in 1945. We have several journals from that period available to read here on Gwulo, and recent years have seen a steady flow of other diaries and journals being published, so what makes Alabaster's worth your attention?

To give a rough idea of what to expect, here’s how the text is divided among the different topics:

The first item that stands out is the large section covering his internment in Prince's Building in early 1942. Other internees spent a couple of weeks in the brothel-hotels near the waterfront, then moved into Stanley Camp in late January. Alabaster, along with several other senior members of Hong Kong’s government, spent that time in Prince’s Building, not moving into Stanley until March. This is the first account I’ve read of this group.  Alabaster describes their many interactions with the Japanese, who come across as more sympathetic that I’d expected. It’s a good reminder of the danger of lumping everyone into ‘the Japanese’ when there was a wide range of characters among that group. Alabaster makes clear his views on the main division, differentiating between 'the civilized heads of the Japanese Consulate on the one hand and the Gestapo-minded heads of the Gendarmerie on the other' (p.42).

Alabaster was Hong Kong’s Attorney General, which meant he ranked third in the hierarchy of the Hong Kong Government, below only the Governor (#1) and the Colonial Secretary (#2). His account gives a window into the problems they were dealing with, very different from the more mundane day-to-day problems we usually read about in other diaries from this period.

One of the problems the government group dealt with was partly caused by their late arrival into Stanley Camp. In the interim, the internees in the camp had set up a Communal Council to run the camp. The government group spent a great deal of effort to reassert their authority. This was especially true of Mr Gimson, the Colonial Secretary. Though he ranked second, he was effectively the leader of the government throughout the internment, as the Japanese had moved the Governor out of Hong Kong.  Alabaster describes the tensions in this entry from April 1942, not long after his arrival in Stanley Camp (p.104):

Mr. Gimson told me that he was having trouble with Nielson, the Chairman of the Communal Council, who considered himself the boss of the British and either unable or unwilling to confine his activities to the sphere of purely camp matters, which had apparently been accepted by the other Commissars. He kept interfering in external and official matters which were properly the concern of the Colonial Secretary. It was becoming more and more apparent that two kings could not rule in Israel.

So if you’re looking for larger historical themes, this book will be valuable if you’re interested in the Prince’s Building internment, negotiations with the Japanese during that time, the government's conflict with the Communal Council, and generally the activities of the senior government members.

History isn’t all about the big themes though. Books like this are also valuable if they have those smaller facts that fill in the gaps of our knowledge, answering questions raised in previous accounts. Alabaster is good at describing the events around him, so his journal will definitely fill in some of those gaps. Here are a couple of examples, with the first from page 36,

Rejoining the Colonial Secretary, we visited his official residence, which he had never occupied, for since his arrival in the Colony on the 7th December he had been a guest of Sir Mark Young at Government House until our capture there as already described.

We've seen other writers disagree on whether the Gimson first arrived on the 7th or 8th of December. Given Alabaster’s close relationship with Gimson, I'm happy to take this date of the 7th as the correct one.

As another example, we've previously wondered about the exact addresses of those brothel-hotels that many Europeans were sent to before Stanley Camp was ready. Page 46 has the answer:

My diary for Sunday, 11th January, 1942, gives a list of the Chinese hotels and boarding houses to which those who had gone to Murray Parade Ground to register on the 5th had been marched. These, according to the diary, were:

These dates and places are important, but there's also another strength to Alabaster's journal. I could quote many examples, but here's a good one, also from page 46:

At the university we saw Mrs. Daisy Turner and her daughter Mrs. Beryl Skipwith, also Mrs. George Tinson and Miss Peggy Sharp already mentioned in the earlier part of this narrative. I also saw Mrs. Caer Clarke, the widow of an architect who had died there a few days earlier. Among the throng the beautiful half-Russian, Miss Mitzi Glover, was pointed out to me.

Alabaster made a point of recording the different people he came into contact with, often with a word or two about their current situation. This is invaluable for descendants of the people who lived through Hong Kong's war years. Despite the increased number of diaries becoming available, many POWs and internees left no record of their experiences, and refused to talk about the subject when asked. Their children and other close relatives are always grateful to learn something of their experiences from mentions in diaries. This book is a good source of mentions as Alabaster came into contact with a wide range of people: as Attorney General he was often visited by people seeking legal advice, and as one of Hong Kong’s senior Freemasons he made a point of visiting the other Freemasons in camp.

Finally, how is the book to read? Among the various accounts on Gwulo, some are copies of original diaries, while others are accounts written at a later date. Diaries are typically written for an audience of one, and are often very terse, leaving out descriptions and details the author already knows. It can make them difficult for third party to read. On the other hand diary entries are written within days or hours of the events they describe, so they are very accurate, and they're often written without any expectation that a third-party will see them. For that reason diaries tend to give the unvarnished truth, even when it paints the writer or his subjects in a bad light. The later accounts lack that openness, and some of the accuracy, but can benefit from the writer having had years or even decades to think about the events, and paint us a broader picture.

Alabaster's journal is a good balance of the two. He based it on his diaries, so we have their immediacy and accuracy. The journal was written several years later though, so he also has the chance to flesh out those sections that need more detail, and add several pages giving us his thoughts on the pre-war conditions in Hong Kong and their effect on people's behaviour in Stanley Camp.

As you'd expect based on his profession, he writes very clearly, and is easy to read. So, all in all this is a very good addition to the records of life in wartime Hong Kong.

The readers wanting to know if their relatives are mentioned would benefit from an index of the names in the text. Maybe that could be added to a future edition, or it could be made available online instead - I'd be happy to host it here on Gwulo.

It would also be interesting to know if there are any major sections that didn't make it from the diaries into the journal, and again they could be made available online as a companion to the printed journal. 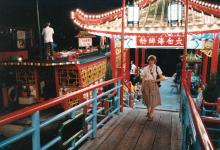