I've got another 'old Hong Kong waterworks' puzzle for this week's newsletter. Unlike the recent pouring pipe mystery, this one took much longer to solve. It all started around ten years ago, back in a time of tadpoles. 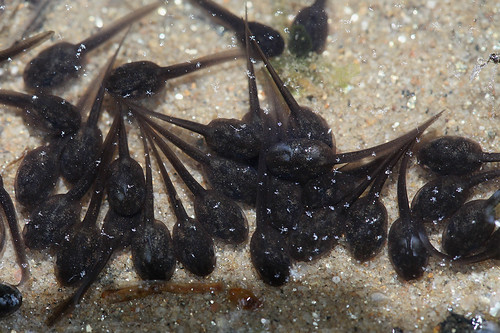 When our daughters were younger, an annual ritual each April / May was to go looking for tadpoles. We'd take a jam jar's worth home, enjoy watching them grow into baby toads, then take them back to their stream and let them go.

The path to the tadpoles passes these two old pillars, made from granite blocks and standing unused in the centre of the stream.

What were they built for?

A little further uphill the path crosses the Pokfulam Conduit, an aqueduct built in the 1870s to bring water from the Pokfulam Reservoir around to the city on the north of Hong Kong island. Thomas noted that an 1889 map shows "syphon wells" marked on the conduit near to the pillars' location. That was a good clue, but we moved to Kowloon not long after this and so for several years the pillars were 'out of sight out of mind'.

Until recently, when two different people nudged me to look again. First, Chris told me he'd seen a third pillar of the same design, not far from the two shown above. Then in February, Paul Zimmerman wrote on his website: 'Over Christmas and New Year’s we explored the Pok Fu Lam Conduit and found 16 of the original 32 aqueducts still largely intact bridging over ravines and gorges'.

On the map he supplied, two of the missing bridges would have crossed the streams where the pillars stand. So were the bridges, conduit, pillars and syphon wells somehow all connected?

What exactly are 'syphon wells'?

If you've ever had an aquarium, you've probably used a siphon to empty it. (I'll use the siphon-with-an-i spelling from here on, but it means the same thing as syphon.) Here's what a siphon looks like in action:

That's not what we're interested in, though. Instead we need to look at the inverted siphon, a U-shaped pipe.

If you're planning the route of an aqueduct and it meets a valley, you have two options to get the water across to the other side:

Here's how the two options look in practice:

I believe the 'wells' at the start and end of each inverted siphon were small tanks, possibly used to catch sediment so it didn't block the siphon's pipes. (If any engineers are reading who can tell us more about siphon wells, please let us know in the comments below.)

That's enough background information, let's go visit the pillars and see if we can put all these clues together.

This is where we're going to, the hillside above the Pokfulam Playground:

I've marked the route of the Pokfulam Conduit as a green line, and added the bridges from Paul's document. Bridges 22, 24, and 25 are old, granite bridges that date back to the 1870s when the conduit was built:

While Bridges 23 and 26 are much newer, made from concrete:

We'll start from the section of old Pokfulam Road that runs behind the basketball court, heading up the steps that run to the right of the stream.

This stream underwent some major works after I took the 2014 photo, so there's lots more concrete around now, but fortunately the pillars have survived.

After crossing the stream and climbing up more steps, you'll see a small seating area on your left. Look down to the right and you should see the pillars in the stream bed.

This time I got a better view of the distant pillar, which has an important clue for us, a shaped stone on top of it, with two wide, curved grooves cut into its top.

With that in mind, read this 1896 description of the conduit:

20. This conduit has a total length of 17,840 lineal feet and over the greater portion is constructed of brickwork and masonry, rectangular in section, being 1' 6" x 1' 6". Cast iron inverted syphons of an aggregate length of 2,206 lineal feet were used to cross five of the ravines, these consisted of two cast iron pipes 10 inches in diameter laid side by side. The discharging capacity of this conduit was 2,000,000 gallons a day until it reached syphon No. 4 where it was reduced to 1,700,000 gallons a day.

So I think these pillars supported the base of the first inverted siphon, with the two cast iron pipes resting in the channels on that shaped stone.

That led me back to the 1889 map that Thomas had mentioned.

I'd originally assumed this section was casually drawn as it was at the edge of the map, away from the city that was the map's focus. But overlaying it on the modern map it is in fact a pretty good fit.

The only bit that doesn't look quite right is how the line of Inverted Siphon 1 on the 1889 map doesn't match up very well with today's location of the pillars in the river. But maybe that's the 1889 map's mistake, as a later map from 1901 shows Inverted Siphon 1 was built with a kink instead of in a straight line, and then it fits the pillars' locations nicely.

So when the engineers designed the Pokfulam Conduit in the 1870s, they had the option to use bridges or inverted siphons to carry the conduit across any streams along its route. For most of the smaller streams they built bridges, but for five of the larger streams - including the two shown above - they used inverted siphons instead.

At some later date, new, concrete bridges were built to cross the larger streams, and the conduit was extended to run across those bridges. The inverted siphons were no longer needed, so their pipes and the siphon wells were removed. Only their supporting pillars still remain, stil standing where they were first erected over 140 years ago.

Based on all we've learned, this is my updated map of this section of the Pokfulam Conduit. The original route is marked in green, with dotted sections for the inverted siphons. The later extensions to the conduit are marked in blue.

As always, if you spot any mistakes, please let me know in the comments below.

Have any signs of the siphon wells survived?

I couldn't find any sort of tank where the siphon wells are shown on the map, but I did find clear evidence of the wells' locations.

The conduit was a lined channel, covered with granite slabs. Today the conduit is used as a popular footpath, and if you walk along it you'll see you're walking on top of those old slabs, with the water channel out of sight beneath them.

The above photo was taken as I walked back from Bridge 22. Look how the path changes as the conduit turns the corner, passing the location of Siphon Well 1.

The wider, granite slabs come to an end about where the conduit would have run into the siphon well. The next section of conduit was built later, when the inverted siphon was replaced by the new Bridge 23. This new section of conduit is covered with narrower, newer, concrete slabs.

Continue along the path and as you reach the site of Siphon Well 2 you'll see the slabs change again, this time from the new concrete slabs back to the original granite slabs:

The change between concrete and granite slabs also happens where the path passes the locations of Siphon Wells 3 & 4.

Finally, though I couldn't see any tanks, at the site of Siphon Well 3, just next to the path there's this shaped granite block, with a square cutout at top-right. Could it be some part of the old siphon well?

They're easily missed as you walk along the path - just a short section of railings shows when you're crossing one.

But looking from below, they're still in very good shape, testament to the men who built them over 140 years ago. Note how each bridge has its number engraved into the keystone.

As you reach the first of the modern bridges at 'Bridge-26', there are steps leading down to the left.

If you walk down them you'll see the pillar that supported the conduit's second inverted siphon.

If you'd like to say hello to the tadpoles, walk uphill from the start, then when you reach the conduit cross over it and follow the path that runs along the side of the stream above Bridge 23.

There are lots of little pools and waterfalls to explore. (Lots of mosquitoes too, so bring your insect repellant!)

A few remarks to the siphons:

Inverted siphons have advantages (that's why they were built) - the can be built faster and cheaper compared to conduits.

But, of course, they also have disadvantages. When you have pipes running down to a valley, the water pressure increases by 1 bar per 10 meters, so the pipes need to have a larger wall thickness. This can be solved, but possibly these pipes have to be imported from overseas.

Apart from this, the pipes have to fear two "enemies" - corrosion and the weather. The pipes were made from cast iron which doesn't have the anti-corrosive quality compared to today's stainless steel. Taking into account the subtropical climate of Hong Kong "An iron pipe would rust and perish in the course of a few years" ( The SURVEYOR GENERAL'S REPORT ON THE TYTAM WATER-WORKS from 1885).

And the weather, or actually extreme weather events - typhoons and torrential rainfall. It's not the wind, but the rain and landslides that threaten the pipes which are above ground. It looks that the pipes were on pillars above ground that allow even increased water flow to pass underneath. But during heavy rainstorms like in 1926, the danger of pipes being swept away is quite high, see e.g. here:

So the government decided later to replace the siphons by a conduit.

The second big water supply project, the Tytam Conduit, originally had plans to use a siphon, too. "With the exception of the Wantsai Valley which it is intended to cross with a syphon of iron pipes, the water will be carried over all streams by aquaeducts of arched masonry..." It seems that this siphon was not built but the conduit was extended. At the upper end of the valley where the conduit runs, a dam was built for a small reservoir (Wantsai (Wanchai) Valley Dam [1886- ]) that caught the waters from the creek to increase the amount of water available for the city.

The surviving pillars must have been built very well to withstand all the rainstorms over the years. I walked up there one year after it had been raining heavily and there was a strong flow of water.

Thanks for the information about the Tytam Conduit, I hadn't spotted they'd planned to use the siphon there too.

Went to Pok Fu Lam Road 92 and 88a to have a look at the remaining pillars of the siphons. Found that they have the numbers 23 and 26 engraved in their headstones. These place them correctly between the numbered aqueducts which bridge neighbouring streams 22, 24, 25, and 27. I have now sent all information re the siphons from gwulo.com and the additional photographs to AAB and AMO to include in their assessment N372.

Thanks Paul, it's good to

Thanks Paul, it's good to have a different set of eyes look at the pillars, as I hadn't noticed the engraved numbers when I visited. The numbers are strong additional evidence that the the pillars were part of the original conduit.

Fingers crossed for a good response fom the AAB & AMO to give the pillars and bridges a heritage grading.)

Couldn't find any photos of inverted siphons in Hong Kong. To get an impression how these might have looked see one from Arizona, another one from California (this has a much larger pipe diameter compared to the one in Pokfulam), and an inlet to an inverted siphon from Derbyshire.