We previously looked at photos of men at work, this week it's the women's turn.

What: This lady is surrounded by coal, with mounds of loose coal behind her, large baskets of coal on the left of the photo, and smaller baskets in the foreground. She is using a shoulder pole cut from bamboo to carry two of those smaller baskets.

Where: There aren't many clues to go on, but there might be a couple of masts in the distance on the right.

That would place the coal yard on the seafront, which makes sense: coal was delivered to Hong Kong by sea and moved around by human labour, so the shorter the distance it needed to be moved, the better.

Who: The people who used shoulder poles and baskets to move coal around were known as coal coolies. Most were kept busy unloading deliveries of coal from ships' holds, then either loading it into other ships' bunkers for use as fuel, or delivering it to the large steam boliers that powered Hong Kong. A smaller group worked for the household suppliers, delivering coal to customers' homes for use in cooking and heating, and I think that's what we're looking at here. It isn't clear whether the woman is just moving the baskets within the yard to add them to the stack on the left, or setting out on a delivery.

If you have Volume 4 of Old Hong Kong Photos and The Tales They Tell, there's a photo of a woman delivering coal on page 28. She is clearly out on a delivery, as the photo shows her on a hillside path. She had even more strenuous work than the woman shown here, as she was carrying coal up to a customer's house on The Peak.

People carrying heavy loads on shoulder poles is one of the themes of Volume 4. While working on the photos for that book I'd noticed a division of responsibilities between the men and women, and wrote on page 33 that:

There are lots of photos [...] taken along the seafront and showing men carrying heavy loads on shoulder poles. But only men - I haven't seen any women among them.

Who: So although most of carrying work on the seafront was handled by men, and as far as I can tell the organised guilds of these workers were men-only, this new photo shows there were clearly women working there too.

This woman's work was even more difficult than carrying coal. Her baskets were probably just as heavy, but she also has to keep her balance to avoid slipping off the narrow plank and falling into the harbour.

What: She is carrying large baskets filled with some type of pots.

I think they're the type of clay cooking pots that we can still see around Hong Kong today. 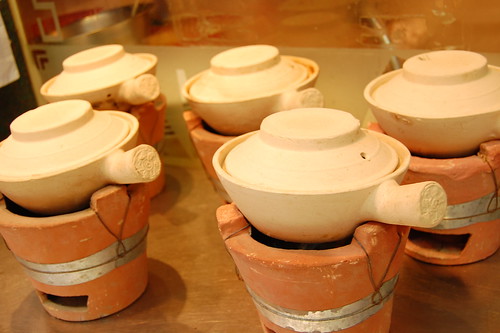 Our last woman in the set is carrying a much lighter load...

What: The photographer captured the subject's face in the previous photos, but here he's photographed the lady's back. Remembering that these photos were taken for sale to tourists, I guess he had two items in mind that would catch their attention. First is the baby, wrapped up warmly and wearing a hat, and carried in a patchwork cloth carrier.

The second eye-catching item is the lady's plaited hair, so long that it almost reaches her knees.

Who: This lady works as a baby amah, taking care of her employer's child.

Back in the 1930s, one group of amahs that stood out from the rest were the 'ma je'. They came from the nearby Shun Tak area of southern China, and were famous for having taken vows of celibacy, and never marrying.

The ma je were known to keep their hair long, worn in a plait down the back when younger, or wound into a bun when older. They wore the sam fu stule of clothing, with a white top and black trousers.

The lady in this photo fits that description, but was she a ma je? The answer depends on whether having long braided hair and wearing the black and white sam fu was restricted to ma je, or was just a common look for amahs in general. The document linked below suggests the style was unique to the ma je:

They were easily identified by their plaited hair or hair bun and distinctive black and white samfu outfit.

But many Chinese women keep their hair long, and a white top is typical dress for an amah, so I'd guess the lady above could just as easily come from a different background and not be a ma je at all. If you can add any information about this, please could you leave a comment below?

Where: The photographer has chosen to have the subject sharp but the background blurred, which makes identifying the location difficult. Maybe somewhere along Des Voeux Road towards Sheung Wan?

As always, if you can add any more information or memories of similar scenes, please let us know in the comments below.

The photo shows no coal dust on the ground. I bow to the vastly superior knowledge of your contributors. But the ground is black where coal is handled. I've worked with coal in power stations and some coal carrying ships. The black dust gets everywhere!

Many thanks generally, a wonderful site, truly great contributors. I long to return to HK, and just feel the energies of the people.

The lady was definitely an Amah. Samfu 衫褲 was a popular everyday wear for HK Chinese women up till the '70s. The top and the bottom were made with the same fabric, other than the ones worn by the Amahs. Female students from Maryknoll Fathers School Primary Division still wear samfus as their school uniforms.

She was likely a majie 媽姐 from Shun Tak as the photos of amahs from Shanghai etc. that worked for the ex-pats showed that they wore their hair much shorter and wore regular samfus instead of this uniform type samfu.

I'm not sure if the majies worked mainly for the Chinese or also worked for the ex-pats.

All of them "retired" and in came the Philippine maids. Back then they came down from China when they were very young, likely before adolescent and they serve the same family their whole lives. Flats were bigger back then and servant rooms were part of the designs, usually behind the kitchen by the back door. They dressed like that one you shown in the pictures and have the long hair braided. The ones my family have were loyal and stayed with us until retirement. My late father was picky with food but never complained about their cooking. If their cooking or other things had issues it would be my grandmother or my mother dealing with them. Given they had no family (never married) other some niece and nephews, my family made arrangements for many of them to go to retirement home and paid them something until they died.

The Chinese servants after that in the 1980s and on aren't the same, they aren't as loyal or as reliable.

re: Women at work

Thanks for the extra information about the amahs.

Good observation about the lack of coal dust too. I'm pretty sure that's coal the lady is moving, both from the shiny look of the stuff at bottom left, and I can't think of anything else that would be stored and handled like this. But I remember the coal yard I walked past on the way to school, and the ground there was covered in coal dust, so I'm not sure where it's gone to in this photo!

More of the building for identification.

Though the colour in the photo does not show, I think the woman was carrying charcoal.  Coal weighs less than water (about 0.75), and charcoal weighs even less (about one-fifth of that of water).  There was almost no deflection in the bamboo pole, and she could bend the rope without much effort.  Regards,  Peter

Oldtimer - good observation. It was something lighter weight but might not be charcoal as charcoal pieces should be black (esp. the lower-left corner ones that were not in direct sunlight) and not as reflective, and usually more elongated in shape. BTW my uncle was one of the 2 importers of charcoal from Singapore.

Thanks tkjho for your comments.  My next guess is dry cow dung.  It should not weigh a lot when all the moisture  has been removed, to be used as fuel -  https://en.wikipedia.org/wiki/Dry_dung_fuel