Thanks for your wonderful reply of 9th August '43 on the back of the Red Cross letter I sent to you on 16th July '42 which I received on 2nd February '45 so that it is a well and long travelled form isn't it astounding how a message to you and back to me should take such a time as 31 months to go and come back.

What I'm now longing for is to send you a telegram and have a reply back in say less than a week. That happy event may come our way very soon we hope. I also received your loving letter of 14th February '44 on the 7th February '45 and I'm very pleased to know that you were all right then. The post mark is also Edinburgh so I'm entitled to think that you are now staying and working in Auld Reekie. Good Luck Lass.

The weather here has been terrifically cold, really cold and said by the observatory people to be the coldest and longest stretch of cold weather Hong Kong has had for 40 years. Whether that is true or not the thermometer registers cold and of course our condition being so poor and malnutrition effecting everyone the long spell of cold is really hateful and I fell it very much.

I have a bath about once a week and go to the block kitchen for it where it is warm and I get warm water by privilege. I think that I felt that a cold shower which I formerly was so fond of would give me either an apoplectic fit or total collapse, so I'm not having any until it gets warmer.

Yesterday, 13th was the Chinese New Years Day. Quite a squadron of Japanese Naval Ships was spotted near to Stanley yesterday evening presumably on their way North probably escaping from the Southern regions. I hope our lads nab them before they get very far.

The food is still very poor and we have all been vegetarians for the past fortnight as it is exactly two weeks since the Japs sent us any fish, not that it makes much difference as we get very little of that. The Japs are asking us for our menus and as no quantities are being shown against the vegetables and water and rice it would appear that this is for propaganda purposes to tell the world how kind they are to us. I don't think.

The black market is going strong in Stanley with trading over the wire by the Indians much to the displeasure of the local guards who wish to make all the squeeze, pork 500 Yen a catty, wong tong 120 Yen lb., duck eggs 40 Yen each. Incidentally I had one a couple of days ago fried and oh boy it was great. I could have eaten six with a pound of sausages which would have been a lightener.

Canteen prices are very expensive, 1 box of matches 4 Yen, egg yolk 14 Yen for 3 oz, salt 5Yen for 1/4lb, bran 12 Yen for 1/2lb, wong tong 19 Yen for 1/2lb, other articles fabulous prices and so on. Cigarettes in the Black Market are approx. 25-28 Yen a packet of 10. People are selling anything and everything gold rings, watches, diamonds etc. to the guards for Yen to buy food. 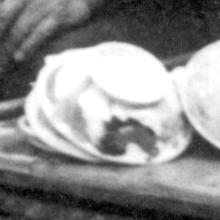