Way back in January 2013, I sent out a newsletter titled: Please help - looking for old photos of the Central Police Station compound. The photos were for a new book, and I smile now to see I wrote, "The finished books won't start appearing until next year". The project took much longer than that, and at times I wondered if we'd ever see the book in print. Over seven years later I'm happy to see that the book has just been published: 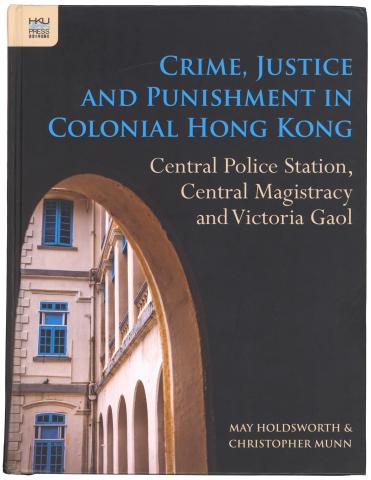 The book documents the history of the Central Police Station, Central Magistracy, and Victoria Gaol. My job was to track down the pictures to illustrate it.

May Holdsworth, leader of the project, was clear from the start that the book would have pictures throughout, not just a few pages of photos in the middle as an afterthought. May also encouraged me to find as much colour as possible, as old photos and engravings tend to be in black and white, which can get a bit monotonous.

We ended up with a collection of over 1,000 candidates, but even after narrowing them down the book still has over 200 pictures. That's a lot of pictures - open the book at random, and you'll almost always see at least one - and many of them are published for the first time. Here are some examples, grouped by their source.

Archives are the obvious place to look for old pictures, and the UK's National Archives (UKNA) are always a rich source of material about Hong Kong's history. The UKNA is also a joy to visit, as despite the enormous size of their collection, whatever you order is soon delivered for viewing.

This document was the first surprise from the UKNA. It shows plans from the late 1850s to rebuild the gaol - the gaol buildings are highlighted in pink. I was familiar with the southern half of its radial design (shown at the top on this plan) from old maps and photos, but these plans also show a mirror-image, northern section.

A later map from their collection confirms that only the southern section (back at the bottom on this map) was ever built.

Some of the plans also show us what the old buildings looked like, and in this case we even get a glimpse inside to see the tread wheel that would be part of the prisoners' punishment.

We used some of the UKNA's photos too, such as this view into the prison yard.

I've seen this photo published before, but we were able to combine the UKNA's high resolution copy with Christopher Munn's understanding of the era to interpret it in a new way. We realised we're looking at probably the only existing photo of Hong Kong prisoners working on shot drill. The prisoners would have to pick up a heavy 'shot' or cannonball, carry it for a few paces, set it down, and repeat, over and over again.

Another archive that turned up some great images is closer to home: the Hong Kong Museum of Art. Sketches and paintings provide the earliest images of Hong Kong, and I was excited to find this in their collection.

The scene is well known, as it was reproduced as an engraving in the Illustrated London News: 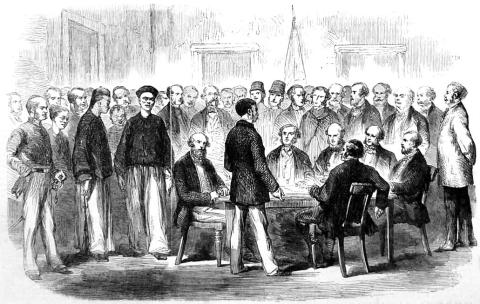 But this was the first time I'd seen the original sketch the engraving was derived from. The book includes several other early sketches from the Museum's collection, as well as 19th-century newspaper engravings from other collections.

We were also very fortunate to have several individuals respond to my newsletter's request for help. Some of these contacts happened several years after the initial request for help, so an unexpected benefit of the project's extended timeline is that we could still include these later contributions in the book.

As these private collections aren't widely publicised, they can turn up some very valuable surprises. Roy Delbyck's collection is a good example - it has all sorts of material about Hong Kong and China in the 19th and early 20th centuries, including copies of the short-lived China Punch magazine. Several of the people mentioned in the book also appeared in the China Punch, usually in less-than-flattering cartoons.

Even rarer were some of the items that family members allowed us to include. The Pennefather-Evans family has a scrapbook that includes the picture below. It shows John Pennefather-Evans, Commissioner of Police in 1941. He spent 1942-45 interned by the Japanese in their internment camp for civilians at Stanley. The picture was drawn in the camp by a fellow internee, on brown wrapping paper.

Also interned at Stanley was James Norman, who after the war would rise to become Commissioner of Prisons. The internment camp included part of the Stanley Prison's grounds, so he'd spent the war as a prisoner in his own prison!

From further back in time, this sketch has miraculously survived to be included in the book. It's from the 1860s, showing pirates in court at Hong Kong. It was drawn by E. M. Dayrell, in Hong Kong at the time with the Royal Navy, and is still in his family's possession today.

The Tai Kwun site is valuable because so many of its old buildings are still standing. I can't think of any other similar sized collection of buildings in Hong Kong that are over 100 years old.

This meant we weren't limited to historic photos, but could also include work from contemporary photographers.

Finally, where we drew a blank on finding any suitable picture, May commissioned local illustrators to recreate scenes like these.

These are just a small selection of the book's pictures, but I hope they give you an idea of what's included.

Of course the meat of the book is the writing, by co-authors May Holdsworth and Christopher Munn. Here's their description of the book from the back cover:

"This richly illustrated book draws on a wealth of sources to offer a vivid account of those three institutions from 1841 to the late 20th century. It is firmly focused on people and their stories, weaving across a social landscape populated by captains superintendent and magistrates, gaolers and constables, thieves and ruffians, hawkers and street boys, down-and-outs, prostitutes, gamblers, debtors and beggars - the guilty as well as the innocent."

They've covered the topic in depth, so the finished book runs to 331 pages, and 130,000 words. However, though the topic sounds weighty, this week's review in the SCMP confirms that May and Christopher have produced a very readable book:

"At once informative and entertaining, it brings both Hong Kong’s judicial system and its early history to vivid life."

Thanks to all of Gwulo's readers and contributors who helped me finding these and many more pictures to use in the project. Thanks also to the project sponsor, The Hong Kong Jockey Club, as without their support there would be no book, and to Hong Kong University Press for the high quality of the printed images.

If these extracts have whetted your appetite, copies of the book are available to order from the Hong Kong University Press website. They also have sample pages available to download as a PDF.

Here are some additional resources about the book and its topic: 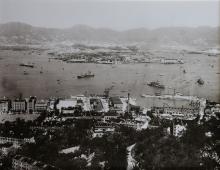