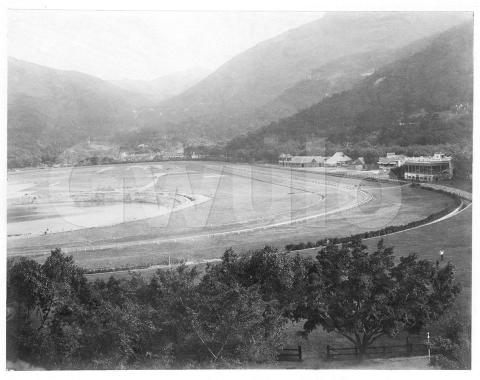 Where: This is an easily recognised view, but in case of any doubt there's a pencil note below the photo - "Racetrack at Hong Kong".

What: The circular pond, marked (A) below, first caught my eye as I don't remember ever having seen it before in photos of Happy Valley. 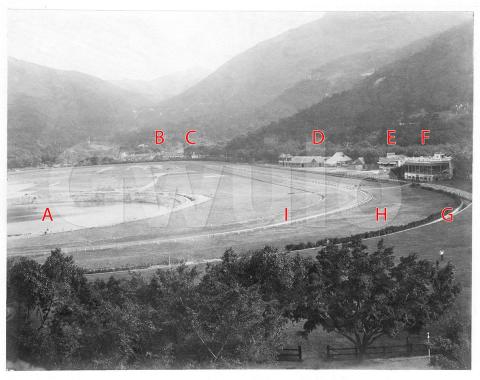 I did have a faint memory of having seen that shape on a map though, and went looking through the maps I'd photographed on visits to the UK's National Archive. Here's the one I had in mind, a map of the area from 1889 [1]. It has a circular patch in the same place as the pond above, and with the same light-green colour as streams and other water features: 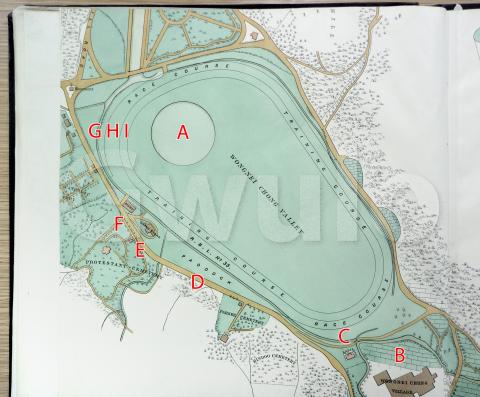 We'll move clockwise around the photo and map to see the other local landmarks:

Wong Nai Chung, or "yellow mud creek" was the original name for the area before the British arrived. Today the village is gone, and we think of the area as Happy Valley, but Wong Nai Chung Road still carries on the old name.

This building to the right of the village has a different style from the village buildings, so I think it is the school shown on the map. 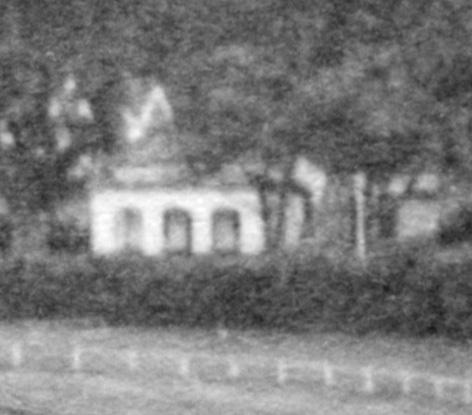 It is marked 'Paddock' on the map, a piece of land where horses are kept. The map doesn't show the stable buildings we can see in the photo, suggesting they are temporary structures. At full magnification it is clear they are temporary matshed buildings built from bamboo and thatch, rather than permanent buildings like the next two. 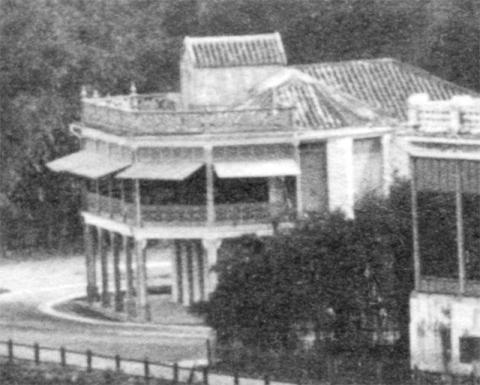 Another two-storey building, newer than the Grand Stand. The upper floor looks to have tiered seating. 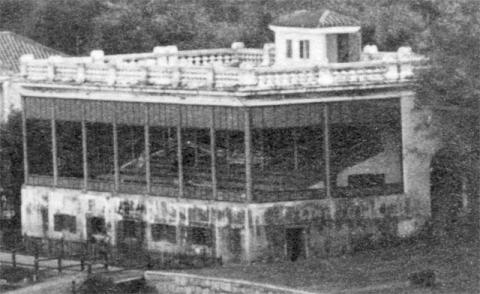 The reflection shows there is water running along it. Nullahs (drainage channels) were dug around both sides of the racecourse to help drain the racecourse land, and to carry away the water from the several streams that ran down into the valley. The nullahs met at the north end of the racecourse (the foreground of the photo) where they discharged into the Bowrington Canal. 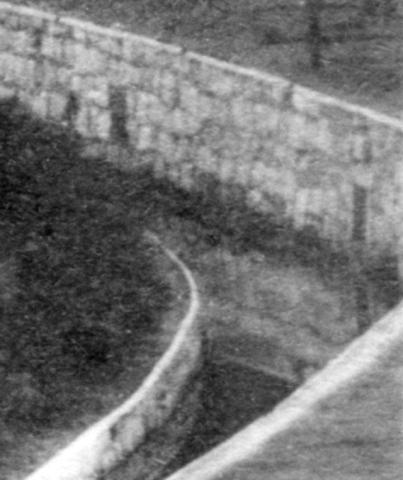 The wider, outer course is where the horses ran their races. Just inside it was the narrower course used for training rides. If you look in front of the Stand, you can see the bridge across the nullah that provides access to the courses. When this photo was taken, there are barriers directing visitors across both courses to the central area, so it doesn't look as though any horses were expected on the courses that day.

When: That pond, and in particular its appetite for golf balls, is our first clue for the year this photo was taken.

After the Hong Kong Golf Club was founded in 1889, their first golf course was laid out here, on the flat land inside the racecourse. However, that large pond caused problems for the golfers: "One hole, the 8th, became known as 'Old Misery' on account of the pond which swallowed up balls, scarce at the time." [2]

I'm guessing the golfers included a few members of government, as they soon had the pond filled in: "Prior to 1890 there was a large round pond, at the northern end of the land inclosed [sic.] by the race-course track, which was filled up in that year for the convenience of golfers, who started the first Hongkong Golf Club there in 1889 (now known as the Royal Hong Kong Golf Club)." [3]

So the photo must have been taken before the pond disappeared in 1890.

The next clue is this engraving of the racecourse: 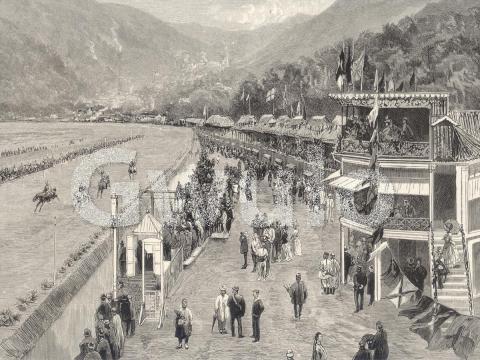 It appeared in the June 2, 1888 issue of The Graphic. It shows that by 1888 a third storey had been added to the Grand Stand, and that the stables had been expanded. So the photo must have been taken before 1888 too.

Finding the start of the range of possible years is more tricky:

As the buildings haven't helped, I'll indulge in a bit of guessing, based on the condition of the flat land in the middle of the race course.

Originally the land was farmed by the villagers, but that ended in the early 1840s when the British government resumed the land. The race course was built, with the first races held in 1846, but after that it seems the land in the middle of the course was left to its own devices. Almost 40 years later, an 1885 article [6] described it as "meadow land inside the race course, which has hitherto lain unused and waste".

The 1885 article was recording Governor Bowen's visit to the racecourse to "turn the first sod", and start the project to drain and re-develop the land. Bowen said the project would "convert this marshy and malarious swamp on which we are now standing into a place of public resort."

At several points in the photo, the neat, straight lines give the appearance of turf being laid. 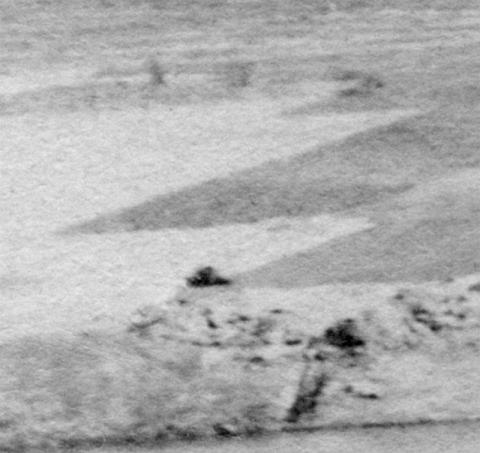 I guess that the pond was dug as part of the drainage project mentioned by Bowen, and that the photo shows turf being laid on the drained land to turn it into that "place of public resort". That means the photo was taken some time between Bowen's project starting in 1885, and the 1888 engraving of the Grand Stand. It also suggests the pond only existed for five years at the most, which would explain why it doesn't show up in many photos.

As always, corrections welcomed - and if you have any dated photos or engravings of the area in the 1880s, they would be good to see.

Who: There look to be groups of people working on the land in the distance, but they are too far away to see clearly.

In the foreground there are three people by the nullah, and two men on the flat ground. The ghosting around the men shows that the photo was taken using a long exposure. 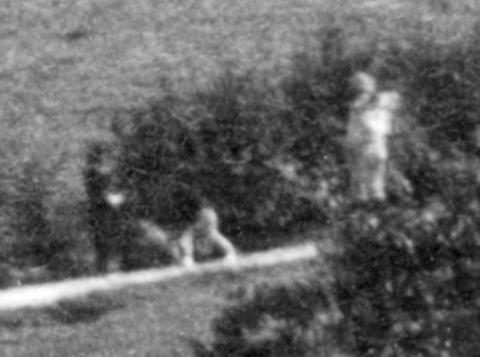 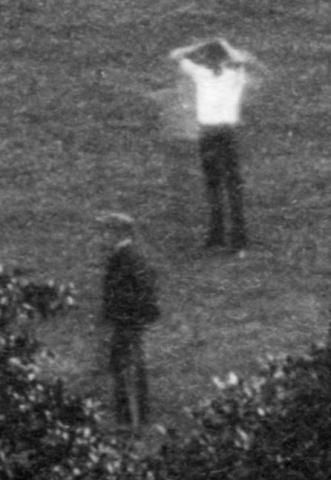 Greetings.  One very impressive photo analysis!  On grading the land, they must have had used machinery capable for the purpose, or was it done manually?   I don't know if this is still a popular phrase, in the 1950s some adults were saying "going to the racetrack equates going to lay sods" which I understand as loss.  Regards,  Peter

Thank you David for a very interesting investigation. In a book, 'The Cree Journals' there is an interesting water colour of the Happy Valley painted in 1841 by Edward Cree who was a Surgeon in the Royal Navy, and who kept a detailed diary of his travels and the events surrounding them.  This painting illustrates a funeral party carrying the body of Brodie, a fellow Naval officer, to the cemetery there on Friday 18th June 1841.  In the background the village of Wong Nai Chung can be seen and, while the hills are devoid of any tall vegetation, there are many coniferous trees in the foreground and on the lower Eastern and Northern sides of the valley.  There is no sign of a large circular pond but as David suggests that was dug out many years later when the race course was being developed. Cree's watercolours, painted before the days of photography, provide us with remarkably accurate illustrations of Hong Kong, and many other places visited by his ship in the Far East and elsewhere. In his journal Cree descibes the many illnesses and deaths in those times and one suspects that most of them were due to Malaria.

I have tried to find the copyright holders for permissioin to include the image but the two family members are now dead and I believe that the publisher ceased business in 2012.  However, copies of this book, 'The Cree Journals' (published by Webb & Bower in 1981, ISBN 0-906671-36-1), are available on the Internet and my copy is a source of constant enjoyment..

Thanks for the feedback ...

Thanks for the feedback ...

Klaus, I think the development of the Recreation Ground will be an interesting topic in itself.

Peter, I guess the work was done manually, as I haven't seen photos of any machinery in use in Hong Kong at this time.

The book Andrew mentions, The Cree Journals, is available at Amazon and Abe books.

The photograph is from UK national Archives dated 1905c oddly refers to the view of the RACE COURSE from The Haunted House. 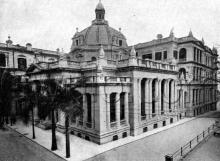