Not much about Rediffusion is available, especially its English service, the Blue Network. If you know anything or have listened to their programmes, please leave your comments below. Many thanks!

There is some information related to Rediffusion in issue 9 of Post 41, produced by The Heritage of Mei Ho House: https://www.yha.org.hk/wp-content/uploads/post41/HMHH_Post-41_09.pdf

It is interesting though, that residents in resettlement blocks would install Rediffusion (radio or television). Quite a number of books stressed that it is much more expensive than RHK or Commercial, considering how the advent of transistor radios cut the cost of radio listening sharply.

The Hong Kong company was formed by 1948 the latest, as there was a Rediffusion advertisement on Page 2, South China Morning Post, 1948-12-15. Its HK$9 monthly fee was dear, considering the annual licence fee charged for Radio Hong Kong was roughly the same.

The Governor, Sir Alexander Grantham, officially opened the service at 7.15 p.m., 22 March, 1949. A report (Page 5, The Hong Kong Telegraph, 1949-03-22) gave readers a preview before the opening. It also noted that experimental programmes have been relayed 'for over a week'.

SIDELINE: One particular paragraph caught my attention (Chinese names are added by me):

'The first artist to broadcast from the studios after the inauguration will be six-year-old Wu Shuk-ying (伍淑英), daughter of Mr Wu Shun-tak (伍舜德), manager of the Queen's Theatre. She will give a short piano recital.'

Mr Wu went on setting up Maxim's, one of the food giants in Hong Kong, with his brother.

The following day saw a report on the opening speeches: Page 2, The Hong Kong Telegraph, 1949-03-23. The Telegraph mentioned the cocktail party following the ceremony entertained more than 500 guests. South China Morning Post on the same day (p.7) gave more details about names [By the way, does anyone have any idea who those people are?]:

'His Excellency, who was accompanied by Capt A. P. F. Wilson, ADC, was met by the Hon M. M. Watson, Chairman of the Board of Directors of the Broadcast Relay Service (Hongkong) Limited, Dr the Hon S. N. Chau (周錫年) and Mr Frank Harris (Managing Director).

'Both speeches were translated into Chinese by Dr the Hon S. N. Chau, a Director of the firm.

'Guests were then entertained with a programme of music provided by six-year-old Miss Wu Shuk-ying (pianoforte), Victor Orloff (violin), Joan Turville (soprano) and Raymond Lui and his Hawaiian Band and a relay of the Paramount Dance Orchestra with vocal accompaniment by Miss Yvanovich.

'Mr M. F. Comer is the Chief Engineer with Mr S. Cowell as Network Engineer and Mr C. Winglee as Equipment Engineer. There is a total staff of over one hundred.'

Some related pages on Gwulo

The route of their old cable network can still be seen from their inspection covers, found in Hong Kong's pavements:

An advert for the launch of the new TV service:

Another person connected with Rediffusion is Cliffton Large, who presented their "Rediffusion Television Jigsaw" show.

I have been researching about Rediffusion's history, but people were mostly talking about RTV.

What about the sound service? Even though its Cantonese radio drama serials were hugely popular, the Cantonese Silver Network has a limited amount of info available, let alone the Gold (other Chinese languages) and Blue (English) Networks. It would be great if anyone who has listened to Radio Rediffusion can share a few words.

Re: More about Rediffusion

Thank you for the link!

But as far as I know, RTV was actually a separate entity controlled by Rediffusion HK. Selling RTV off did not change the fact that Rediffusion HK was still a subsidiary of Rediffusion in the UK.

Two Rediffusion brochures have listed their services after they left the broadcasting field, I will post the info here some time later.

A look at the companies register indicates that Rediffusion (Hong Kong) Limited is a live company but dormant since 2014.  It held the broadcast relay station licence, and was providing broadcast relay service for domestic free television signals for tenement buildings in certain areas (e.g. western end of Wan Chai).  This service was ceased on 8th January 2011.  At that time, the company was a member  of the Wharf Group.

When free to air Tv arrived with TVB in 1966/67 the cable service was on its last legs. It did struggle on, we had it I Shouson Hill in the early 70s but not for long. When the RHKJC started on line betting, George Wright Nooth thought that the RHKJC could make use of RTV's cables, which were extensive, to set up their betting. Whether this came to ought I cannot tell

My grandmother, Florence Neave, was born and raised in Hong Kong where her father Thomas worked for Hong Kong and Whampoa Dock. She left around 1920. She married my grandfather Gordon Alder who worked for Rediffusion in the UK. They were posted to KL in 1948 to look after the Rediffusion cable radio business that broadcast in several Chinese dialects in Malaya as it then was. There is a family story that my grandmother never let on to the Malaya Chinese staff that she could understand Cantonese and they spoke in front of her not realising she could understand. I don't know if it is true. Later I came to Hong Kong in 1993 to work as a lawyer. By coincidence, I handled a couple of small matters for Redifussion Hong Kong which by then was, I believe, incorporated with the Cable TV / i-Cable business, possibly in the satellite TV area but I struggle to remember. The name stopped being used in the mid 1990s I believe. 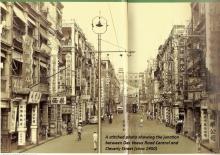 A stitched photo showing the junction between Des Voeux Road Central and Cleverly Street (circa 1950).jpg