Though "selfie" is a modern word, sending photos of ourselves to friends is almost as old as photography itself. The photos below were taken in the photographic studios of Hong Kong in the mid- to late-1800s, and given to family and friends around the world.

I've added notes to the photos, but I'm hoping your detective skills can add more information. If you can identify military uniforms, I'll be especially interested to hear what you can tell us about the soldiers and sailors in the group. Please leave a comment below if you spot anything interesting. 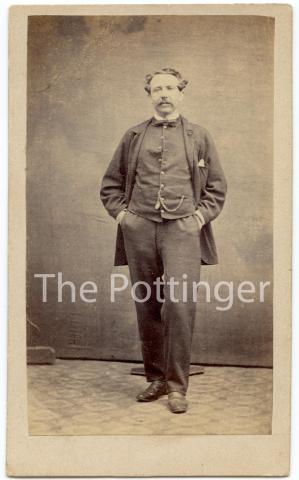 The back of the card gives the photographer's name as "Kai-Sack", and his address as "Opposite Stag Hotel, 109 Queen's Road". The seller dates this to c.1867, but when I look up photographer Kai Sack in Terry Bennet's History of Photography in China: Chinese Photographers 1844-1879, Terry only has firm records of Kai Sack in business from 1864 til 1865, so I've dated it to a couple of years earlier.

c.1868 - Western man with a splendid beard, by Hing Cheong 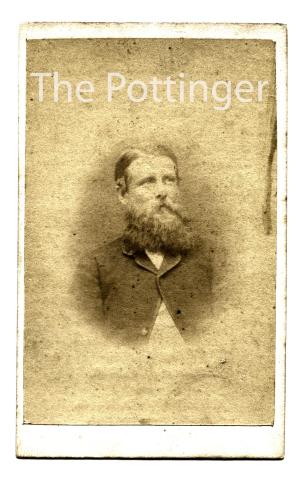 Looking through these photos, it's clear that Victorian manliness required facial hair, and preferably a centre-parting too! 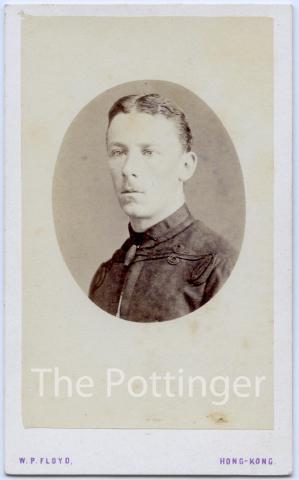 Here's the rebel of the group, with no sign of a beard or moustache.

I'd hoped I could find more information about him, but it seems the recipient of this card didn't catch the man's name clearly, as the pencil note on the back of the card reads: "CAPT M DOUGHT(Y)? 10th Regt. 1872".

The 10th Regiment of Foot was certainly in Hong Kong for most of 1872, so if you can identify which of their Captains this shows, please let us know. 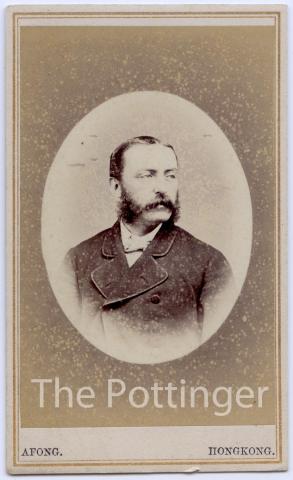 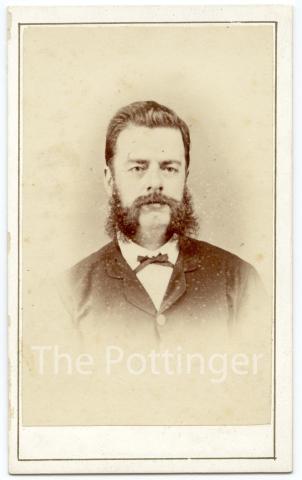 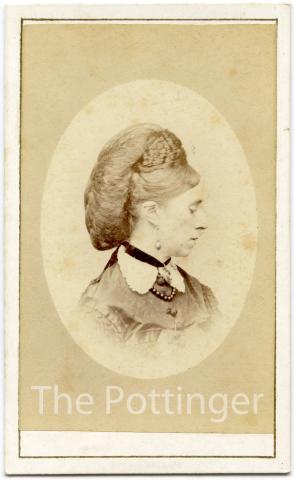 Mr George Holmes was a long-term resident of Hong Kong, first arriving in around 1856. We learn that in a court case in 1886, when he was applying to be discharged from bankruptcy. Presumably that worked out, as the 1895 Peak Directory shows him living at the Peak Hotel.

The two photos are from happier times, c.1872. There were many more men than women in Hong Kong at the time, so it is good to see a photo of his wife as well. They had a long marriage, as the 1895 Ladies Directory also shows her living at the Peak Hotel.

The last mention of George in the Carl Smith cards is a note that his furniture was up for auction in 1890, at which point the couple likely left Hong Kong.

[Update: I've got my dates in the wrong order, as after the 1890 auction the couple were clearly still here in 1895. The last mention of George Holmes in the Jurors Lists is the list for 1896, so that's more likely to be the year they left.] 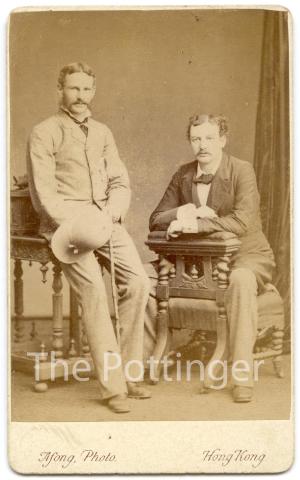 You might think "photoshopping" an image is a modern problem, but the old photographers were also happy to help you look more attractive. Usually I'll see they've made the eyes look a bit sharper, but in this case look closely at the man on the right and you'll see a light patch on his head has been darkened - likely to avoid any suspicion of baldness! 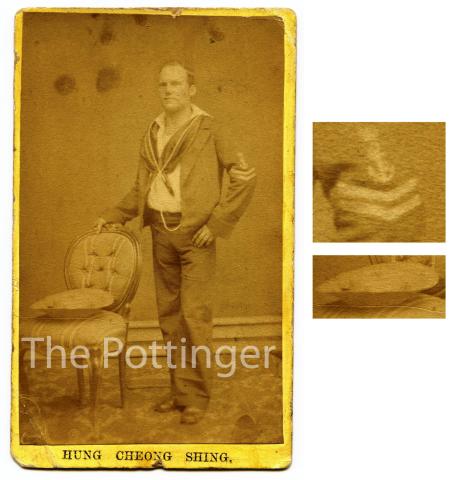 This one is tricky. It certainly looks old, and the seller dated it to c.1867. But the back of the card gives the photographer's address as "Opposite Messrs. Lane, Crawford & Co's, No 32, Queen's Road Third Story". Terry shows the photographer at this address from 1879-1881.

So, c.1867 or c.1880? Is there anything about the sailor's uniform that would help pin down the year? (Remember that you can click on any photo to visit its page, then click on "Zoom" to zoom in and see more detail.) 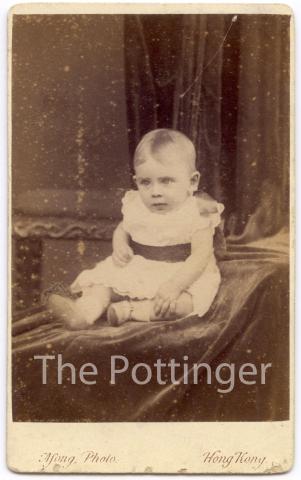 No need to guess who this is: a note in ink on the back says "Maggie Watson Bain age 6 months March 1884".

I thought that with a name and 1883 as her year of birth, her details would quickly pop up on the internet, but no luck so far.

There were a couple of men surnamed Bain in Hong Kong in 1883 who were long-term residents and potentially the father of this young lady:

Of course it's also possible that Miss Bain was born into a military family, and her father was here with the army.

[UPDATE: Contributor eurasian_david confirms she was the daughter of William Neish Bain. The Bain family left Hong Kong in 1885, to live in Scotland. Hong Kong wasn't a very healthy place to raise children at that time, so perhaps Maggie's arrival was part of the reason for the move.]

All the photos above are in the "carte de visite", or CdV format. This was an international standard, so wherever you bought one, the card always measured 2.5 x 4 inches. Standard-sized cards meant standard albums could be produced, and exchanging CdV photos became immensely popular.

There were also larger "cabinet cards". They looked similar to the CdV, but used a larger card, measuring 4.5 x 6.5 inches, so they could display a larger photo.

As we've seen, the CdV photos were the popular choice initially, but over time they fell out of fashion and were replaced by cabinet cards. I'm not sure when Hong Kong's photographers first started producing cabinet cards, but in this collection the first cabinet cards are the next two photos, dating from c.1885. 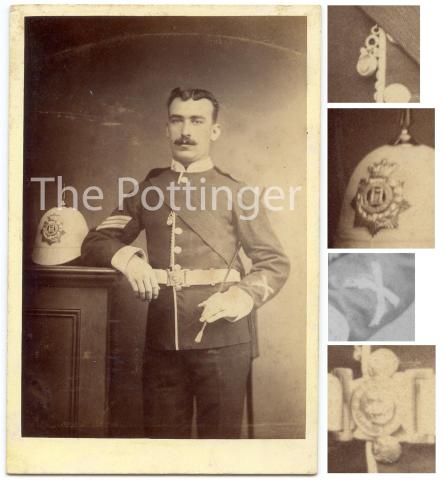 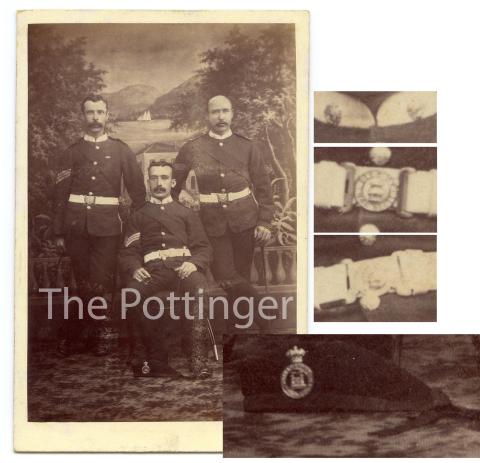 These two photos show a single sergeant, and a group of three, all from the same regiment. I've enlarged some of the details of their uniforms, in case you can recognise them.

The regiment's badge is seen on the helmet in the first photo, and on the beret in the second photo. It looks to me like a circle with a castle in the centre, and a crown on the top.

[UPDATE: The badges are identified as belonging to the Northamptonshire Regiment, see https://gwulo.com/comment/47323#comment-47323] 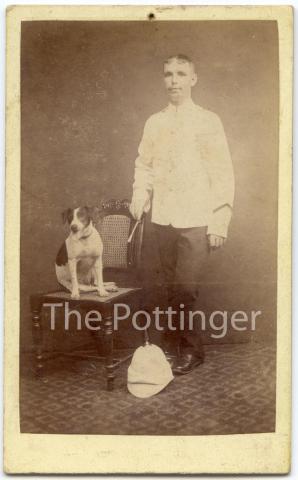 I think he's a lance corporal based on the single stripe on his sleeve, but please correct me if I'm wrong.

[Update: I'm wrong! Thanks to readers who've explained that the stripe with the point facing up signifies good conduct.]

Can you spot any other clues about who he was?

Though it comes from the same photographer as the previous two cabinet card photos, and was taken around the same time, this used the smaller CdV format. So the CdV and the cabinet card co-existed for some time. 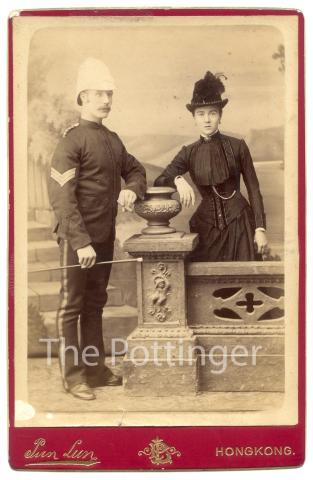 We finish with a cabinet card showing this handsome couple.

The back of the card tells us the photographer was at 76 Queen's Road Central, which gives us the date. No notes to help explain who we're looking at though, so please let us know if you spot anything.

The source of these photos

These photos belong to The Pottinger, a boutique hotel on Pottinger Street in Central. I'm working with them on a project to prepare an exhibition of old Hong Kong photos, showing people and scenes from around their neighbourhood. It will be open to the public so I'll let you know when the dates are fixed.

I've used Terry Bennet's research to help put dates on several of these photos. He has documented when the different studios were in operation, and their various locations.

The European photographers tended to only stay in Hong Kong for a few years. eg we have a photo taken by Emil Riisfeldt, which Terry says was in operation from 1871 til 1873. That makes it easy to put a c.1872 date on the photo.

Successful Chinese photographers like Pun Lun were in business for several decades, so just knowing their name doesn't help us with the date. But luckily they tended to move around, so their address changes every few years. The last photo in the collection was taken when Pun Lun were at 76 Queen's Road Central. Terry has them at that location in 1889.

For more about the studios, and more examples of their photos, see:

Sometime ago I posted a photo by Pun Lun when he had his studio at 56 QRC.

I have a Book Post cover (but it stated that its for photographs only) in 12/2/1902 stating that Pun Lun is located at 76 Queen's Road Central, Hong Kong.

And I just found some other photos online also showed 76 QRC address.

Various addresses can be

Various addresses can be found on Gwulo here. (scroll down almost to the bottom).