RTHK has its 90th birthday this year, and Annemarie Evans asked if we have any information about its history. (This includes RTHK, and its previous incarnations as Radio Hong Kong, and radio station ZBW.)

There isn't much here, so if any readers have memories / photos to share, please could you let us know in the comments below? Annemarie is specially keen to hear from previous broadcasters. 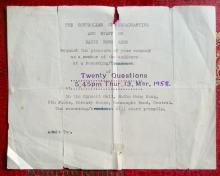 A report from February 1928 describes a transmitter at the Lee Theatre:

Another wireless test transmission will be carried out by the Y.M.C.A. Entertainment Committee from 6.15 p.m. onwards today. Further improvements have recently been made to the transmitter, which is now installed at the Lee Theatre, and recent reports show that both the quality and strength of the transmissions are excellent.

Further tests along similar lines were reported on the 17th and 23rd of February.

It's not clear what connection, if any, they had with the government's plans for radio. Those plans were reported in June, but don't mention the YMCA or the Lee Theatre:

Following the announcement that Government broadcasting of test musical programmes is being curried out, a Telegraph representative who called on Mr. L. H. King, electrical engineer of the P.W.D., this morning, learned that a provisional scheme for the transmission of broadcast programmes through the medium of a Government station in Hongkong has been arranged.

Tests have been carried out for some time past, using the transmitter at the Observatory Station. This transmitter has now been transferred to a new site on Victoria Peak, and the resumption of daily weather reports will take place next week. Further tests will also take place nightly, the programmes consisting of electrically-reproduced gramophone records.
These test transmissions will be extended until the end of this year, when a properly equipped studio will be available.
Educational Talks.
When the studio is ready, a programme consisting of music, lectures, educational and other matters of public interest will be inaugurated, and it is hoped that local radio organisations will assist in providing some of these items.
Apparatus is also being obtained to enable outside programmes to be relayed to the studio, such as religious services, organ recitals, and items of special-interest.
When atmospheric conditions are suitable, an endeavour will be made to relay programmes from London

Such a service can only be built up gradually, and progress will depend on the financial support obtained from the sale of licences and other fees. Any place of amusement fitted with the necessary microphone and amplifiers can, by arrangement, transmit approved items for advertisement purposes.

The station will use the call sign G.O.W. and will transmit on a wave length of 300 metres.

Listeners’ licences arc obtainable from the Postmaster General, the charge being $5 per annum. This charge may be increased later when the scheme is more developed.

Further details of programmes will be issued to the Press from time to time.

At the end of the year, the "Communications" annual report for 1928 gives a different call sign, ZBW, for the new wireless station:

4. Early in the year a new site for a wireless station, to be built and organised on the most up to date lines, was chosen at Victoria Peak. A considerable amount of progress has already been made in the erection of station buildings, masts etc., and two transmitters are already installed there, one working on 300 metres for broadcasting musical programmes, weather reports, news bulletins etc. and when not in use for broadcasting working on 850 metres for commercial services, and the other one working on 49 metres for communication with points in South China and French Indo-China. The station which is still in course of erection will, when completed, accommodate high power short wave long distance transmitters for commercial working with practically all parts of the world. The call signal of Victoria Peak Wireless Station is ZBW and its position is Lat. 22°16' 38".56 N., Long. 114°08' 31".95

Hong Kong's first radio studio was finally ready in July 1929, and was located in the Post Office Building:

BETTER PROGRAMMES TO BE ARRANGED.

Hongkong now possesses, for the first time in its history, a fully-equipped broadcasting studio which makes possible the transmission of concerts, etc., without recourse to relaying from a concert hall or theatre.

The completion of the studio, which is located in the Post Office Building,  marks a further important step in the development of radio broadcasting in Hongkong, enabling better and more varied programmes to be transmitted via ZBW.

It follows closely on the lines of the studios of the British Broadcasting Company when wireless first took its grip on England. In those days the studios at even the main stations were comparatively small, for the programmes had not been developed and there was no need at that time for accommodation for huge orchestra, musical comedy companies, big choirs, etc. The present studios in the Home radio stations are huge rooms permitting almost any kind of entertainment to be broadcast.

Received this invitation when on 7 days leave at China Fleet Club while serving with 1st. Royal Tank Regiment in Sek Kong. Sorry, unable to remember any of the panel !!

One of the older QSL (Q Code for Acknowledgement of Radio Reception) Cards issued by ZBW in 1934 can be viewed here Shows the main studio, transmitter building and technical facilities.

Early radio broadcasting in Hong Kong can be viewed here

In 1937, ZBW was looking for radio announcers with the "ideal voice". The Sunday Herald put out a tougue-in-cheek article of the qualites that were required. See here

ZBW in the war years

A search for ZBW on Gwulo shows how it bracketed the war in Hong Kong: