I liked this photo as soon as I saw it, so I bought it without any story in mind. Let's see what we can find out about it. 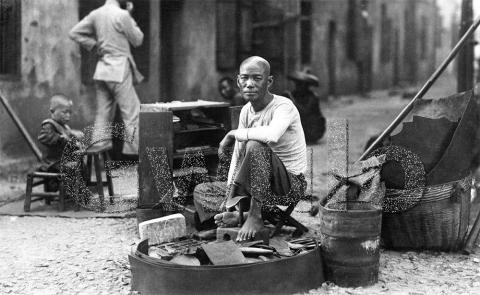 When: No help from the back in this case: 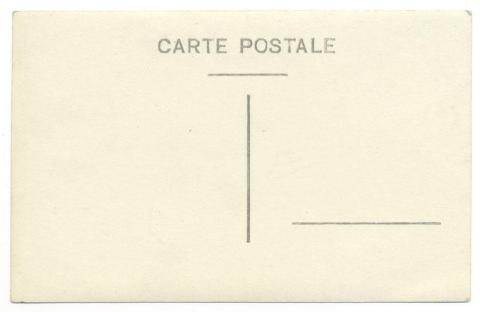 It was printed by a commercial photographer, but there isn't any stamp box to show us which manufacturer's paper they used. There is a clue from the shape of the photo though. We've seen this format, short & wide, in other photos that came from the 1920s [1]. Not a lot to go on but I'll guess the 1920s as its date.

Who: The photo was sold with the text "Shoemaker" written on the front. Here he is: 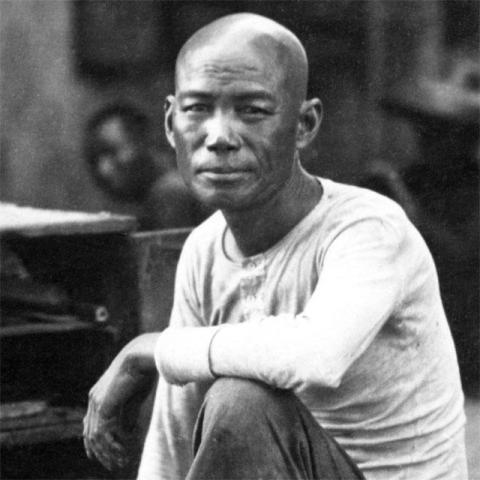 What: If you look between his feet, you'll see one of the main tools of his trade, the shoemaker's "last", a roughly foot-shaped piece of metal that he uses when making and repairing shoes: 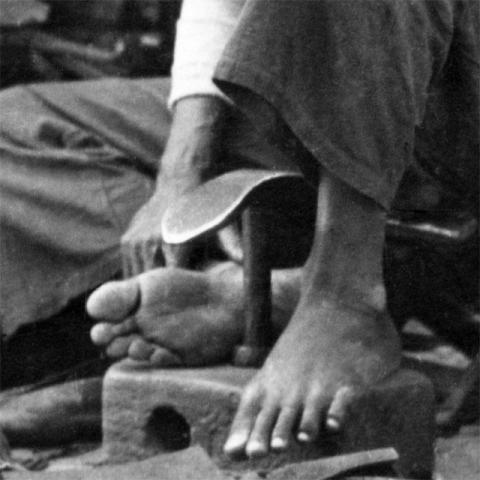 A shoemaker is also known as a cobbler, which leads us to the old saying:

"Let the cobbler stick to his last"

It's used to tell someone not to give advice about things they don't understand, and is based on an even older, Latin saying:

Shoemakers pop up in other sayings too, such as:

"Him that makes shoes go barefoot himself" [3]

If you look at the photo of the last again, you'll see that it certainly applies here.

The idea behind the saying is that people often fail to receive the benefits of their own expertise. It applies to their family too, giving us the more common saying:

There's a child in this photo: 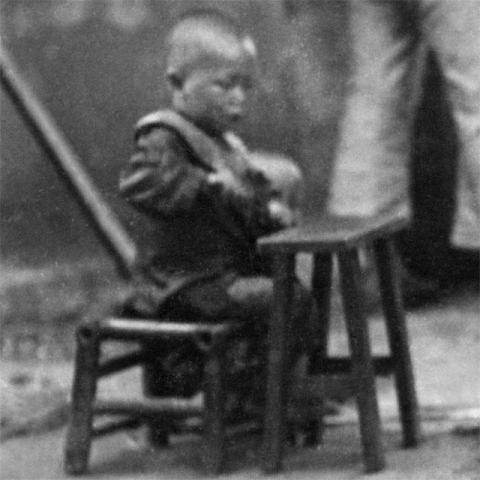 They're out of focus though, so it is difficult to see if they're wearing shoes or not. In any case, I doubt they're related to the shoemaker. The child looks as though he lives locally, with his stool and table. But the shoemaker is just visiting, as we can see from his equipment: 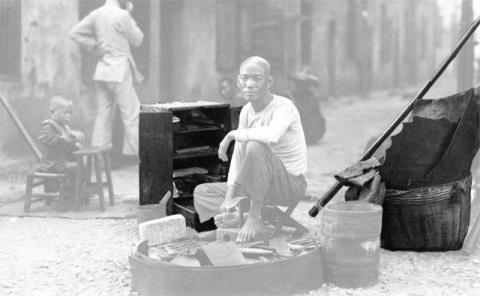 He uses the shoulder pole to carry everything he needs, setting up shop wherever there is business. He'll carry his tool cabinet on one end of the pole: 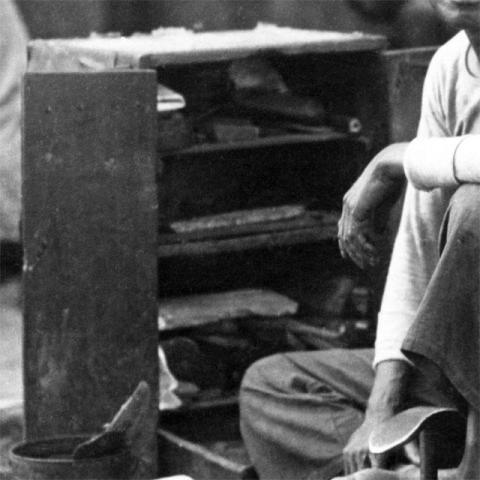 And balance it with a basket full of leather on the other: 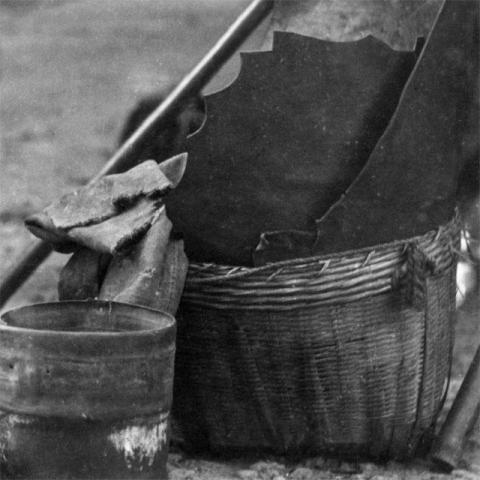 I wonder when this type of traveling craftsman disappeared from Hong Kong's streets? I asked my wife, who remembers growing up in Sham Shui Po in the 1960s and 70s. She says at that time people like this already had permanent stalls to work from. There were still lots of hawkers on the streets, but mainly selling snacks and other foodstuffs.

Do any of our older readers remember seeing wandering shoemakers like these?

Thank you to the readers who've written in with memories of these gentlemen.

I remember a travelling shoe repair man who used to come and sit on our verandah in Sek kong village in the late 1950s and repair our shoes. I also had several pairs of shoes made by a side of the street cobbler in Kowloon. I remember him drawing around my bare feet to make the pattern, and wondering why he had no shoes on his own feet as he was going to make some for me. I must have been 6 or 7.

The bo hai man would come to our four-plex on Hampshire Road and sit in the driveway repairing shoes all day. This was around 1963-68.

Wandering shoe repairers were still around in the early 1970s. One used to appear in front of our apartment block at Beacon Hill regularly at weekends and seemed to be kept busy.
He announced his presence with loud calls that echoed around the buildings. I cannot recall how he transported all his work gear. As we were at the top of the hill it must have been a struggle.

IDJ also sent a photo of that shoe repairer, taken in 1972. The basket and cabinet are almost exactly the same as in the photo from the 1920s: 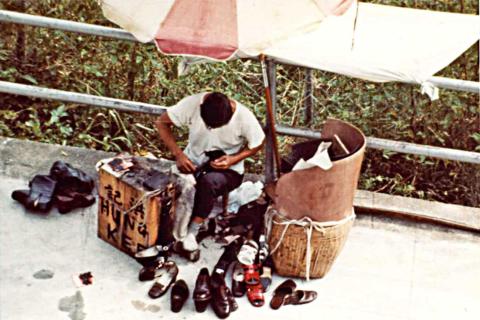 Robert doesn't remember seeing the shoemakers but does recall:

... itinerant knife sharpeners in Conduit Road calling out their trades...

I've also seen a knife sharpener on the streets of Kennedy Town, some time in the last three or four years.

“Shoemaker” is a fine photograph of a bygone age and a work of art, but IDJ’s photo is a “real life” action photo. His shoemaker is hard at work and surrounded by an array of shoes to repair like every normal cobbler. “Shoemaker” of the commercial postcard is strangely idle and seemingly has no shoes to repair. The photographer has arranged a careful composition in which nobody is moving. Would the central figure be a possible actor like the protagonists of the 1908 purchased photo “Coolies” at https://gwulo.com/atom/26714 ? His feet are not the usual broad, calloused feet of a workman treading the streets of a 1920s oriental city. I’m intrigued by the little boy, so well set up with bib, stool and table. Is he the shoemaker’s apprentice? What is the broad pole behind him that echoes that of the shoemaker himself? Will the little boy have to pick up his furniture and follow his master? It’s a fascinating composition.

Talking of knife sharpeners, I have also seen one such person in the Sai Wan Ho market in the last two years.  He only sets up shop in that district about once every two weeks.  My thought is that he moves from place to place drumming up business.  Can he be the same man in Kennedy Town?

I wonder if the knife sharpeners these days still yell 鏟刀磨鉸剪 to announce their presence. As a kid, the 豆腐花 and 裹蒸粽 men announcing their arrival was the sweetest!

Greetings.  This shoemaker was reading (could be newspapers) while waiting for customers or in between repairs.  He was well equiped for the task.  Here in my city, such trades still exist but only in a small outlet inside the shopping mall.  Wandering knife sharpeners show up very infrequently and only in summer time, and only in their gas-driven van.  The only business they might get is sharpening lawn mower blades so it seems to me more like a hobby than to earn a living.

May I add the goodies I used to see/hear while living in Kowloon -  the man who throws a small package of seasoned olives up into your balcony after you toss your 10 cent coin towards him.  His accuracy is about up to level 4 and he would try again if it lands outside your balcony.  Then, there was another man who called out Leung-Fun, I think he meant grass-jelly in black, and the thick wheat malt syrup 麥牙糖 presented to you in a small wooden stick.  Regards,  OldTimer 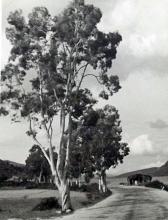