Extracts from letters from Ragnar Brodersen, 1982/84.

The Japanese attacked Hongkong only a few hours after the attack on Pearl Harbour, the first Jap planes dropping bombs on Kai Tak Airport about 8 o'clock in the morning of the 8th December 1941, Hongkong time.  I was then working for the Norwegian firm Thoresen & co in Hongkong, and during the 18 days before the surrender I put myself and my car at the service of the civil defence, acting as a driver for Capt Clark of the Volunteers.  He was the manager of the Hongkong Telephone Co.  When the Japs marched in on Boxing Day morning.  Capt Clark and the other British officers were sent to a military camp, and the British civilians were sent to the Stanley camp.  The Norwegians were then officially neutral as far as the Japs were concerned, so we were allowed to "go home" as the Japs put it.  That was not so easy, as most houses had been either destroyed or looted during the siege.  The building I had been staying in, half way up the Peak, had several direct artillery hits on it, and I lost everything save a few things which a Chinese friend had taken care of for me.  I teamed up with some other Norwegians in a house on Bowen Road.  Things were terribly difficult, our money was frozen in the banks, and we got no rations ... and there was every indication that we would be interned.

A fellow Norwegian, Capt Halfdan  Kwamso,  and I knew Mr Monaghan, who was a Canadian of Irish descent, claiming Irish neutrality so that he could accomplish the work as a go-between to help people  who wanted to escape, and he certainly did a magnificent job.  He told me that at that stage he could not give us exact details, as it was all hush-hush, but that he could arrange for our escape the following week, and were to be joined by a White Russian radio engineer whose name I cannot recall [Vallessuk] but we called him Bill.   He had apparently made some kind of invention which the Japanese were anxious to get hold of, hence his wish to get away.  [Monaghan was already making arrangements, on instructions from Waichow, for the escape of W. Vallessuk, and agreed to add the two Norwegians to the scheme.  Vallessuk had been sent to Hongkong just prior to the outbreak of hositilites to equip the Naval Motor Torpedo Boats with his invention, an Amp-Ohm-Volt  Meter.  None had been fitted before the Japanese attack, and Vallessuk sussesfully smuggled the invention out with him].

The three of us met in a house in Kowloon on a certain afternoon in February 1943. We saw two Chinese men walking slowly outside and this was our given signal.   We were not to speak to the Chinese but to follow them.   ...  We were led to a flat on the top floor of a Chinese house in Kowloon, in Nathan Road I think.  There were several other Chinese there, but no names were mentioned.  The plan was then that we should be taken, after dark, along a route overland across the border, which had been used in previous escapes.

We had to wait for the dark and the tension was high.  At that stage we had no idea of the existence of the BAAG, and simply had to trust our unknown Chinese friends.    However, while we were waiting for it to become dark enough a Chinese, who had been sent to out to see that everything would be clear  rushed in, telling us that the Japs had put up double guards near the planned crossing, possibly caused by a tip-off.  Well, we thought this would be the end to our escape, but we were told to sit tight as other plans would be made.  And lo and behold, after a couple of hours of nail-biting anticipation, we were told that the route had been changed.  All we had to do was to follow a Chinese guide and go where he went.  Thinking back on the events of the evening, I remember feeling impressed by the on-the-spot decisions taken by these young men - obviously the BAAG must have trained their men extremely well for them to be able to organize such a sudden and effective change of plans.

We went by bus to the Star Ferry on the Kowloon side, then by ferry across to Hongkong, and finally by tram down to Shaukiwan, beyond the Yacht Club.  Our guide signaled us to get off the tram, and in order to be seen in the dark he lit a cigarette.    We walked in pitch darkness behind our Chinese guide, and all we could see was the glow of the cigarette in his mouth.  He led us down to the water's edge where we could just glimpse two sampans.  We were ordered to lie flat in the bottom of one of the boats, our two guides got into the other, and Chinese coolie women paddled us across the harbour.  The journey took 29 minutes, but it seemed to last a lifetime.  Searchlights from Japanese ships in the harbour picked up the sampans as we glided by, sometimes dangerously close, but we had black rags pulled over us and were not detected.  e got safely to the other side on the mainland where the country side was bushy and uninhabited.

Here we were met by more Chinese.  We walked for hours in the dark, through dense bush, arriving in the morning in a small village where we were put up in a farmhouse all day.  It is worth mentioning that whenever we came to a river, in the middle of the night, in the wilderness, there was a boat waiting for us to take us across.    In a cove on Mirs Bay we boarded a junk manned, we were told, by former pirates, now on our side fortunately.  The pirate ship was fitted with 12 machine guns, and the pirate crew were obviously prepared for all eventualities.  We were stowed away in the stern for most of the journey, and after about five hours of sailing through the night we reached the coast of free China.

The BAAG had sent a positive caravan to receive us.  We were taken by sedan chair, bicycles and rickshaws to the BAAG forward post.  It was here that I met Major Clague and his team.  I gave him a secret letter which Monaghan had asked me to hand over on arrival.  After a few days the three of us plus a British regular soldier, Charlie Salter, travelled by an overcrowded river boat up the East River, then by all kinds of Chinese transportation until we reached Kweilin, the Headquarters of the British Army Aid Group.

Escaped from Hong Kong in February 1943 together with fellow Norwegian, Halfdan Kvamsø. 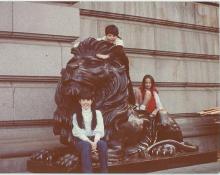