Found these passages about 34 Caine Road, but not sure where they go.

"Observations in the Orient : the account of a journey to Catholic mission fields in Japan, Korea, Manchuria, China, Indo-China, and the Philippines"

The next morning, Monday, as we docked at the foot of
the beautiful hill city of Hongkong I had the pleasure of meeting
for the first time a priest whom I had long known by correspon
dence, Pere Robert of the Paris Foreign Missions. One of his
assistants, Father Ouillon, was with him and soon we were
climbing the steeps of Hongkong to 34 Caine Road, the Central Procure for the great Mission Society of France.

As we turned into a delightful but rather neglected old garden
and mounted a long flight of steps to a mansion that looked
the worse for wear, FatherRobert remarked that this had formerly been occupied by the American Consulate. The coincidence was
interesting, but after entering I wondered if the stairs were
uncarpeted and the walls bare in the Consul's time. I found the
spirit of the house delightful and an explanation of its dilapidated

OBSERVATIONS IN THE ORIENT

state was given the next day when I was brought to the
new Procure in process of erection in a more convenient
neighborhood.

The new Procure, which is rapidly nearing completion, will
be in every way better adapted to the existing needs than the
former house with its spacious corridors and rooms. For its
purpose this new Procure has probably the best location in
Hongkong elevated, yet easily accessible from the wharves,
and at the same time isolated by a great parade ground on one
side and a park on the other. It will have accommodation for
a score of missioners and will contain a chapel with several
altars, also offices and living rooms. The expense of construction
will be met by the sale of the old property.

Travelling to and from Bethanie

Over the Peak to Pokfulum.

We made this trip by taking the funicular (the inclined
railway) to its terminus on the peak, and walking for about half
an hour on a perfectly laid footpath over the mountain, which
brought us to the entrance of a large, attractive structure
admirably set in a garden of trees and flowers with an outlook
to the south over the China Sea. This is one of two buildings
owned and occupied by the Paris Society for its several purposes.

.. We walked back to the city by a first-class road, stepping
aside every few moments at the bidding of clacking automobile
horns. Half-way along the line we met a funeral procession that
had halted on its way out to give the mourners a chance for
refreshment. The corpse, bulked in its matting, had been deposited in the shade by its bearers, who were enjoying their
rest and smoke as we passed. From that point on we saw here
and there small paper disks, supposed to be money expended
by the relatives of the deceased in his honor, if not for his benefit.

Don'e know if the numbering of Caine Road had changed over the years.  Present day #34 Caine Road appeared to be the site of Sacret Heart Cannosan College.

I believe the mentioned New Procure means the French Mission building on Battery Path.   The mentioned of "easily accessible from the wharves, and at the same time isolated by a great parade ground on one side and a park on the other" seemed to be it.  The park seemed to be the site of the future Government Offices.

From the discussion on Buxey Lodge, we know, I think, that road numbers in Caine Road changed in 1903 and 1934.

For what it is worth according to some of my family's research the South China Ladies Directory shows my great grandmother, Ching Ah Fung, her daughter and daughter in law living at 33 Caine Road in 1904. I assume it was her youngest daughter and the other her step-daughter Hannah. See www.thehongkonglegacy.com

As this research was not done by me I cannot vouch total accuracy.

The same source has the family later living at 53 Caine Road.

Does the fact it used to be

Does the fact it used to be the American Consulate help? Any idea where that was along Caine Road?

Since the article covers several places, probably best to leave it on it's own page here, but link to any Places mentioned (eg Bethanie above). It'll be linked back automatically by the "What Links Here" tab.

Might as well as the reference of the French Mission, "Missions etrangeres de Paris", which seem to be related to the mentioned priests, the Bethanie, and the former French Mission Building.

I am happy to vouch for the meticulous copying of the information, taken by my father’s nephew, Brian Lewis, from the South China Directory, vols. 1904-1906, lodged at the British Library. The names actually recorded are Mrs Olson 33 Caine Road; Miss L Olson 33 Caine Road; Mrs C E Warren 33 Caine Road. What used to be 33 Caine Road is now a photography shop opposite the Canossian Daughters of Charity Foundation, which was pointed out to me when I visited there. (The Foundation does indeed occupy the current 34-36 Caine Road and 33 seems to have been absorbed into the adjoining garages). For 1908 Brian Lewis has noted the address of the same three ladies to be 52, not 53 Caine Road. He found this information in a 1908 copy of the South China Directory stocked by the Society of Genealogists in the UK. 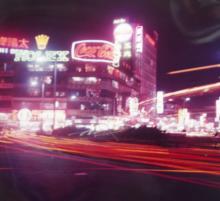