Betty became an actress and appeared on the London stage under the name CHIN YU; married her leading man, then had twins - a boy and a girl.  In 2000 the twins died within 6 months of each other.  Betty passed away a year or so ago.

What Happened to the brother twin?

Does anybody know what happened to Megans twin ?

David Williams actor [1924 - 1984]  and Chin Yu were married for thirty years before David Williams died, leaving behind his partner and twin children.

In the main body of the passenger list they are recorded as undocumented and their address in the US is c/o Uncle Jack Sue, PO Bx 426 Eugene Oregon.

Ross played guitar and worked for his parents in their muscials as well as in manageing the Australian Entertainment directory that David and Chin founded. After David died in 1984, Ross and Chin managed it until 1987 when they sold it. It is still going strong although now on line. Ross then went into partnership with Neva and another couple running ferries on Sydney Harbour. (The Proclaim and the 3 Rosman ferries) They sold their share to buy and run a number of bicycle shops "Cranks". Neva became a master with Sydney Harbour Ferries first with the cats that went up the Parramatta RIver and then up until now driving the Manly Ferry. Ross was studying for his engineering ticket to join her on the ferries and had just passed all the necessary tests when he died. 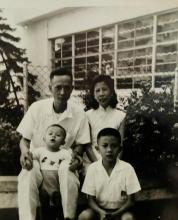