31 May 1942, Chronology of Events Related to Stanley Civilian Internment Camp

Slept very badly owing to stomach trouble. During the night we were woken by three rapid shots and much shouting.

Soon the Camp can talk of little else.

The tales grew bigger and bigger, and so did the tiger.

The Reverend Mackenzie Dow  preaches a fiery sermon at the church service. He claims that Hong Kong fell not just because of military shortcomings but also because of lack of 'moral fibre'. He believed that the Europeans had been living on 'the submerged nine tenths' - the Chinese masses - and had now been brought low so as to repent. A week ago the Reverend Frank Short had denounced ' our insolent national arrogance' and attacked the use of derogatory terms for black and Chinese people.

In town Sir Vandeleur Grayburn, living with his wife and about 80 other bankers and family members at the Sun Wah Hotel, tells the unadorned truth in a letter with today's date that will be posted by an American repatriate to his daughter Elizabeth:

(W)eight dropped from 200 to 160 lbs. Mary is somewhat thinner. Our cubicle is tiny, we sleep on a single mattress. Had no proper bath since December.

These words are blacked out by the Japanese censor.

John Stericker dates these shots to Saturday, May 30, but I think Wright-Nooth's diary is more likely to be correct, as Stericker telescopes the whole incident into one day. 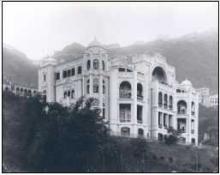