30 May 1942, Chronology of Events Related to Stanley Civilian Internment Camp

Last night Langston and Dalziel who were sleeping outside at the back of the bungalow, were woken up at about 5.00 a.m. by snarls and growls. Langston...got up to have a look. He went to the edge of the garden and looked down the slope to the wire fence. There Dalziel saw him leap in the air and fly back into the boiler room shouting 'There's a tiger down there'...

Next morning he's laughed at by other Bungalow C residents.

The Stanley tiger has arrived. None of the bungalows has any doors or windows, and soon laughter changes to fear.

George Wright-Nooth's diary cited in Prisoner Of The Turnip Heads, 1994, 97

Stanley Tiger: The Hunt For The Truth

Tigers are not indigenous to Hong Kong and from the start there were two main theories about the origins of this one:

1) it was one of those south China tigers who 'every decade or two' swam across from the mainland;

2) it had escaped or been released from a circus, perhaps one 'located in Causeway Bay'.

Surgeon Li Shu-Fan records that a tiger, which he believed to be a swimmer, 'joined the party by leaping down the terrace' at the Cheiyo Hotel. This tiger, which from the context seems to have appeared in 1942 (and in any case before summer of 1943 when Li escaped to Free China), was shot by an Indian after several days of hunting.

Recently a new twist has been added to the 'circus' theory: perhaps the Japanese deliberately released it. Some Chinese people had the idea that the sudden appearance of a tiger in a region marked the end of the old and the start of a new political order - in this case the end of the British Empire and the beginning of Japanese rule over Hong Kong and beyond.

But Bertram Bradbury, the butcher who skinned the Stanley tiger after it was shot, stated that he had no doubt the animal was wild. 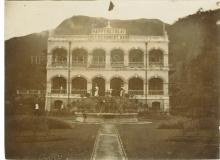