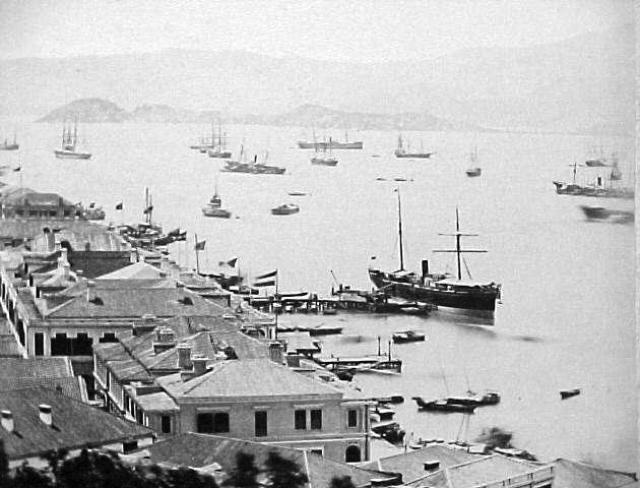 Recently, Stephen Kentwell (from www.oldchinaships.com) sent me this photo. He wrote that he has no information about the origin of this photo. He continued:

The steamship in the foreground looks rather like the HAILOONG which was active for Lapraik and Douglas S.S. Co. from 1871 to 1887. The pier is about where I would expect to see the Douglas S.S. Co pier along the Praya, and the third flag along the shore and the one on the ship's mainmast are consistent with the Douglas S.S. Co. flag, white ground with a Maltese cross at the centre.  The two other flags look rather like the German flag closest (black, white and red) and then the P&O flag.  There seem to be small jetties in front of these two flags, and perhaps they were staging points for tenders to transport people to German and P&O ships anchored in the harbour.

This is my answer:

Regarding the larger T-shaped pier, I also think this is the Douglas S.S. Co. Wharf (see the 1888 map on hkmaps.hk ((HK Map Viewer (hkmaps.hk)). The pier closer to the viewer (near the flag) is Pedder’s Wharf. It shows two (lamp?) posts at the end and a matshed near the praya. This is the new Pedder’s Wharf built in 1886. Both piers have been destroyed during the 1874 typhoon, the Douglas pier likely has been repaired while Pedder’s Wharf was rebuilt completely.

Therefore I think the photo was taken between 1886 and early 1890s.

Regarding the flags it’s difficult to judge as the photo is somewhat blurry. The attribution the P&O could be correct as the P&O building (3rd generation) stood there, it opened in 1887. Closer to the viewer is the Jardine/Matheson building from 1865, but the flag shown is not theirs.

Do Gwulo readers support my deduction? 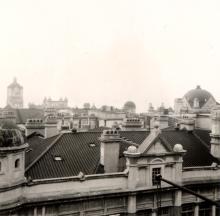