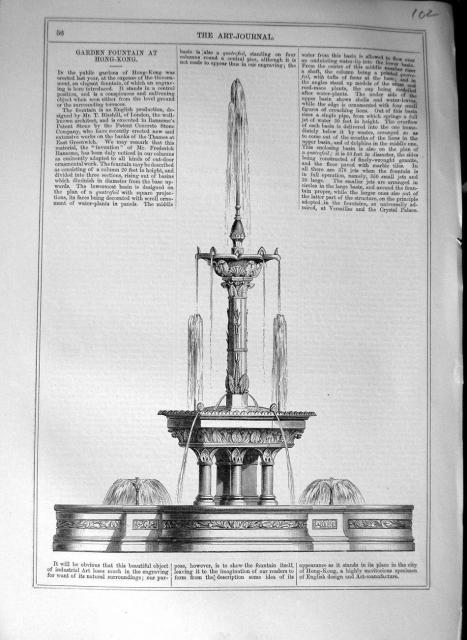 In the public gardens of Hong Kong was erected last year, at the expense of the government, an elegant fountain, of which an engraving is here introduced. It stands in a central position, and is a conspicuous and enlivening object when seen either from the level ground or the surrounding terraces.

The fountain is an English production, designed by Mr. Blashill, of London, the well-known architect, and is executed in Ransome's Patent Stone by the Patent Concrete Stone Company, who have recently erected new and extensive works on the banks of the Thames at East Greenwich. We may remark that this material, the “invention” of Mr Frederick Ransome, has been duly noticed in our columns as eminently adapted to all kinds of out-door ornamental work. The fountain may be described as consisting of a column 20 feet in height, and divided into three sections, rising out of basins which diminish in diameter from the base upwards. The lowermost basin is designed on the plan on the plan of a quatrefoil with square projections, its faces being decorated with scroll ornament of water-plants in panels. The middle basin is, also quatrefoil, standing on four columns round a central pier, although it is not made to appear thus in our engraving. The water from this basin is allowed to flow over and undulating water-lip into the lower basin. From the centre of this middle member rises a shaft, the column being a pointed quatrefoil with tufts of ferns at the base; and in the angels stand up models of the aram and reed- mace plants, the cap being modelled after water plants. The under side of the upper basin shows shells and water-leaves, while the edge is ornamented with four small figures of crouching lions. Out of this basin rises a single pipe, from which springs a full jet of water 30 feet in the height. The overflow of each basin is delivered into the one immediately below it by wastes, arranged so as to come out of the mouths of the lions in the upper basin, and of dolphins in the middle one. This enclosing person is also on the plan of a quatrefoil; it is 60 feet in diameter, the sides being constructed of finally-wrought granite, and the floor paved with marble tiles. In all there are 370 jets when the fountain is in full operation, namely, 350 small jets and 20 large. The smaller jets are arranged in circles in the large basin, and around the fountain proper, while the larger ones rise out of the latter part of the structure, on the principle adopted in the fountains, so universally admired, at Versailles and the Crystal Palace.

It will be obvious that this beautiful object of industrial Art loses much in the engraving for want of its natural surroundings; our purpose, however, is to show the fountain itself, leaving it to the imagination of our readers to form from the description some idea of its appearance as it stands in its place in the city of Hong Kong, highly meritorious specimen of English design and Art- manufacture. 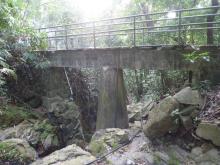