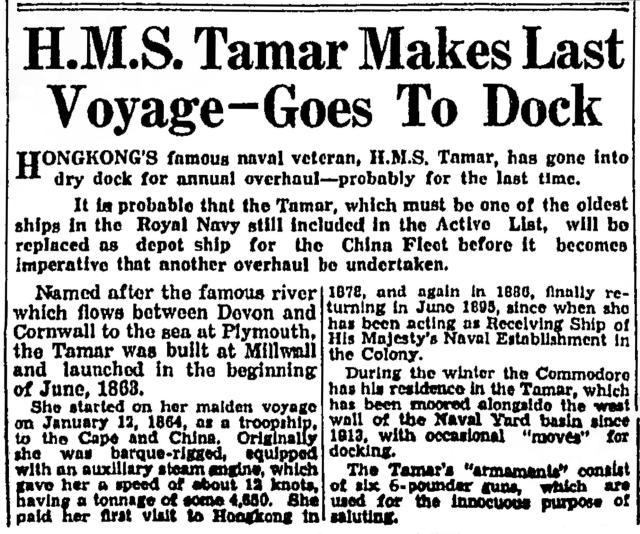 I cite this particular story in my book (promised before Christmas, probably not out till the New Year) because this was the 4th and last reprieve from scrapping in the ship's long service life. Of course it never happened because, as with her 3rd reprieve in 1913, a war got in the way.

Conveniently forgotten here therefore, is the story of the 3rd reprieve and the 'final' voyage for docking that had preceded it by a couple of months. And that despite the SCMP having covered that reprieve quite fully back in 1913!

And as ever the story was full of the mistakes the SCMP had and has been putting out about the Tamar pretty much since the paper's first issue.

The Tamar was launched in January, not June 1863.

She did not return in June 1895, but in August that year to become the Nominal Base Depot Ship - technically not merely the receiving ship.

And no source has her armed with more than 2 x 6 pdrs and with maybe 2 x 4 pdrs as well - but the armament, real or ceremonial, is something on which everyone was confused and which documentation does little to resolve.