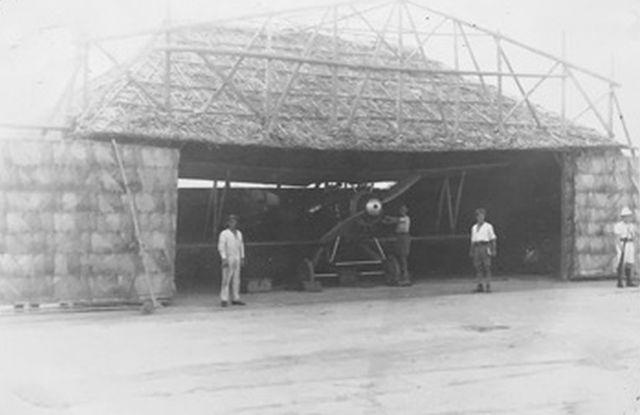 A second photo of Kai Tak Airfield that is dated from 1927, likely soon after the RAF had requisitioned the hanger. The aircraft in the hangar is a Fleet Air Arm/RAF Fairey Flycatcher.

The matshed hangar shown in the above photo can be seen here and was once used by the Brockman and Hetling's First Dutch Aviation Company. Its operation was short-lived.

Used for aerial sightseeing and the aerial dropping of adverising leaflets

The exact type is not disclosed,.although other similar Caudron aircraft were present in China

Thank you for the supplementary information.

Hong Kong has almost become accustomed to seeing hair raising stunts performed in the air by people who seem to have no nerves to worry them, and no bodies to worry about.

There is now in Hong Kong a gentleman who is anxious to prove that flying is really as safe and as uneventful a mode of progression as travelling in a tramcar, and as comfortable as motoring.  Mr. Brockman, Manager of the First Dutch Air Co. has come to Hong Kong bringing with him a nine-cylinder Caudron biplane, and a highly experienced aviator and mechanic, Messrs Hetling and Eilors, and they intend by permission of the Hong Kong Government, to give passenger flights starting from the Kowloon City Reclamation every day from January 6th to 19th.

The company has sent its chief manager and first aviator to Hong Kong to investigate the possibilities of opening up an aerial service between various ports of the Far East.

Mr. Hetling is prepared to take up passengers, two at a time on flights over Hong Kong or British territory, starting from Kowloon City Reclamation at $20 per head.  The residents of Hong Kong are thus afforded the opportunity of seeing their place of residence from a completely new point of view in comfort and safety.

Mr. Hetling, the chief aviator of The First Dutch Air Company, who is staying here with the manager of the company, with a view to exploring the possibilities of establishing aerial services throughout the Far East, is giving passenger flights in his Caudron bi-plane, starting on Wednesday next, and continuing for a fortnight.

Many people, when watching the Hermes planes aloft, have wondered what it is like “up there,” and what Hong Kong looks like.  They now have an opportunity of seeing for themselves, and under the guidance of a really experienced aviator who knows his job, and his machine thoroughly.

The Lai Wah Company of Des Voeux Road have taken speedy advantage of the presence in the colony of Mr. Hetling of The First Dutch Air Company, with a Caudron biplane in which he intends to make commercial flights over the Island.

Commencing this morning, a series of flight will be made by Mr. Hetling on behalf of the Lai Wah Company, starting at 9 a.m. daily, until January 11, with the object of distributing gift coupons from the air in all parts of Hong Kong.  It is unashamedly an advertising device, but one in which the public will share the benefit.

The manager of the Lai Wah Company informed our representative yesterday that no less than 20,000 handbills will be dropped from the plane during the course of five days flying.  Of these, 10,000 will entitle the holder to a gift from the Lai Wah Store and will be redeemable up to February 2, without reservation of any kind.

The Caudron biplane flew over the city at slow speed, dropping the Lai Wah gift coupons which were eagerly watched by large numbers of Chinese.  Many of the coupons were recovered and redeemed at the store, greatly to the surprise of the finders, who in the majority of cases, appeared to think the scheme was a swindle until they were actually in possession of their reward.

“HONG KONG AS AN AIRPORT-Prospects of an Aerial Service”

Now that Mr. Hetling has been flying in Hong Kong for over a week, it is of interest to record a few impressions that have been formed of the conditions and future prospects of flying in this locality.

The first fact which stands out is that any service that uses Hong Kong as a port of call, must either use sea-planes or must have least have floats fitted, to allow landings to be made on water.  Even with a small Caudron biplane, such as used on this occasion; which is able to take-off and land in a smaller space than most, there is none too large a space on the Kai Tak reclamation, and in years to come it is to be presumed that this space will be built over.

Mr. Hetling will make his last flight with passengers on Tuesday next, January 19.  After that, his machine will be crated for transport to Manila.

Mr. J. Brockman, the pilot of the Dutch aeroplane which flew over Hong Kong distributing handbills and coupons, and recently left for Manila on the same errand, has been charged there for violation of municipal ordinances which prohibit the distribution of handbills without a special permit.  The purpose of the permit being to keep the streets from being littered up. He was also charged with carrying special advertising on the wings of his plane without a licence.

Great Stuff. Many Thanks!

Looking again at an enlarged view of the aircraft, it actually appears to be a Fairey Flycatcher.

Comparing it with other images, the wing struts are the same, the propeller spinner is rare on this type, but the early ones in HK had them.

RAF Flycatchers were in Hong Kong in 1927 from HMS Argus according to some published image captions.

A closer look at the people in the picture shows them wearing peaked uniform caps. One is wearing a white engineer’s boiler-suit work overalls, the others are in shorts

The guard on the right is in uniform holding a rifle. Although he does not immediately appear to be Caucasian

It is probable the RAF requisitioned the hanger after Brockman/Hetling’s departure from Hong Kong.

Thanks for that as the original photos were dated to 1927. It is likely the photo was taken soon after the RAF had requisitioned the hangar for their own purposes. There is a photo here of the Fleet Air Arm/RAF using the Kowloon Naval Yard as a temporary seaplane base.

There is another blurred photo of the Kai Tak Bund which shows the hangar arrangement in the central area or near the southern seawall (cannot make it out clearly) but certainly not at the western end beside the nullah. Will amend the photos previously posted.