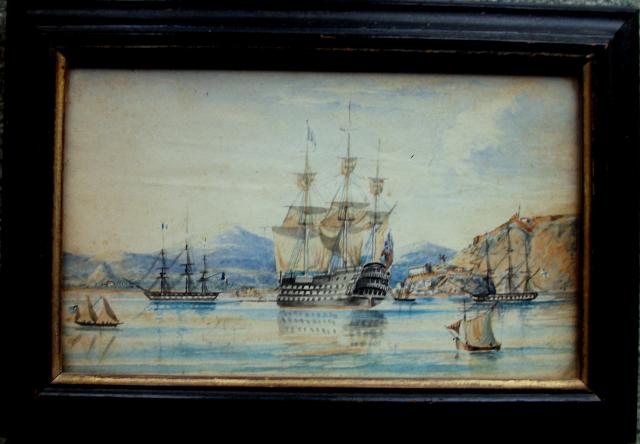 Is this Hong Kong harbour ? and if so this must be soon after the arrival of the new port ship H M S Hurcules 74 guns. She had arrived  perhaps October 1853 after leaving Sydney on 16 th August 1853. The artist of this well done watercolour is unknown but as the ship is promonant in the scene he may well have been an officer in her crew. A French frigate can be seen as is a Matheson merchant ship and an American cutter.

Is that a fortification on

Is that a fortification on the hill to the right? I don't recognise it as a Hong Kong landmark, but maybe another reader can identify it.

"as is a Matheson merchant ship" - are you looking at the flag on the right? I think Matheson's flag was white cross on blue background, so could it be a Russian ship: https://en.wikipedia.org/wiki/Russian_Navy_Ensign

I think David Bellis is correct that there is a large fortification on the hillside to the right, and this bears no relation to Hong Kong's defence structure in the period Hercules was here (1854-1865). I think I can also see a windmill on the hillside below the fort and above the town buildings - and I don't think HK ever had a windmill.

David is also correct that the ensign on the ship closer to land is Russian - had it been a Jardine Matheson ship the relevant flag would have been a house flag flown at the main truck and she would wear a British merchant ensign at the stern. The interesting feature of the French vessel is that a second tricolour is at the foremast truck - perhaps indicating a flag officer is aboard - a . The main objection to the suggestion of the Hercules (74) is that 74s were two-deckers (3rd rates) and this is manifestly a 1st or 2nd rate three-decker. If the depiction of the gunports is accurate (which may very well not be the case) then this is a c.100 gun vessel and hence a 1st rate. She is also showing the 'senior' ensign of the Red Squadron - so this dates the painting to before the abolition of the squadron system in 1864. What we are therefore looking for is a three deck, 1st rate of the Red Squadron. There's some sort of flag on the foremast and only a vice-admiral's flag was flown from the fore, so we could suppose we have a Vice-Admiral of the red in a 1st rate in a port with both a Russian and a French vessel that is a flagship. Much more to the point, between the British ship and the shore there is a mistico (two-masted lateener) or close relation, perhaps if this is the Eastern Med a felucca. So my hunch is that this is somewhere in the Mediterranean. If I were pushed, I'd suggest somewhere on the coast of Turkey and the late 1820s, when the French, British and Russians were buddying up against the Ottoman Empire in defence of the Greek struggle for independence. I'd like to have thought we were looking at the flagship of Vice-Admiral Sir Edward Codrington - but that was a two-deck, Bombay built 84, the Asia. There was no three decker in the Med until the Princess Charlotte (and there's a name!) in 1837-1841 by which time the bullying was of Mehmet Ali over Egypt/Palestine way - but the flag officer was Admiral Sir Robert Stopford, and he would have flown his flag at the main. Bother.

As noted, the Hercules arrived in HK in 1854 and was only partially, if ever, the RN receiving ship. She was mainly an army barracks and, later, the guard ship and a hospital ship - the official documents refer to 'harbour service'. There's an Illustrated London News piece (no. 603, vol. XXII, Jan 15 1853) that specifically states she was "ultimately destined to become a floating floating barrack at Hong-Kong during the sickly season". One German source (Karl-Heinz Rege "Dann sprang er über Bord": Alltagspsychologie und psychische Erkrankung an Bord britischer Schiffe im 19. Jahrhundert, Göttingen: Vandenhoeck & Ruprecht, 2014, p.335) confirms her in 1858, during the 2nd Opium War, as a hospital ship - so evidently a maid of all work. Her arrival also formed part of the general stiffening of defences in Hong Kong because of the Crimean War and the fears of Russian activity in the Pacific (HK sent a squadron to combine with a French squadron up in the area west of Hokkaido to try to eradicate a known Russian squadron). She was sold to Hop Tai Loon for breaking up on 22nd August 1865.

Anyway, I think not Hong Kong and not the Hercules, but somewhere in the Med and sometime between 1820 and 1840.

Hi Stephen, Thank you for your comprehensive research on this painting and I stand corrected on the Matheson flag. The painting is so accurate that I am sure it wont be long when some one will I D the port and we shall soon have our ship. I am impressed with your knowledge on the naval flags and your just the man I need to ID a flag signal on another painting so will try to contact you out of this forum as it is unrelated to China. Vaughan

Hi all interested parties, This is infact H M S Princess Charlotte at Beirut Harbour after hostilities finished in late 1840 during the first Syrian war. The wind mill is placed exactly to an 1840's map I found and the Frigate to the right is Russian. Its ironic that this ship spent many years as a store ship in Hong Kong harbour. The comments all helped to solve what this painting was, thanks. Vaughan