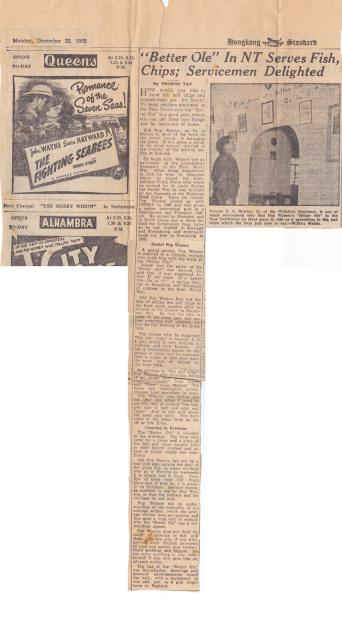 That's a good find, thanks for posting! Here's the text:

HOW would you like to have fish and chips and minced-meat pie for lunch? To most soldiers stationed in the New Territories the ‘‘Better Ole" is a good joint where one can get these two things and be reminded of home.

Old Pop Watson, as he is known to most of the boys in the Army camps, is managing the place. It is a place, a shack, to be more correct, situated in the vicinity of the railway station at Fanling.

To begin with. Watson was an ex-trooper in the Lincolnshire Yeomanry in the First World War After being demobilized in 1919, he went to Shanghai where he joined the International Police Force with which he worked for 24 years. During the Pacific War he was Interned by the Japanese at the Haiphong Road Camp. Upon his release. Pop Watson joined up with UNRRA in 1945 and was given a rather interesting post as a Distribution and Transport Officer. He served in Shanghai and in North China and at times behind the Communist lines. Later on he was drafted to Kwangsi and Kwangtung and eventually made his way to Hongkong in 1949.

A genial person, Pop Watson is married to a Chinese woman who helps him with the work at the "Better Ole."

Asked how the name or the "Better Ole” was derived, he said that it was suggested by this: If yer know of a better 'ole—Go to it!" a saying familiar to thousands and thousands of soldiers in the First World War.

Old Pop Watson first had the idea of selling fish and chips to the boys some months after he arrived in the Colony in December, 1951. He took his idea to some of his army pais and before sometime had elapsed he had the full blessing of the Army here.

The reason why he suggested "fish and chips'' is because it is a dish which is very familiar to soldiers and very English. It has a tremendous appeal to the people at home and he reasoned that it ought to and does have the same sort of appeal to the boys here.

In addition to “fish and chips" Pop Watson also provides beers, of all kinds and from many countries - "Asahi" from Japan and “Tiger" from Malaya. His beers are reasonably priced, cheaper than anywhere in town.

Pop Watson was telling me the other day when I went to see him that at present “the biggest sale is ham and eggs and chips." And he also sells about 300 meat pies daily. The boys come to his place from as far off as Sek Kong.

The "Better Ole" is crowded in the evenings. The boys who came for a drink and a plate of the fish and chips usually sing to their hearts’ content and go back to Camp happy and comforted.

Old Pop Watson has put up a real pub sign outside the door of the place but, to many civilians who go to Fanling on weekends it is utterly lost to them. Very few of them visit Old Pop’s place and. if they do, it is usually on Sundays. Another reason, as confided to me by Pop Watson, is that the soldiers and the civilians do not mix.

Pop Watson has an understanding of the mentality of the average soldier, which the average civilian does not possess, and that goes a long way to explain why the “Better Ole" has a tremendous appeal.

Pop Watson does not limit his range of catering to fish and chips. He can also, if you wish, provide such English delicacies as tripe and onions, pigs' trotters, black pudding and faggots. He can serve anything to your satisfaction if you will give him an advance notice.

The bar of the “Better Ole" has Bairnsfather drawings and brewers’ advertisements round the wall, with a dartsboard at one end, just as a pub might have in England.

Private F. E. Bowley. 22. of the Wiltshire Regiment, is one of many servicemen who find Pop Watson'* "Better Ole" In the New Territories an ideal place to visit as it specialises In fish and chips which the boys Just love lo eat.—Willie's Studio.

I bet the HK Standard didn't

I bet the HK Standard didn't print the story of the incident a few years after this report, whereby a well-known "gwailo" HK policeman took great exception to the noise emanating from the jukebox in the Better 'Ole.

He expressed his displeasure by firing a number of shots from his service revolver into the offending machine! Yes, I do know the identity of the cop. No, I'm not going to tell you! 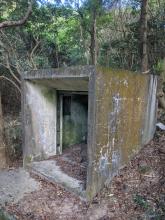 PWD or WD Structure - Side View.jpg