Mountain Lodge Damaged by Typhoon of 1874 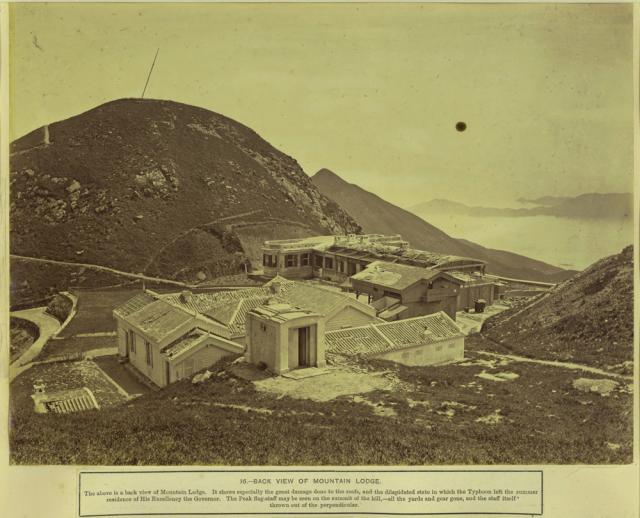 From the set of photos taken by A Fong after the great typhoon of 1874 (courtesy of Mr HF Siu).

The flagstaff at the Peak was seen leaning at an angle, a sad signal for ships miles away of the ravages to which the Colony had been subjected.

The Governor's bungalow was completeltely unroofed except for one room. (The Governor had been staying at Mountain Lodge at the time.)

This interesting photo shows three main buildings at the site. For ease of reference I'll call them left (the white walled bungalow), right (furthest from the camera) and middle (the darker structure between the left and right). The document "Crown Property (Buildings) Hong Kong" for 1873 listed them as follows;

So which building was which?

Firstly the Governors Bungalow. Common sense suggests this will have been the grandest and best positioned at the site. On that basis it should be the one on the right with the fantastic view over Lamma Channel. The HK Daily News of 24-9-1874 provides some corroboration in its report of the damage caused by the huge typhoon of 22 & 23-9-1874 as it says that the Governors Bungalow had been "completely unroofed with the exception of one room". By zooming in on the three buildings, it does seem that the one on the right suffered the most roof damage.

That leaves the Aide-de-Camps Pavilion and the Officers Quarters. The Government Gazette of 17-10-1874 mentioned both;

"The Aide-de-Camps bungalow has been so destroyed as to be no longer tenantable, and it will therefore have to be pulled down......The 'Pavilion' , or Public Officers' Quarters, a wooden frame house, had one of its sides knocked in, and the tiling stripped off the roof."

The Gazettes reference to the Officers Quarters as the "pavilion" is a bit confusing. Surely, both the Aide-de-Camps place and the Officers' Quarters can't have been called pavilions? Anyway, what's clearer is that the Aide-de-Camps place is referred to as a "bungalow", whilst the Officers' Quarters is referred to as a "house". The fact that the building on the left is a bungalow is obvious at first glance, and if you look closely at the middle structure you'll see it had two storeys, so could be called a house. This is easier to see in the photo of both buildings from the front appearing here ;

Based on that logic I'll say that the building on the left was the Aide-de-Camps residence, and the middle building was the Officers' Quarters. Corrections welcome.

The "Crown Property (Buildings) Hong Kong" for the next year, 1874, lists only the Governors Bungalow and the Officers' Quarters, so it seems the Aide-de-Camps place was indeed demolished due to the damage sustained in the typhoon. Subsequent versions of the "Crown Property" list show no further change until 1879 when mention of the "Officers Quarters" is replaced by "Governors Office" with a completion date of September 1879.

This pic, dated 1890, shows Mountain Lodge in the distance. Zooming in reveals that both the left and middle buildings have disappeared, but there's a new building where the middle building had been. I wonder it that's the new Governors Office?

Buildings below battery - side view