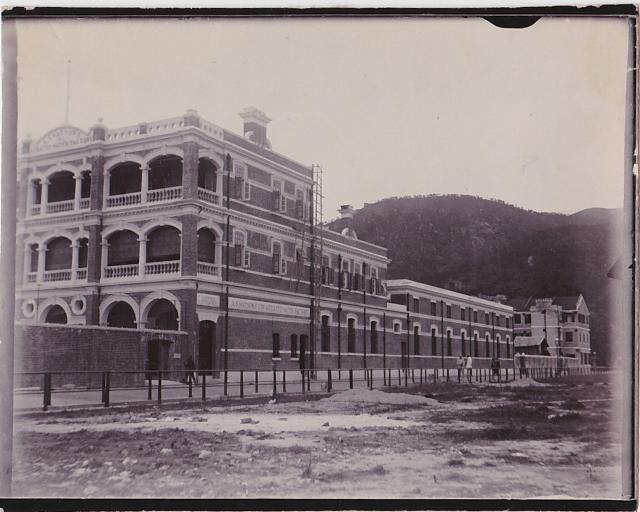 My Grandfather John Ambrose Jupp was a director of John D Humphreys and Sons, the firm that acquired A.S. Watson & Co in 1871 and built it up as a major supplier of medicines and aerated waters in the region by 1900. Can anyone tell me exactly where the aerated water factory illustrated was located at that time?

As 80skid says, this looks like the North Point site, with Watson Road running along the side of the building and recently reclaimed land in the foreground.

We've got Mr Jupp in Hong Kong til 1911 at least, according to the Jurors Lists. Do you know when he left?

If you've got any more photos or information about his time in Hong Kong you can share, we'd enjoy seeing them.

Some present day bits and pieces.

The present day Sea View Building used to be Watson's Building. I remember Watson's used to have a soft drinks production plant there in the late 1960's/early 1970's

I could not recall since when was the building renamed to Sea View Building. I could only recall it was already called Sea View Building in the 1990's. Older generations of Causeway Bay/North residents would still call it Watson's Building anyway....

John, thanks for the extra information about your grandfather. As he left in 1911 he may have left Hong Kong before this building was finished, but as he continued working with J D Humphreys he might have been sent a copy of this photo to show its completion?

If the original copy of this photo is a sharp one, please can you have a look at the front of the building with a magnifying glass? It looks as though there is a year written between "A S WATSON'S" and "AERATED WATER FACTORY", but I can't see it clearly enough to tell what it is.

Oh Dear! I cannot read it with absolute certainty on the original, but my wife and I think it is 1911. John Jupp may well have been sent the image, that's a good suggestion.

On a couple of other images I have tried to send I got the yellow triangle symbol and error message 'hashtag 2032' when trying to upload. Am I doing something wrong that you can advise me on? Excuse the naive question, I'm not experienced in manipulating images. Many thanks.

re: Date on Watson Building

Thanks for checking. It could well be 1911 if it formally opened in 1912. I've added in the Place for the North Point factory, as so far the clues point to it being the building we're looking at, and set the date for this photo to be 1912.

Sorry to hear you're having trouble uploading photos. Please could you send one of the problem photos to me by email:

I'll try uploading it to see what the problem is. Please also let me know at which step in the instructions (http://gwulo.com/node/2076) the error message appears.

I am in possession of various old Watsons photographs in my private family album and a detailed history of A.S.Watsons Co Ltd, Hong Kong. My father worked for Watsons from 1900s to 1964. He initially worked at Watsons China located at Fancun, Guangzhou, China and at the Shameen (Shamian Island), Guangzhou up to April 1945 when Watsons closed all plants in China. My father was transferred to the Hong Kong Aerated Water Plant at Watsons Road, North Point, Hong Kong. The factory manufactured various well known aertated soft drinks, distilled water and medicine. He worked there until retirement in 1964 when Watsons was acquired by John D Hutchison Ltd and the plant at Watsons Road, North Point was demolished and the new Seaview Estate constructed at No. 2-8 Watson Road by Hutchison Properties Ltd. Watsons continued to be present at Watsons Road until 1965 when all manufacturing was relocated to the Kowloon City plant and then finally moved to Shatin where the present headquartes is located.

Alexander Skirving Watson took over Hong Kong Dispensary in the 1860s and later changed it's name to A.S. Watson.The business—still only that of a chemist and druggist—was sold in 1870 to a Mr. Bell, who, in turn, sold it to Mr. Arthur Hunt. Mr.John D. Humphreys became the sole proprietor, and in 1876 an small aerated water factory was set up at Wellington Street, HK. In 1886 Watsons was incorporated. Mr. John D. Humphreys ceased to be general manager in 1896, and his firm of John D. Humphreys & Son became general managers. The partners in in 1908 was John D. Humphreys & Sonm, Messrs. Henry Humphreys, John. A. Jupp, and E. E. Humphreys. All these directors were instrumental in modernising and automating the Watsons soft drink plant and the name Watsons became famous througout Hong Kong and Asia.

I would be glad to provide whatever information sought by the gentleman here whose father was John A.Jupp a director of John D Humphreys & Sons. Do contact me soon as I would be emigrating to UK. Glad to know that the descendants of director J.A. Jupps is researching the history of his grandfather at Humphries and Watsons. I would be happy to render whatever assitance desired. Thank you.

Thanks very much for your most helpful comments and information, fascinating to hear about your father's long association with the company. I am most interested in the period between 1886 and 1914, during most of which my grandfather John Jupp was a manager and partner in J.D. Humphreys  involved, as you say, with the development of Watsons. John Jupp left Hong Kong about 1911 to run the Humphreys office in London. My mother was born in Hong Kong in 1905. My uncle John  Edmund Jupp, also born in HK, worked for Humphreys from the mid-1930s until he was captured by the Japanese at or near Repulse Bay while serving with the HK Naval Volunteers. He survived the sinking of the Prisoner of War ship the Lisbon Maru but died in October 1941 shortly after reaching Japan, I don't know to what extent he was involved with the management of Watsons - he may have had other duties in Humphreys.

I would be very interested to see any photographs or receive any information about either my grandfather or my uncle and their involvement with both Humphreys and Watsons.

Good luck with your plans for emigrating. How soon will that be?

Thank you for the extra information about Watsons. If you can share any of photos of Watsons or Hong Kong with us, we'll be very pleased to see them. Here's how to upload a photo to this website: http://gwulo.com/node/2076

I'm also interested to see if you can add anything to our collection of diaries and memoirs about life in Hong Kong, especially during the second world war. You can see the copies we have at: http://gwulo.com/list-of-diaries Maybe your family collection has something similar?

A. S. WATSON & CO., LTD.The firm of A. S. Watson & Co., Ltd., chemists, druggists, aerated water manufacturers, &c., is one of the largest business concerns in the Far East, consisting, as it does, of thirteen European shops and upwards of forty Chinese branches, giving employment to fifty Europeans and five hundred Chinese. Its origin dates back to the cession of Hongkong to the British, when a naval surgeon opened what became known as the Hongkong Dispensary for the use, principally, of sailors and soldiers. In the fifties, new premises were opened in Queen's Road, the concern having by that time passed into the hands of Mr. A. S. Watson. The business—still only that of a chemist and druggist—was sold in 1870 to a Mr. Bell, who, in turn, made it over to Mr. Hunt and Mr. John D. Humphreys. The latter gentleman afterwards became the sole proprietor, and in 1876 the first step was taken in the direction of expansion by the establishment of a small aerated water factory. Branches were opened in various districts, and the Chinese name of the firm, the Tai-yeuk-fong, became known all over China. In 1886 the concern was floated as a limited liability company, with a capital of nearly four lakhs of dollars. Mr. John D. Humphreys ceased to be general manager in 1896, and his firm of John D. Humphreys & Son became general managers. The capital was raised to $600,000 in 1890, and was further increased in 1904 to $900,000. The present partners in John D. Humphreys & Son are Messrs. Henry Humphreys, J. A. Jupp, and E. E. Humphreys.The chief offices and premises of the firm are in Alexandra Buildings, one of the largest and most imposing blocks in the Colony, built upon the most approved modern lines. In the immediate vicinity are the Company's warehouses and soda water factory. The information can be found here:

The person who can give you

The person who can give you detailed information is Mr. A. J. Stephen who was Manager of A. S. Watsons during the 1940s. He was imprisioned by the Japanese troops during the war and he was the first to arrive back at the Watsons factory in North Point after the war to reclaim the factory from the Japanese. Mr. Stephen retired from Watsons during the 1970s and he left Hong Kong permanently saying that he would continued to research about the history of Watsons in England. In the 140 years anniversary supplement of the Star Newspaper in Hong Kong on 23-05-1970 Mr. Stephen stated that ''Mr. Humphreys was a man of vision and enterprise who rapidly expanded the company..''. A copy of this supplement of Star Newspaper can be seen at the Central Library, Hong Kong.I am sure Mr. Stephen would have information about your grandfather John Jupp and your uncle John Edmund Jupp, but I do not know the whereabout of Mr. Stephen and you would have difficulty locating him. I am not even sure if he is still living as he would be of advanced age..The grave of John David Humphries of Kent, England is at the Hong Kong Cemetery at Happy Valley, Hong Kong. Grave No. 19/2/2. Died 1940-02-28 Aged 46.The grave of Arthur Perkins Nobbs, of Newport, Isle of Wight, England Assistant Manager of Watsons from 1888 to 1918 is located at Hong Kong Cemetery Grave No.12A/7/17 died 1918-05-13 Aged 59.Watsons 1880-1990s:John David Humphreys

The A. S. Watsons pharmacy was leased in 1871 to Dr Humphreys and his partnet, Dr. Arthur Hunt by the Watson family.Then in 1889 about 18 years after the operation of A. S. Watsons, Dr, Humphries fell gravely ill in Hong Kong and was attended to by Dr. James Cantile who was the dean of the Hong Kong College of Medicine for Chinese. Dr. Cantile saw that the patient required overnight attendance and had therefore arranged two of his best students, who were alsoin need of some financial aids, to do the job. The two were Sun Yat-Sen (the founder and first president of modern China) and Kong Ying. Source:

The pictures I have are copyrighted by newspapers which are still operating and it would be incovenient for me to post them here. I don't think they include photos of Mr. Humphreys of Mr. Jupps. Sorry that say that these are all the information I can provide at present.

Thanks so much for all the excellent information. We visited the HK Record Office three years ago and found useful facts about where the Jupps lived. We did not go to the Library and will do next time we visit which I hope will be very soon.

Absolutely fascinating to know that J.D. Humphreys was looked after for a time by Sun Yat-Sen! The Humphreys connection is very strong in our family's history as both the Jupps and John Jupps's wife's family the Clarks were linked through several marriages.

A. S. Watson & Co, commenced the production of aerated water in their new factory beyond Causeway Bay. The factory is believed to be the largest aerated water factory in the world. 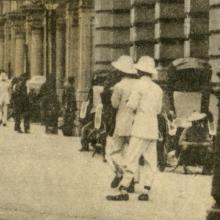