Procession inches along a crowded street 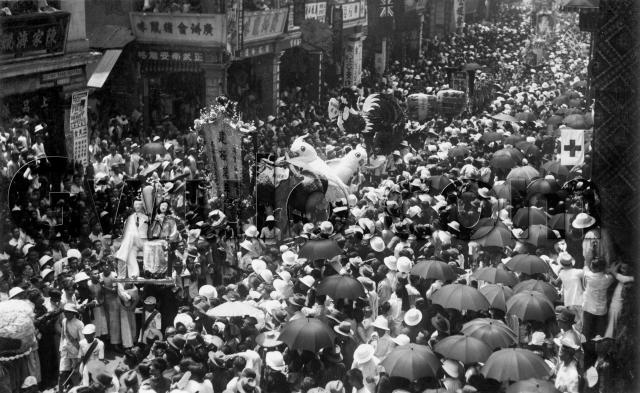 When: It could be any one of several large processions held in Hong Kong over the years, but luckily there's a clue in the top-left corner of the photo: 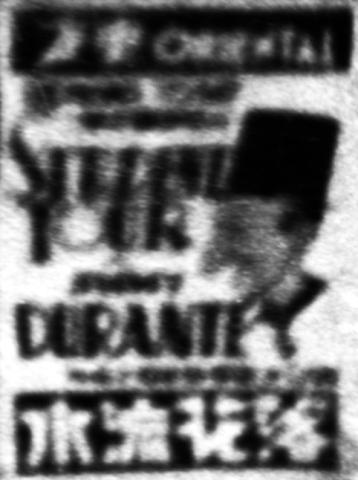 I've straightened it up a bit, so hopefully you can read it's a poster for the 'Student Tour' movie, starring Jimmy Durante and showing at the Oriental Theatre. That film was released in October 1934 [1], dating this photo to sometime in the mid-1930s.

The Silver Jubilee of King George V was in 1935, so that's a strong possibility. Luckily we have a film clip of the procession (click here to view), and even more luckily the section of the procession shown in the photo also appear in the film, at the 1:21 mark.

The start of the film shows a banner embroidered "Silver Jubilee Procession, 6th May 1935". So there's our date.

What: This was just one part of Hong Kong's Jubilee celebrations, but for many it was the highlight. Here's how the next day's newspaper described it [2]:

[...] it would be no exaggeration to say that all Hong Kong turned out to watch what must be the greatest spectacle of its kind ever staged in the Colony.

[...] There is so much to be written about the procession that one finds it rather difficult where to start but pride of place must definitely go to the monster dragons, for never in the history of Hong Kong has such long ones been constructed. There were three of them [and each one] had a "crew of about three hundred men who were all attired in their "gala clothes".

Who: The people in the procession must have been exhausted by the end of the day. Sure, the carrying work was rotated among teams, but look at the route they took [2]:

Starting at Belcher's Street in Kennedy Town to Queen's Road West; along Queen's Road to the Wanchai Market; then to Wanchai Road, and passing the back of the (old) No. 2 Police Station. to Morrison Hill Road and the Tramway Station, Causeway Bay; then turning to the West to Yee Wo Street, and passing the Lee Garden, to Hennessy Road and Arsenal Street; then to Queen's Road to the old City Hall; then to Des Voeux Road; then passing the side of the Empress Hotel to the Praya at Wing Lok Wharf, and then along the Praya to Catchick Street, where the procession was dispersed.

That's tiring enough just to walk, let alone while carrying an unwieldy pole with a figure on top: 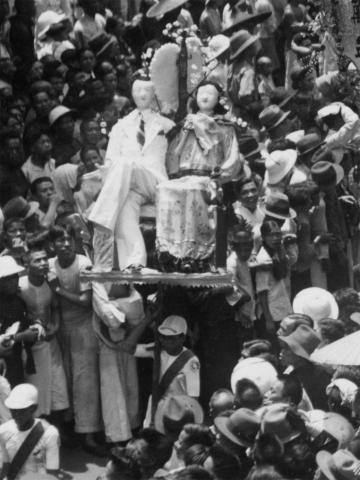 Where: Above the movie poster is a street sign, showing we're on Queen's Road Central. And just to its right is the entrance to a street or lane, but unfortunately no name is visible, so I'm not sure which one it was..

From the route described above, we know the procession came from the Kennedy Town direction, so in this photo we're looking west. Finally there's a distinctive pattern on the building at the right of the photo: 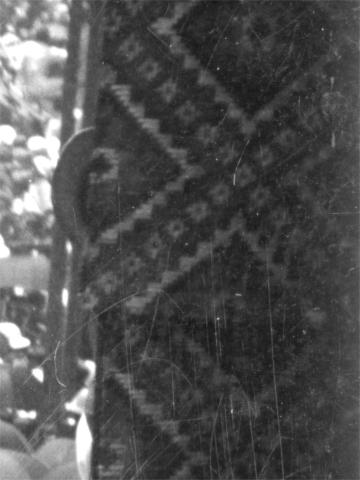 Can anyone tell us whereabouts along Queen's Road Central this photo was taken?

Re: There is a clue in the photo

Just above the U watermark there is a shop called 廣洲臘味。 I googled it and found somebody has another old photo (the 14th from the top) showing a shop with the same name.  That blog mentioned it was around Jubilee Street and QRC.  I am uncertain if the building shown was the same building though as the pilars looked different.

Yes, the photo is of the 1935 KGV Silver Jubilee Procession. The street on the left is Cochrane St facing the 2nd generation Central Market.

A similar photo of the area showing the procession of the dragon. 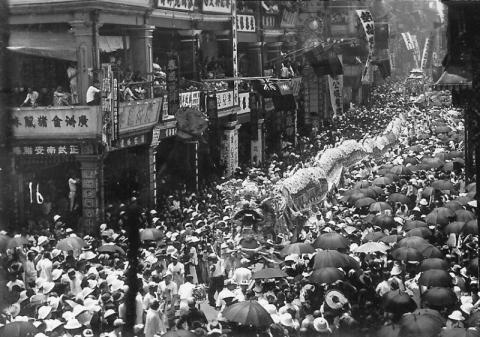 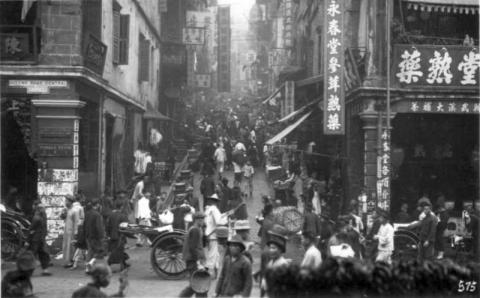 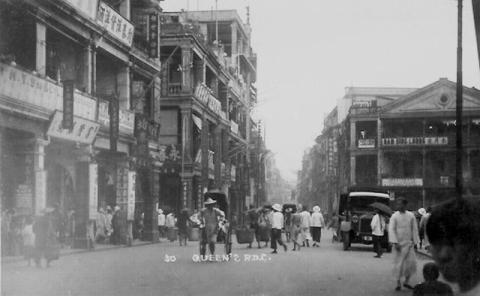 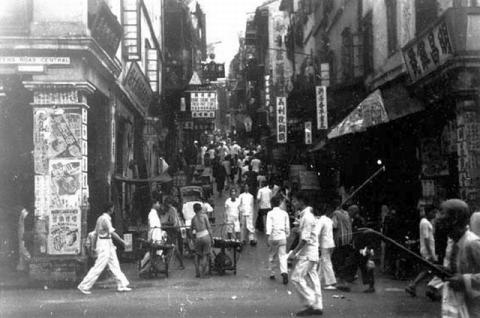 Thomas, I think the photo you linked to is a different building, so the company probably moved building but stayed in the area. It certainly gives a clue to the right area.

Moddsey, thanks very much for pinpointing its location.

I wonder if the photographer was upstairs in the building at the south end of Q. Victoria Street, and then the pattern we see down the right edge of the photo is some decoration on the Central Market building?

The location of the photographer would be correct. I think the floral patterns are the sides of a decorative chinese triumphal arch or 'pailau' (facing Queen Victoria St) that was erected over the entrance to Central Maket, QRC side by the stall holders of the Market.

Pailau erected near the 'Crossroads'. Note the floral decorations at the base at one of the levels of the tower is similar to the patterns by the side of Central Market. 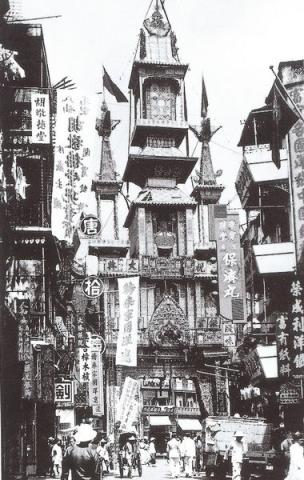 Thanks Moddsey, nice to have that mystery solved. Now we know what we're looking for, here's another photo we have of a pai lau. It was taken almost twenty years later, for the coronation of QE2 in 1953, but it has a similar geometric pattern: 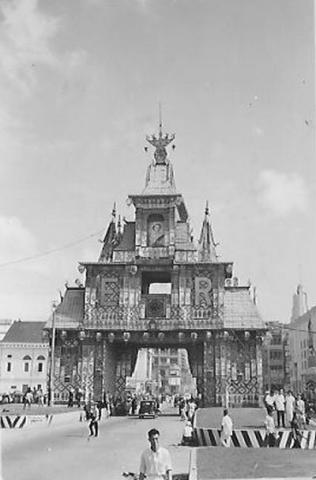 Two theatres can be seen in this picture

Alhambra Theatre [平安戲院]is on the right hand side of the picture, while the Po Hing Theatre[普慶戲院] is on the left hand side.

That's a good find, thanks

That's a good find, thanks for posting. I'd thought the arch was built over the side street, so it's good to know it was actually built across the front of the market.

Where the superintendant of the botanical garden talked about it

http://sunzi.lib.hku.hk/hkgro/browse.jsp, administrative report, appendix N, point 4. Public could see the Julibee from the botanical garden itself (from above the current fontain terrasse I suppose) 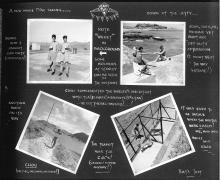